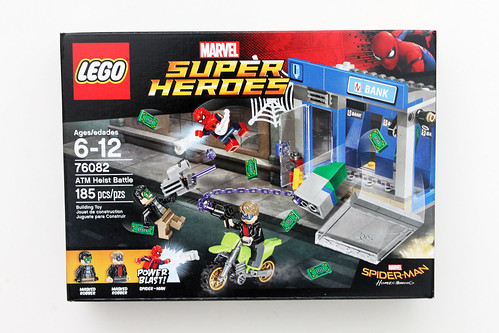 Spider-Man: Homecoming cruised their way to a $117 million opening weekend and had a steady second week in theaters. There are a couple of LEGO Marvel Super Heroes sets that accompany the movie as LEGO has been doing traditionally for a while now and the first set I’ll be reviewing is the ATM Heist Battle (76082). It contains 185 pieces and retail for a modest $19.99. 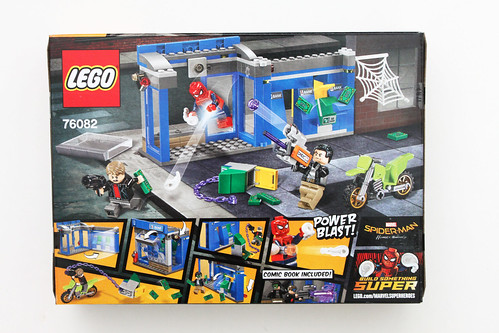 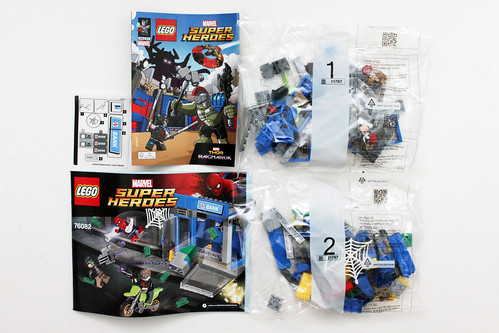 There are three minifigures in this set: Spider-Man and two masked robbers. This version of Spider-Man has a slight update from his Civil War counterpart from last year. Some of these updates include a new spider logo on both sides of the torso and the belt on the back. The rest of the minifigure is pretty much the same as before. His accessories are a couple of white Power Blast pieces which represent the webbing from his web shooters. The idea is to hold the back part of them and fire off the hands. 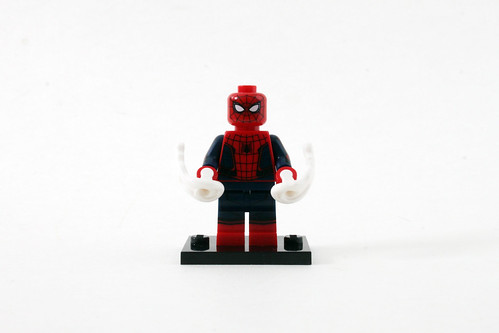 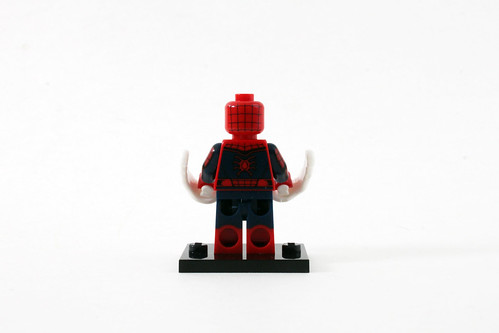 As seen movie, there are some masked robbers that are stealing from a bank and they all wear masks of some of the Avengers. One of the robbers in this set wears a Captain America mask. The printing of the mask is different from what was seen in trailer and movie as the LEGO version only covers the eyes while the movie version covers the whole face. On the other side of the head, he has a black eye and chipped tooth. The torso used for him is the same one that Michael Knight uses in the LEGO Dimensions Knight Rider Fun Pack (71286). 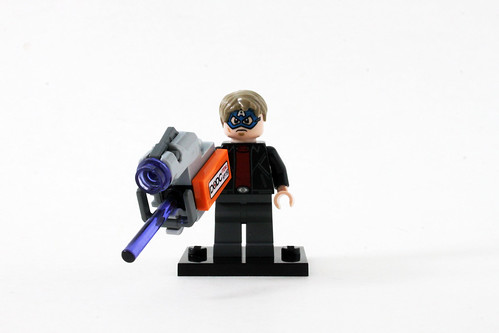 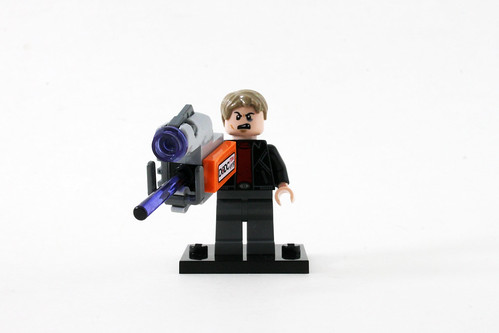 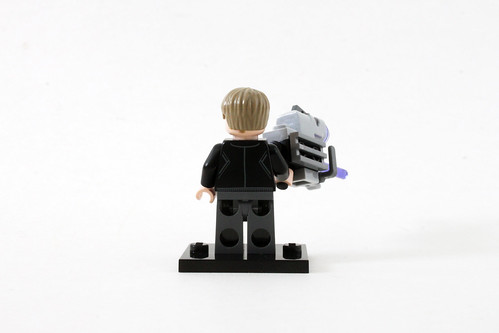 His accessory is one of the Toomes’ advanced weapons that uses Chitauri technology. There’s an unassuming sticker that is used on the side with the letters DODC (Department of Damage Control) and item: AF15. If you’re a comic aficionado, you would know that AF15 is a direct reference to Amazing Fantasy Vol. 1 #15 which is the first appearance of Spider-Man in comics. 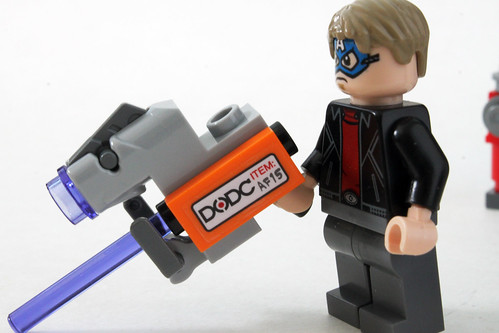 The other masked robber wears a full-faced Hulk mask. This mask is more accurate to the movie than the previous minifigure. The other side of the head shows him with a bandage and a bruise on his face. His torso is the same one that was used for criminals in previous LEGO City sets. His accessory is a hybrid-tech chain which uses a trans-purple chain. This chain is in only used in one other LEGO Elves set so seeing it used again is great and easier to get with this cheaper set. 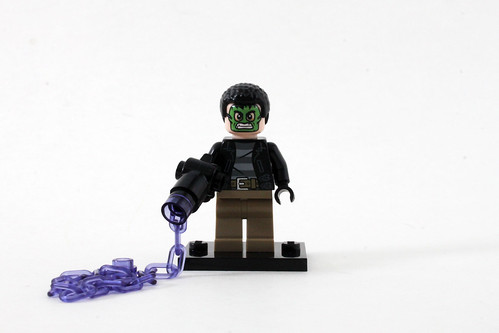 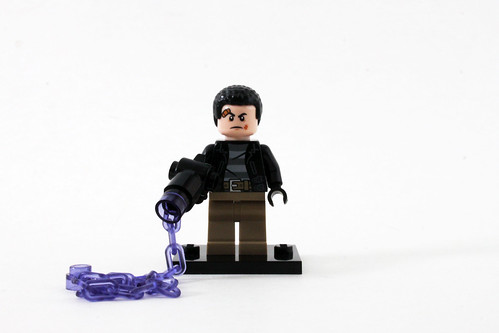 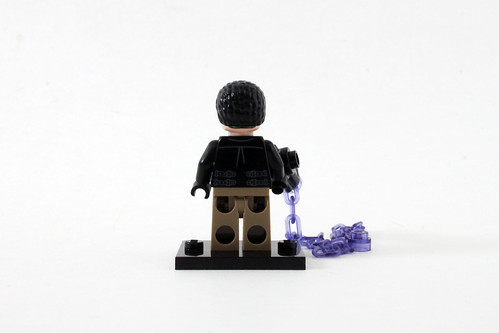 There’s a lime green motorcycle included with this set although I don’t remember seeing it in this particular scene. It isn’t needed but it’s nice for LEGO to include one as a play feature. It would be even better if there was a side car or another bike for the other robber who now has to run back to his base or worse, be caught by Spider-Man. 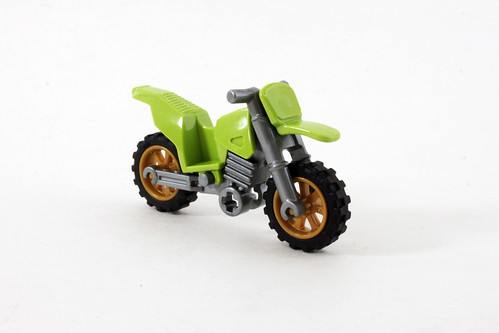 The main part of the build is the bank itself. It is mainly blue with shade of grays throughout and is quite small in size. In the front of the bank, there’s a red fire hydrant on the corner next to the door. The large window has some stickers showing cracks in the middle and on the corners. There’s a play feature here where the window can break off by using the Technic piece on the side of the building. The window section sits on top of some dark tan masonry bricks which look a bit off. Some light or dark bricks would have looked better. Also in the front of the bank is the logo which uses two separate stickers as well as an ATM card sticker. 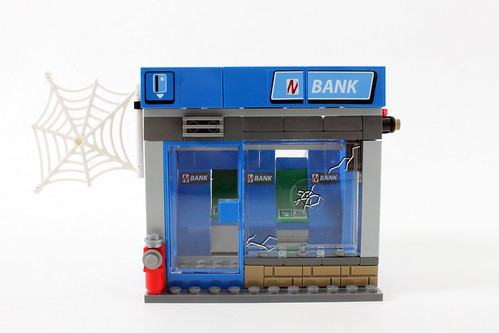 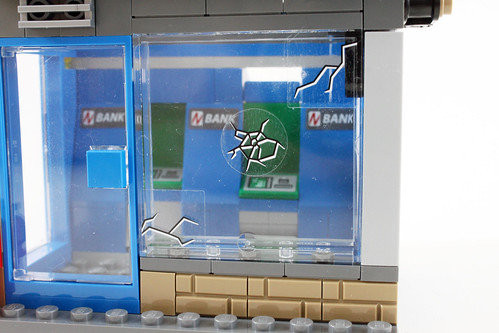 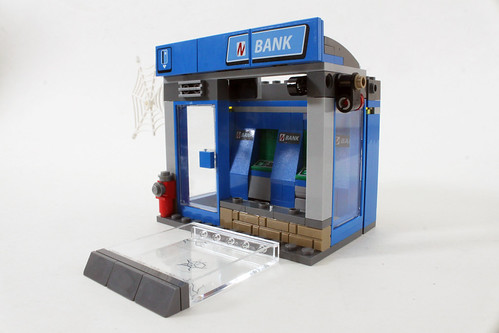 The backside of the bank is able to open up via some hinges. You can see a couple of green ATM machines with some stickers for the panels. There’s also more stickers for N Bank even though they aren’t necessary. The left ATM doesn’t do anything but the right one has a play feature to it. The section sits on a hinge that can push forward using the Technic beam to dump out some printed money tiles. 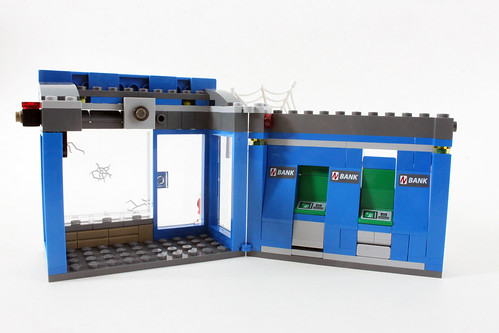 On the back side of the back wall, it looks ugly. The protruding yellow parts with the green from the ATM is somewhat of an eyesore. I wouldn’t have minded if the yellows were blue instead to keep it consistant. For one of the ATMs has a play feature signified by the red Technic beam. Press down on it hard enough and the hinged ATM is able to push forward to let some money fly. The other ATM has a stationary vault filled with more money tiles. 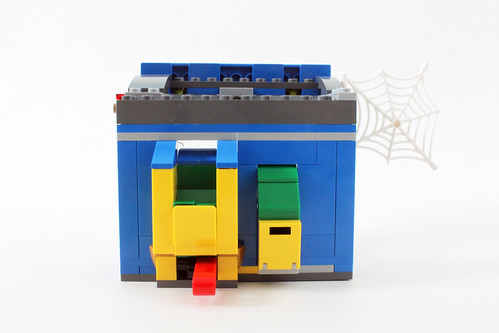 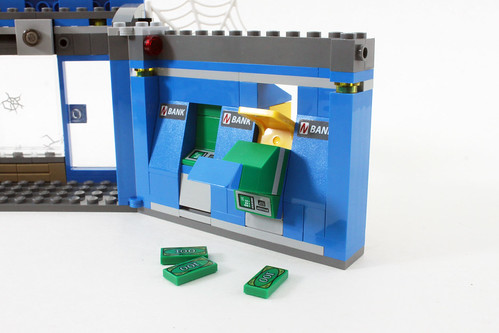 Overall, the LEGO Marvel Super Heroes Spider-Man: Homecoming ATM Heist Battle (76082) is somewhat of a bland set, especially if you’ve seen the movie. It does somewhat recreate the scene but that’s about it. The main draws of the set are the three minifigures, more notably the two masked robbers.

The bank itself is disappointing and I didn’t really like the back of it even though you can’t really see it if you look at it straight on. The play features are okay considering the price of the set but they aren’t anything special. 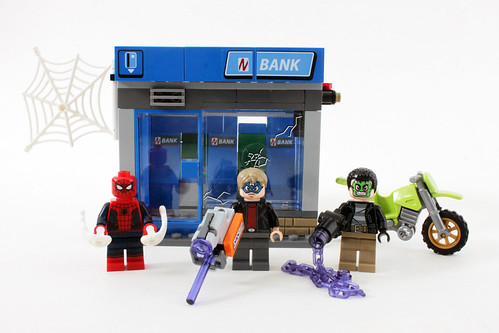