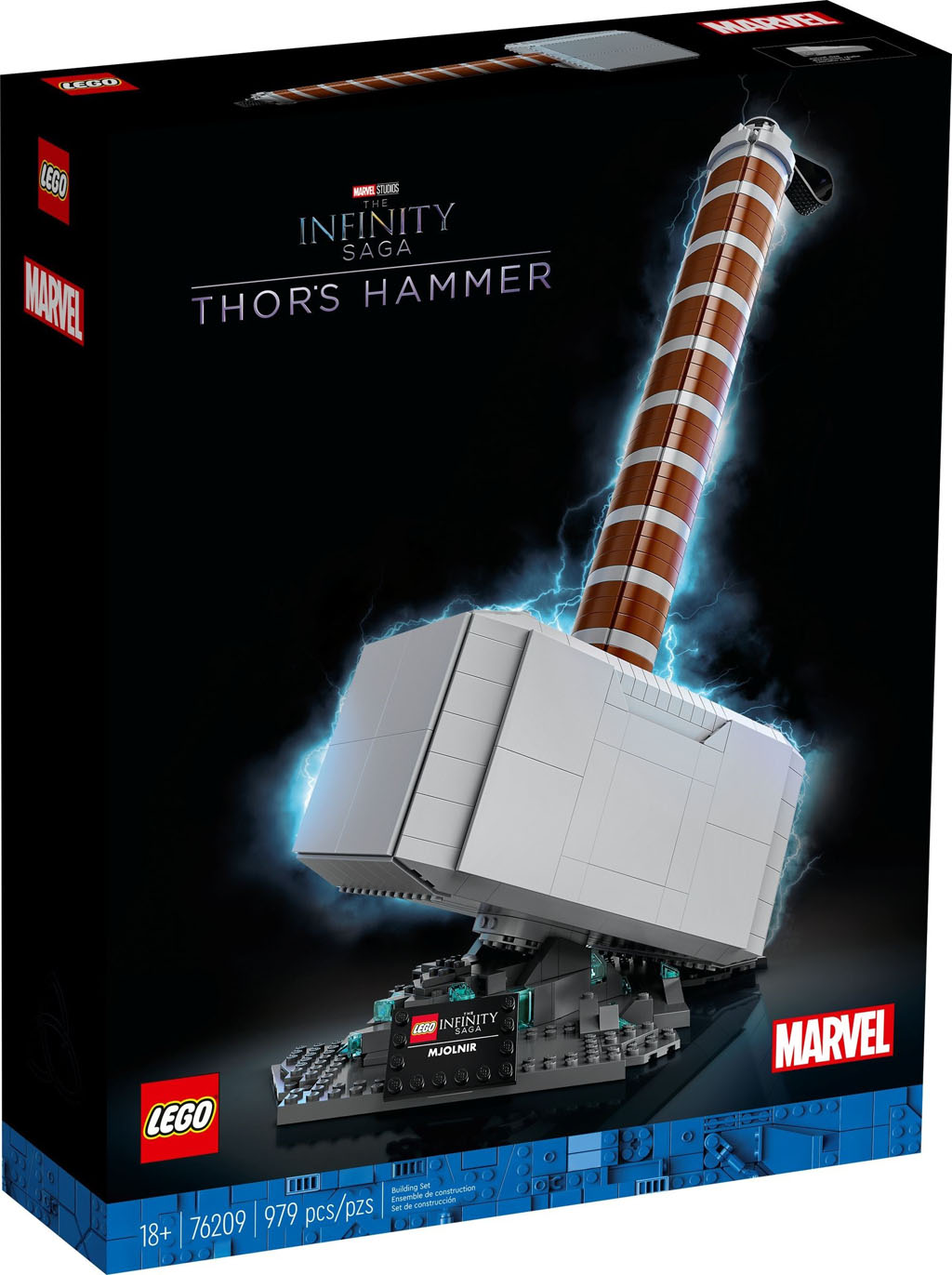 On March 1, LEGO will be releasing a new set in what I call the Marvel Artifacts line with Thor’s Hammer (76209). It is the second Marvel object that LEGO has made into a larger scale joining the Infinity Gauntlet (76191) from last year. The set has 979 pieces and will retail for $99.99. The bags are numbered to five and there are also some other bags for the Technic beams and larger rock pieces. 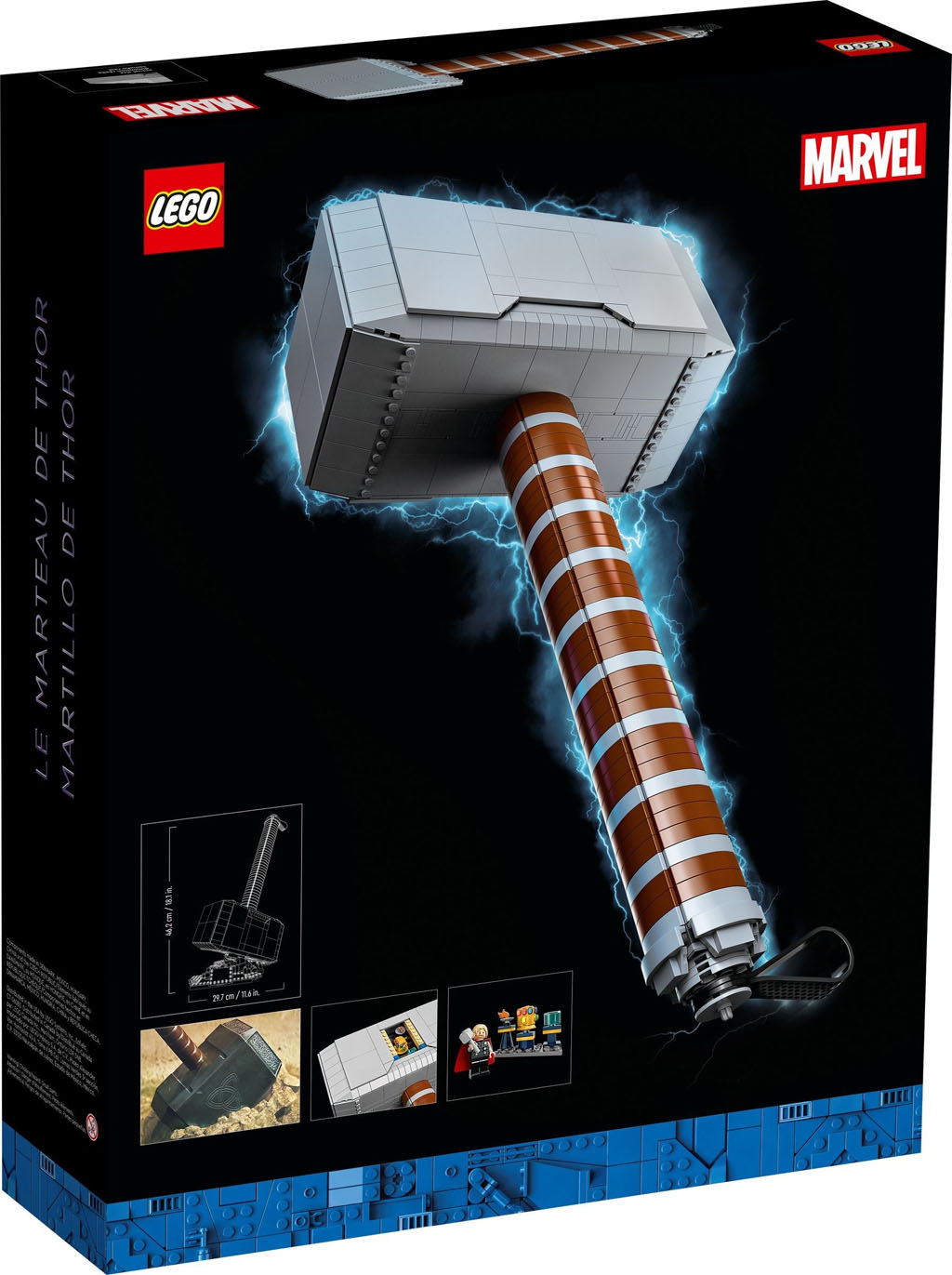 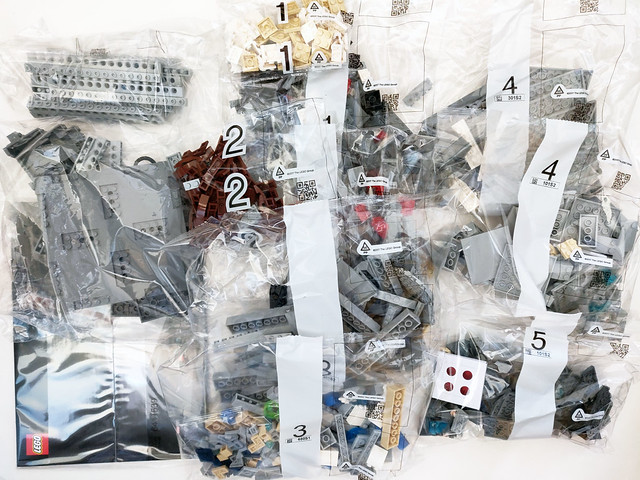 The set does come with a Thor minifigure which I believe is the look for him from the 2011 movie. The torso has a more screen accurate look with the darker tone and the gunmetal detailing. The arms are plain gray but it would’ve been better with some detail on there as well. His double-sided head shows him with a smile on one side and an angry look with electrified eyes on the other. His accessories include a smaller Mjolnir. 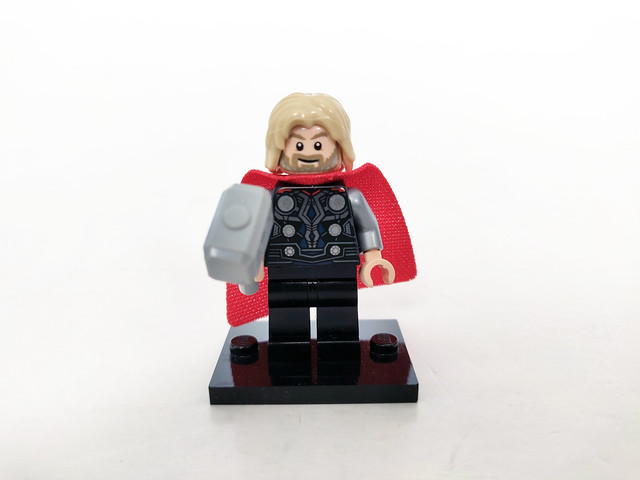 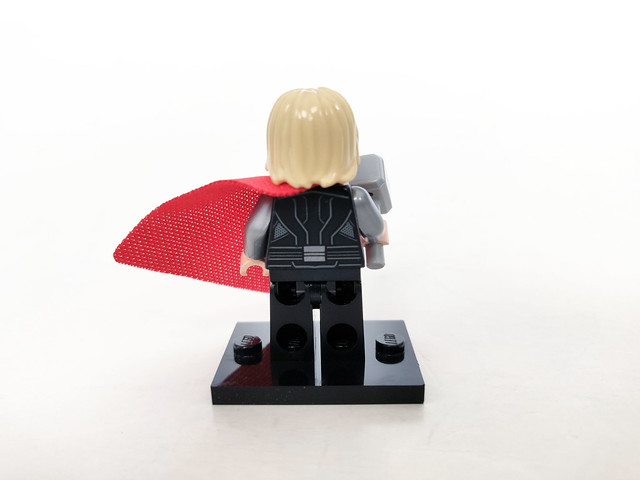 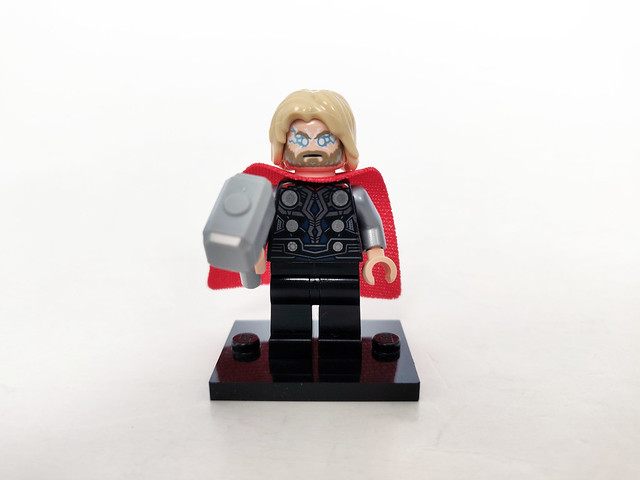 There are two parts for the build, Mjolnir, the artifact table, and the display stand. The build for Mjolnir is as straight-forward as it gets. The first bag allows you to build the handle which is made up of a lot of Technic beams that will eventually give it a lot of sturdiness. One thing I will say with building Mjolnir is that there is a lot of repetitiveness so you’ll be building some segments multiple times. 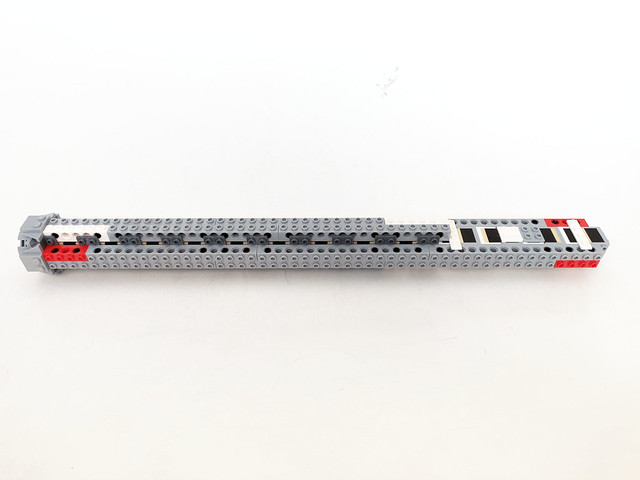 The second bag give a little bit of detail on the handle with the brown slopes that cover the whole thing. The bag also creates the base of the head of Mjolnir. 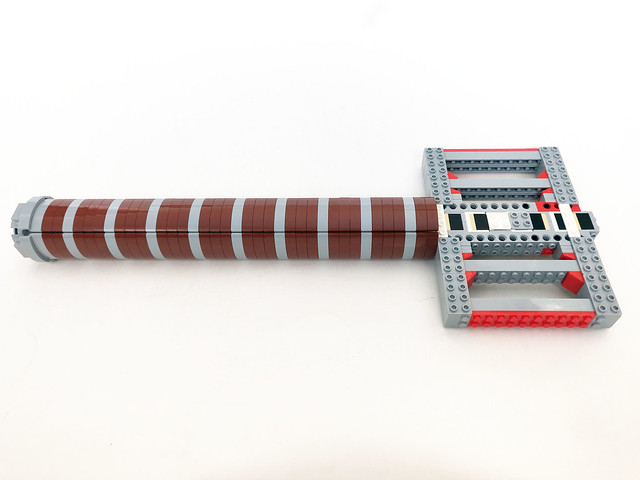 The next bag creates the majority of the head and it uses some gray panels for the outer edges. There are also some slopes that go on the outer edges as well to give it the shape. 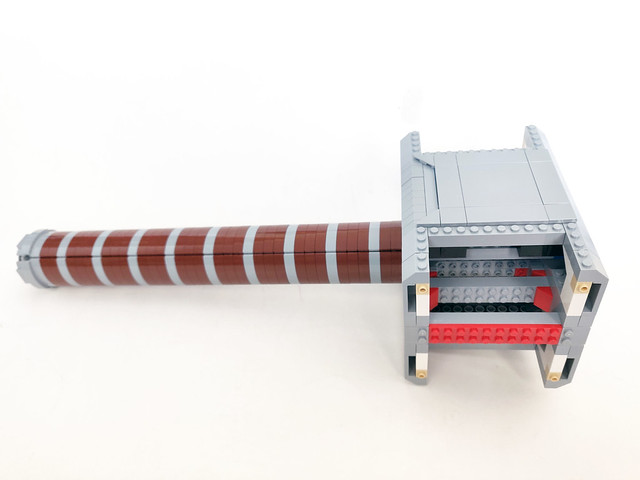 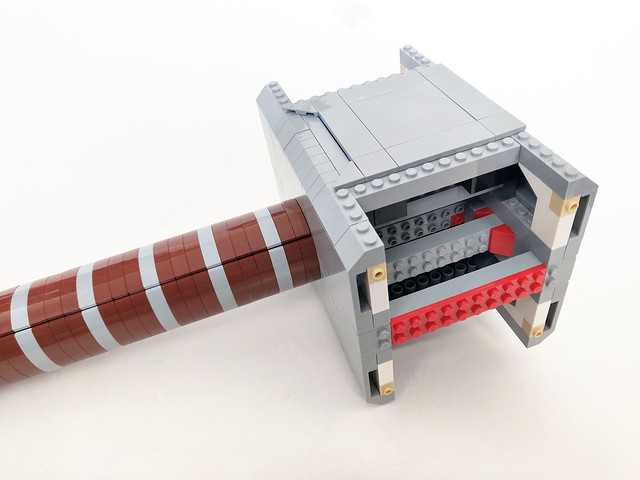 In addition to the bag, there are also parts for the artifact table that is filled with some items from the Avengers movies. On the left, there’s Odin’s Flame, aka the Eternal Flame, which was stolen from Surtur and was used by Hela to resurrect him in Thor: Ragnarok. There is also the Infinity Gauntlet with all six stones and the Tesseract. The table itself can be inserted into Mjolnir for easy storage. 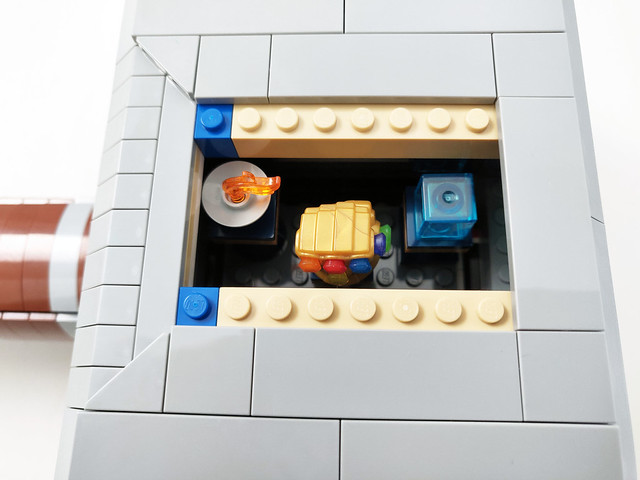 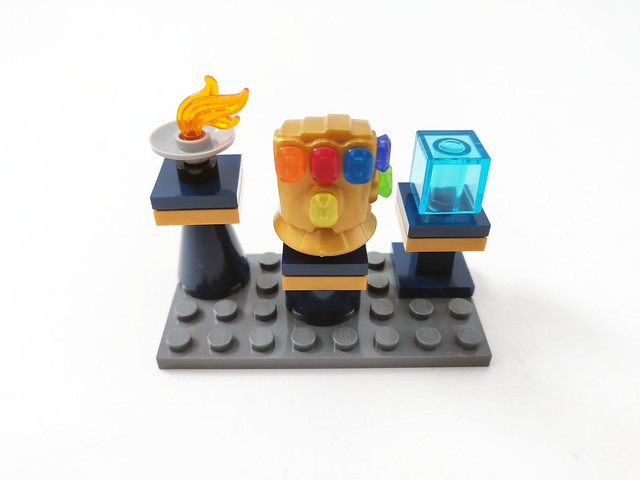 Bag four fills out Mjolnir on the sides by using slopes and large panels. The sides of the head are also covered up with panels. To complete the look, there is a strap that is on the end of the handle. This strap was originally found in three LEGO VIDIYO BeatBox sets. 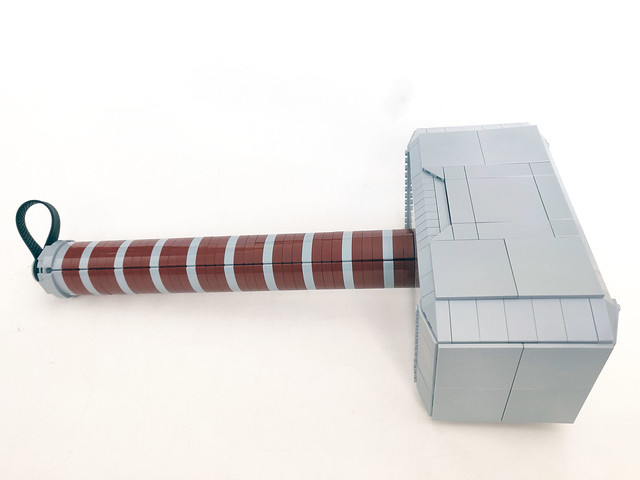 The last bag creates the stand that Mjolnir can sit on. I personally think that is the most interesting part of the build. The main section uses the new LEGO City road plate to connect the smaller sections on the sides. There are some trans-blue slopes and plates to give the stand some color contrast and they look good on it. The larger rock sections are slotted at angles by using turntable pieces. The front of the stand has a printed plate with Mjolnir on it. 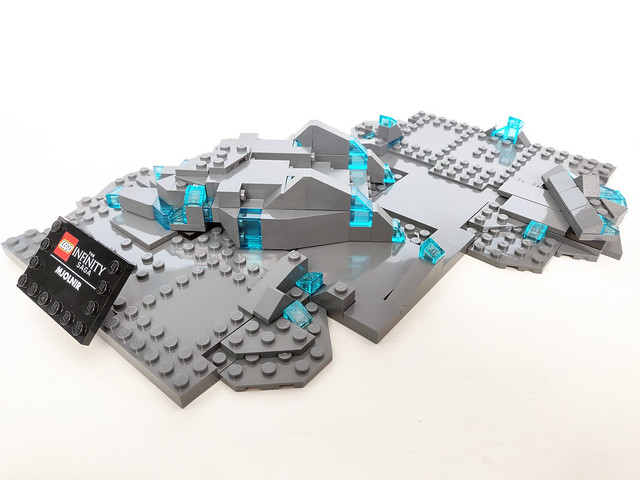 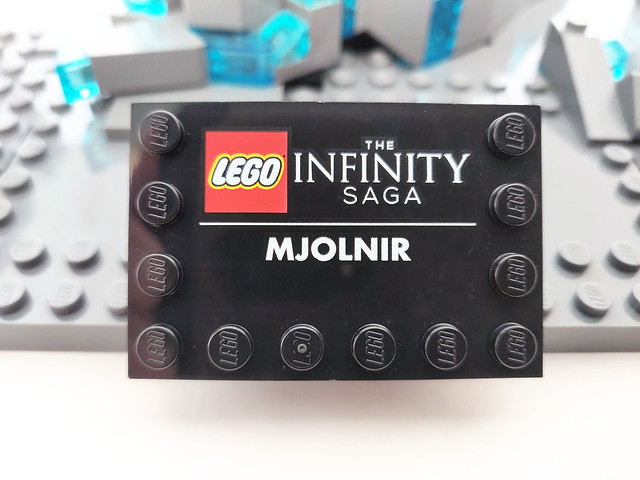 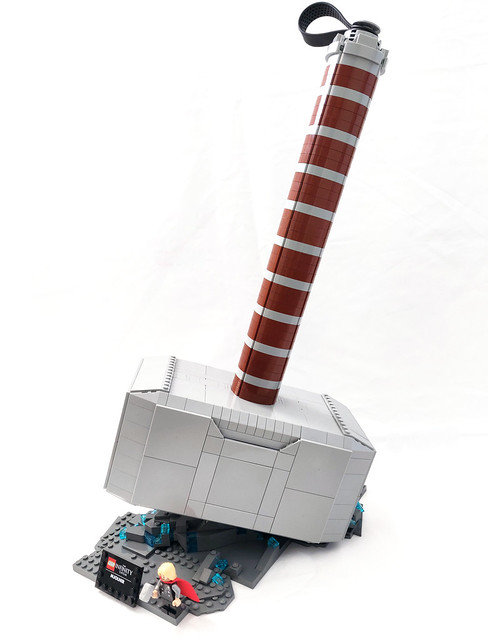 Overall the LEGO Marvel Thor’s Hammer (76209) is a nice looking set that you can’t really tell that it is LEGO from afar but know exactly what it is when you see it. There isn’t much detailing on the hammer itself and here is a time where I would have preferred some stickers to give it more accuracy. Some Uru on the slopes would have been perfect. The build itself is also not too challenging and some parts are pretty repetitive.

I do like the inclusion of the artifact table as all of the items are related to Thor in some way. It’s also nice that you can store it inside however you have to securely put them in or else they will be rattling inside the hammer.

The stand is also a good addition as it gives you a place to prop up Mjolnir without just having it lay there flat. 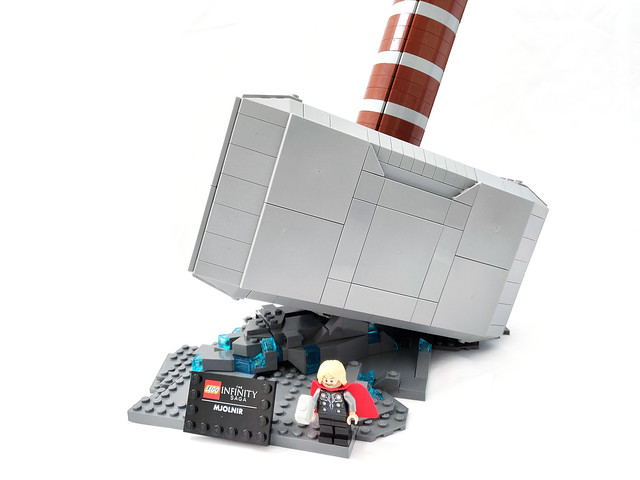