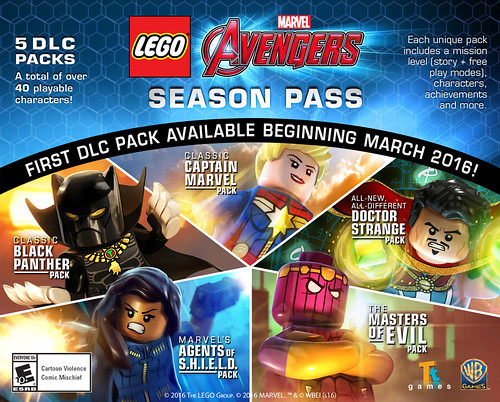 Just a short while ago, Warner Bros. Interactive Entertainment sent out an official press release for the new DLCs that was first reported on yesterday for the LEGO Marvel’s Avengers video game. The first new DLC that will be released is the Classic Captain Marvel Pack which comes out on March 29.

Warner Bros. Interactive Entertainment today announced that the first downloadable content (DLC) for LEGO® Marvel’s Avengers will be the Classic Captain Marvel Character & Level Pack and The Masters of Evil Character & Level Pack, both available on March 29, 2016. These are the first two offerings in the LEGO Marvel’s Avengers Season Pass, which grants players access to a variety of the game’s add-on content packs, including an abundance of well-known Marvel characters, brand new levels and additional story-driven content. Here is the complete breakdown of the Season Pass DLC:

· Baron Zemo and his Masters of Evil are up to no good when they attempt to lure out the Avengers and defeat them in this re-telling of the classic 1963 comic book adventure. This pack features 11 playable characters and one new level.
· Characters included: Baron Zemo, Black Knight (Dane Whitman), Black Knight (Nathan Garrett), Enchantress, Executioner, Iron Man (Classic), Melter, Radioactive Man, Thor (Classic), Valinor, and Whirlwind

· In a re-telling of T’Challa’s origin story, Black Panther and his sister Shuri must evade the chaos of an invasion of their home country Wakanda and save their mother from the clutches of the villainous Klaw. This pack features nine playable characters, one new vehicle, and one new level.
· Characters and vehicle included: Aragorn, Black Knight (Augustine du Lac), Black Panther, Black Panther Skybike, Dora Milaje Warrior, Killmonger, Man-Ape (M’Baku), Shuri, Ulysses Klaw (Classic), and White Wolf

· The team finds itself in a dangerous position after failing to make peace with the enigmatic Inhumans. The Inhumans have now occupied the S.H.I.E.L.D. Helicarrier and it’s up to the Agents of S.H.I.E.L.D. to neutralize the threat and uncover the secrets of Afterlife. This pack features 13 playable characters, one new vehicle, and one new level.
· Characters and vehicle included: Agent Daisy Johnson, Agent Leo Fitz, Agent Koenig, Agent Melinda May, Agent Bobbi Morse, Agent Jemma Simmons, Cal Johnson/Mr. Hyde, Deathlok, Gordon, Grant Ward, Jiaying, Lincoln, Raina, and The Bus

As an added bonus, Season Pass holders will also now have free access to three additional Character Packs, including: