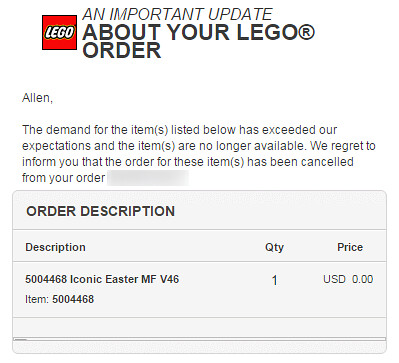 For some reason, the recently released LEGO Seasonal Iconic Easter (5004468) has been rather popular among LEGO fans. If you followed my post this past weekend, [email protected] North America had an unannounced promotion for the Chicken Suit Guy Minifigure for only a few hours while supplies lasted. Those who placed an order for it during that short period of time would have potentially gotten one as it was a nice incentive to make a purchase. That’s until the last couple of days when people, including me, started getting emails that the Iconic Easter Minifigure has exceeded LEGO’s expectations and were no long available and thus being cancelled from the order.

I have a feeling that this piece of news may upset a lot of people who were affected and were looking forward to getting the set. If you’re still looking for it, your local Toys R Us store might still have them in stock. The last time I checked at my store, they were up at guest services behind the counter but that may vary with your store. The item number is #648866.

Were any of you affected because of the cancellation?