Dorling Kindersley’s newest LEGO book has been released and it is called LEGO Minifigure Year By Year: A Visual History. The hardcover book features more than 2,000 images of various minifigures through LEGO’s history. The book also includes three different minifigures which is unique because we usually just get one in a DK LEGO book. It retails for $24.00 on Amazon

and has 256 pages. If you want to do a cost per page ratio, it is $0.09/page. The book is written by Gregory Farshtey and Daniel Lipkowitz, author of many other great LEGO books 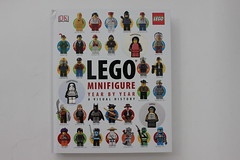 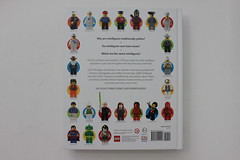 As stated before, the book includes three minifigures: a Townsperson, a Stormtrooper, and a Robber. The Townsperson has a solid red torso and legs. It has your classic yellow head with two eyes and a simply smile and brown hair. The Townsperson minifigure has a very retro look it. 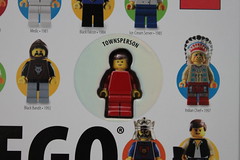 The Stormtrooper minifigure is the usual Stormtrooper that you can get in many LEGO Star Wars sets. Nothing too special about him except that you can add to your army of Troopers. Also, there is no weapon included with it. 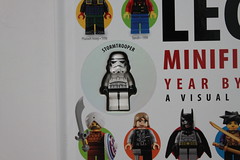 The Robber minifigure is the same one in a couple of the LEGO City Forest sets including the Forest Police Station (4440) and Police Pursuit (4437). He wears a tattered grey and white striped shirt with brown pants. He has an angry expression with a Franz Josef beard style. The Robber also wears a grey knit cap. 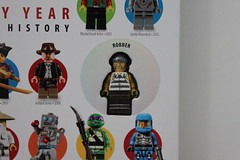 The cover of the LEGO Minifigure book is hardback shows 28 various printed minifigures from different years starting from 1979 and ending in 2013. The cover also has three windows for the three included minifigures. The back of the cover shows 23 more minifigures throughout the years and also gives a short description of what the book is about.

The book starts off with the table of contents which shows the introduction of the minifigures and five subsequent chapters that are divided into decades starting from the 1970’s up to the 2010’s. 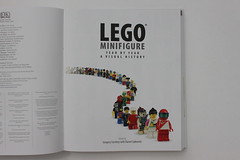 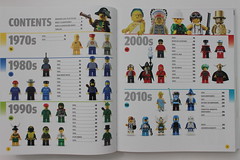 The first two pages called “Bringing LEGO Play To Life” talks about the birth of the first minifigure, designed by Jens Nygard Knudsen, and it’s evolution to what we see today in LEGO sets. It took Knudsen and his team three long years and 50 prototypes to achieve the modern styled minifigure.

The next two pages called “What’s A Minifigure” describes what a minifigure actually is and it’s details. Did you know that a standard minifigure is four LEGO bricks high? This section also talks about what LEGO calls the “non-minifigures” which are figures that don’t have any standard parts to be counted as a true minifigure such as the LEGO Fabuland and DUPLO figures. They are listed in grey boxes throughout the book.

Continuing on to the next two pages named “How Is A Minifigure Made”, the book goes into detail on how a minifigure is created and the different stages it goes through including brainstorming, designing, and manufacturing. An interesting note I learned here is that a particular minifigure can take more than than a year to go from an idea to the finished product.

The final four pages of the introduction is a 35-year timeline, 39 years if you count the very first LEGO minifigures, of the different minifigures that the company has starting from 1974 and ending in 2013. There are also fun facts under each year of when something new was introduced such as particular minifigures, accessories, and other various elements. 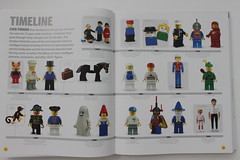 LEGO Minifigure then dives into every single year, separated by decades, of all the various minifigures that were released that year. Each minifigure photographed has facts about them and what makes them unique. Each year, up to 1994, gets two pages each to describe the minifigures including the “non-minifigures”. In 1994, the pages are expanded to four each and are increased as we reach the present.

Each decade also has a few pages of random topics such as minifigure hats, hairs, head molds, and even a section for some of the rare minifigures in the LEGO universe. 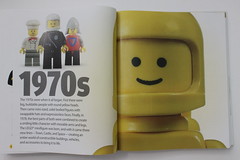 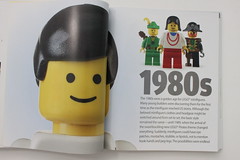 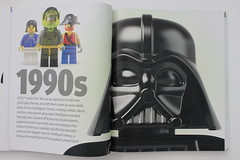 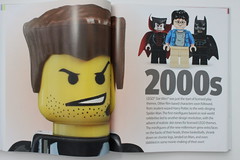 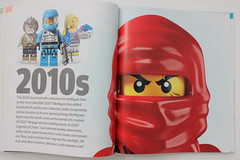 The back of the book is a page that acknowledges everyone who helped with the production of LEGO Minifigure Year By Year: A Visual History including Huw Millington of Brickset and Adam White from Brick Fanatics, just to name a few. Late last year, Huw asked the LEGO community to send in minifigures from their personal collections to DK to be photographed for the book. Many people took on the offer and their minifigures are included. If you sent in one, try to see if you can find yours!

LEGO Minifigure Year By Year: A Visual History is got to be one of the best LEGO books I own, and I own quite a few. The amount of small details that is in the book about the minifigures is phenomenal. If you’re a fan of books by Dorling Kindersley, I would totally recommending picking up this book to add to your collection. I’ve already finished reading it but this is one of those books that you would want to go back to over and over mainly because of all the little facts you can learn about the minifigures. Again, the book is now shipping from Amazon