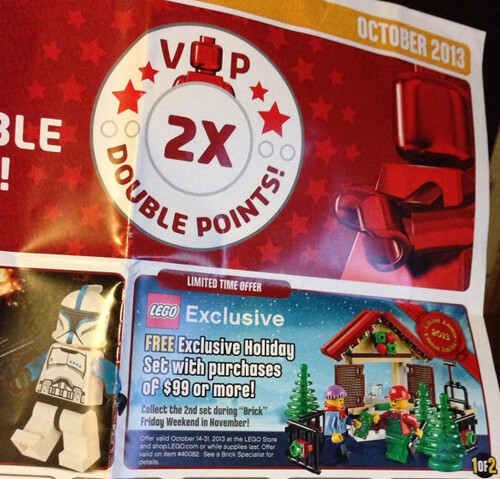 First, October is Double VIP Points. Yes, it’s back! For every dollar spent, you will be able to earn double the amount of VIP points for every purchase. Not a shabby deal if you’re waiting to purchase some of the larger sets.

Next up are the 2013 Holiday sets. They will be similar to the 2011 versions of 3300020 and 3300002. From October 14-31, you will be able to get the first part of the set with purchases of $99 or more. You will be able to complete the set with the second part during Black Friday weekend on November 29 – December 2nd. The Brick Owl has posted the parts list for set 40082 which is the Christmas tree lot seen above and 2 minifigures and 40083 which looks like some sort of vehicle with a driver.

October also continues with the Clone Trooper Lieutenant (5001709) polybag minifigure. You will be able to get it if you spend $50 or more on LEGO Star Wars sets. Why not combine all the deals and spend $99 or more on Star Wars sets and get Double VIP points, the 40082 Holiday set, and the Clone Trooper Lieutenant. It’s now time to plan out your shopping strategies for the holidays. Get to it!