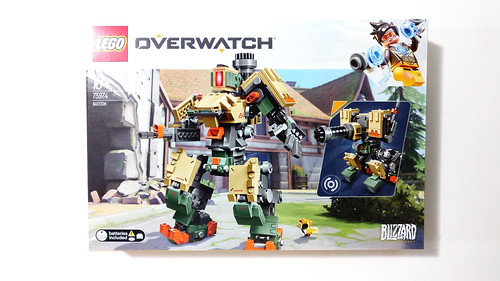 Way back in October, I reviewed the Blizzard exclusive LEGO Overwatch Omnic Bastion (75987). That one was only a miniature version of the unit but the new 75974 version is a large scale model that provides a lot more detail. It has 602 pieces and retails for $49.99 and it is the second largest set in the initial wave of LEGO Overwatch sets. The contents of the box include four numbered bags, the instruction booklet, and a small sticker sheet. 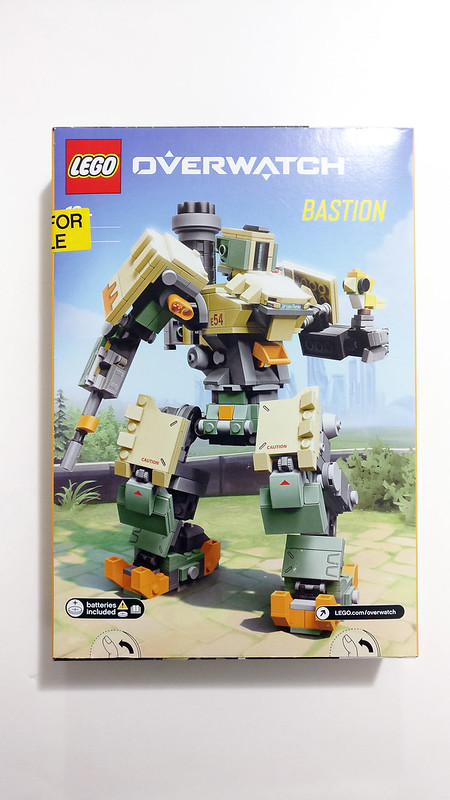 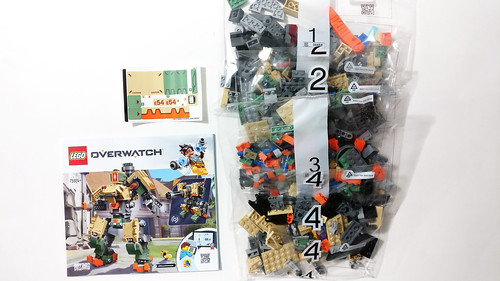 Since there is no minifigure in this set, let’s just hop straight to the build. It starts off at the lower torso where there are four click joints, two on each side. 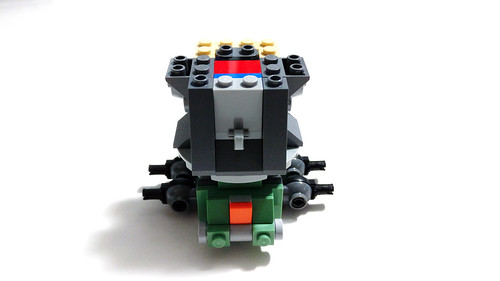 The next is the upper torso where it situated on a ball joint so it is able to turn a full 360 degrees. Also here are the arms which also use click joints. The head uses a red light-up brick which looks good through the small trans-light blue plate on the front. When lighted up, this puts Bastion into attack mode. The front chestplate going on finishes off Bag 1. 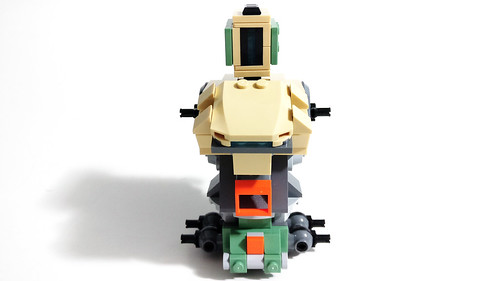 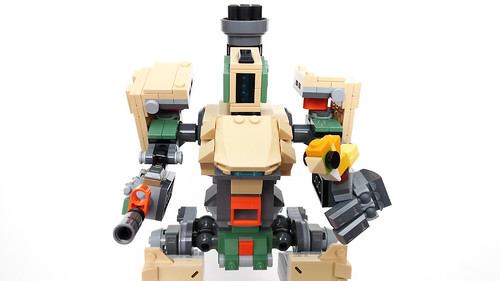 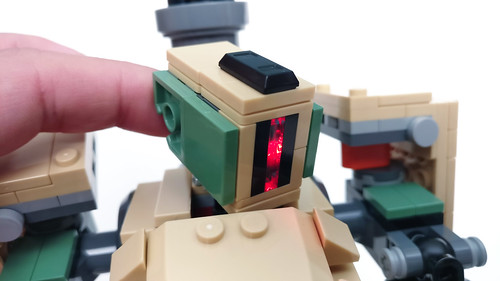 Bag 2 is used to build Bastion’s robotic legs. The legs have no knee joints but has a chicken walker style with the rear-facing knees. There are a couple of caution stickers on the tan plates on the thighs which gives him some exterior coverings alongside the sand-green flaps. 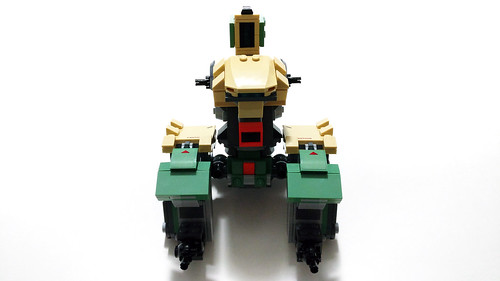 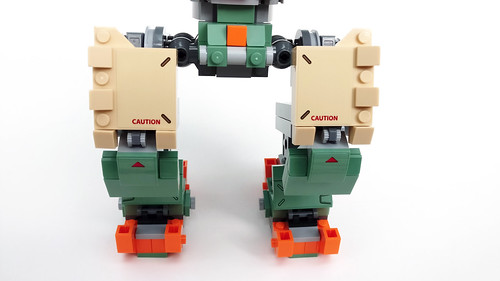 The next bag is used mostly for Bastion’s feet. The color combination of orange and sand-green looks perfect and a good contrast to the tan and gray of the rest of him. The rest of the parts for this bag are for the gatling gun turret which attaches to the back. There’s also a printed 1×1 round tile of the Overwatch symbol that goes next to the turret. 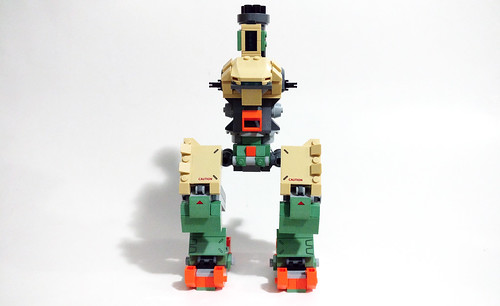 The last bag is mostly for Bastion’s arms. The left arm consists of a regular arm that has some fingers on ball joints. The thumb is a 1×2 jumper plate that will be used later on. The right arm is for his recon submachine gun. Both arms have ball joints at the elbows for additional articulation. Some tan armor plating goes on the shoulders to complete the look of Bastion. 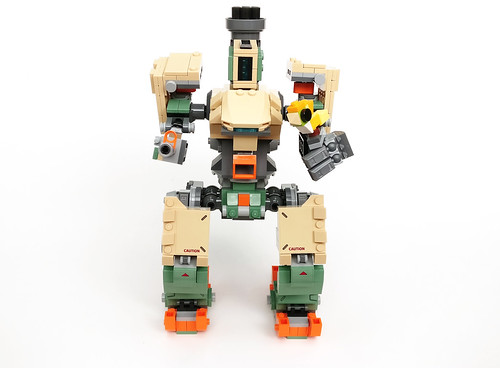 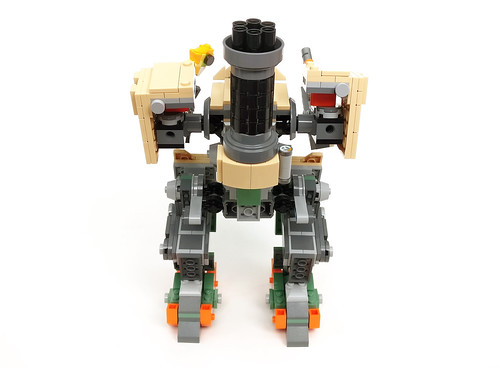 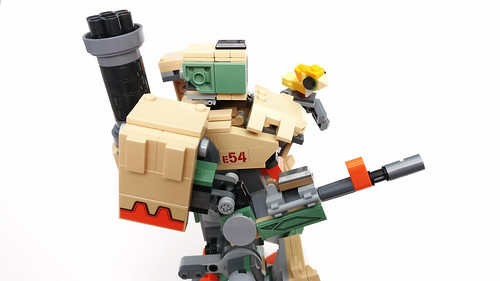 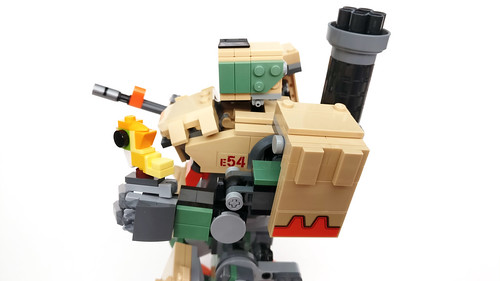 The final part of the whole build is Bastion’s bird companion Ganymede. Like with Bastion, Ganymede is also in its classic skin which is mostly yellow with some shades of green and orange. It fits nicely on Bastion’s jumper plate thumb. 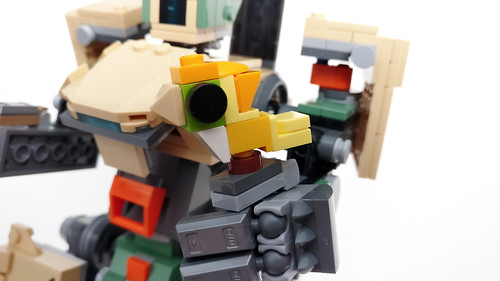 Unlike the smaller Omnic Bastion set, this larger version is able to transform from Recon mode to Sentry mode. There are only a few easy steps to get Bastion into turret mode.

1. Fold up the sand-green flaps at the knees.
2. Flip down the flaps at the front of the feet.
3. Push him forward at the feet so he’s leaning forward.
4. At the ratchet joints near the hip, push down on the lever until he goes down.
5. Swivel the upper torso 180 degrees.
6. Pull down the turret.
7. Pull off Bastion’s head.
8. Readjust the shoulder armor and flip the turret 180 degrees. 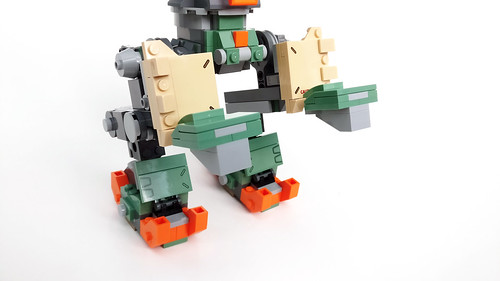 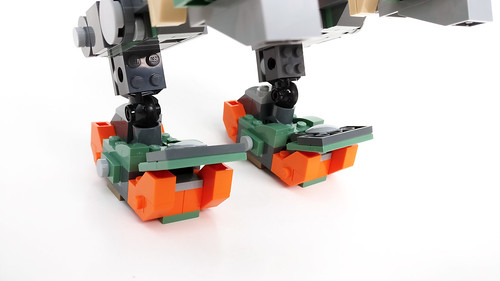 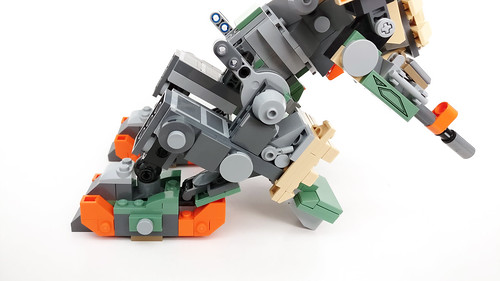 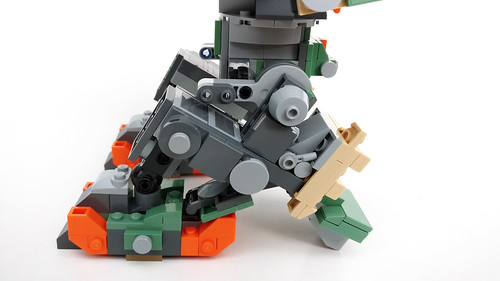 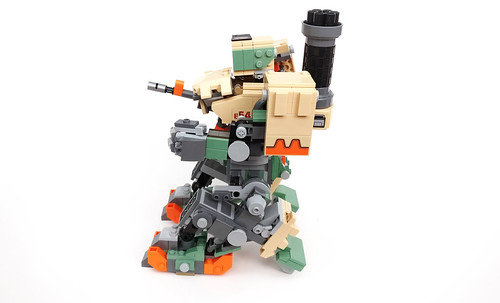 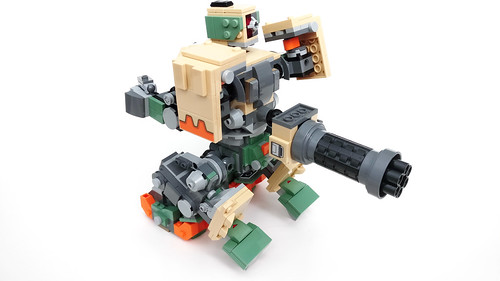 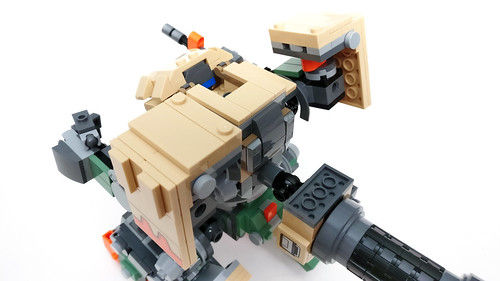 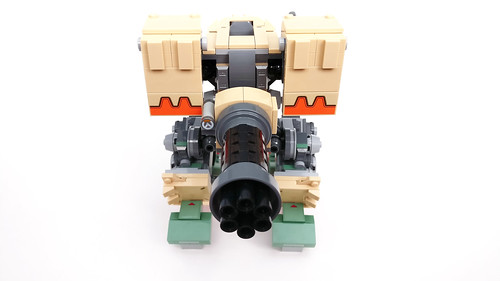 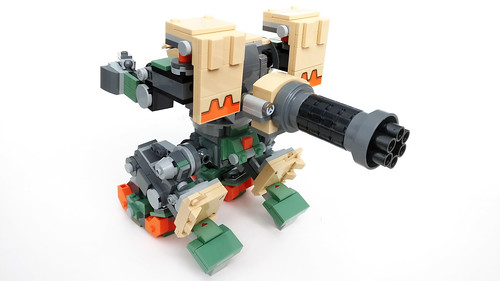 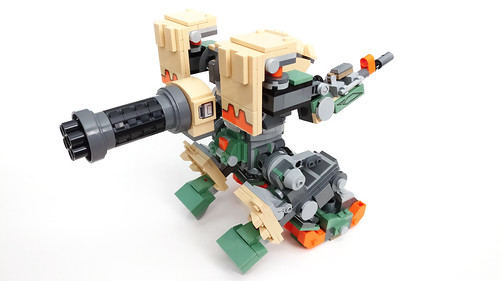 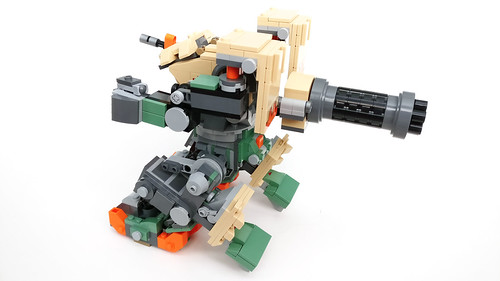 Overall the LEGO Overwatch Bastion (75974) is a fun build and it results in a great display piece. At only 602 pieces, it is larger than I expected and it even threw in some pieces for his companion Ganymede.

I will say there is some repetitiveness while building the legs since they are basically the same. The stickers were necessary to give Bastion the detailing although I wish they were printed pieces. Another thing that I would have like to see was a Bastion minifigure since this is the only set in the wave, besides the Omnic Bastion, that doesn’t come with one.

I will say that this set is worth picking up but if you’re an Overwatch fan, you’ll probably be getting it anyways. 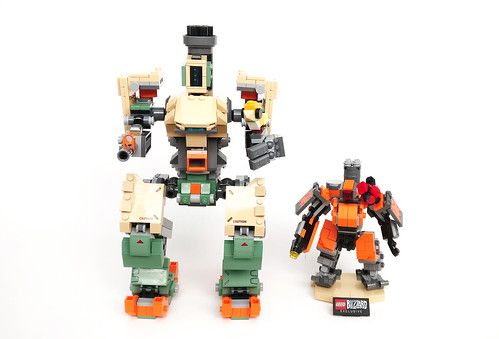