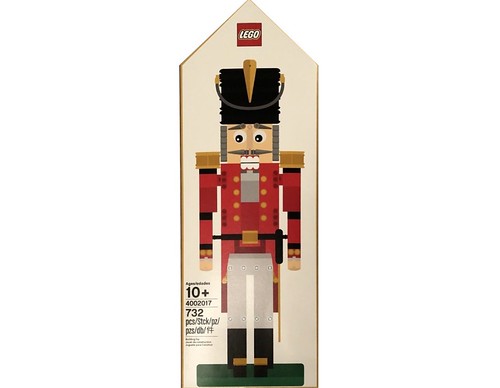 Every year if you’re a LEGO employee, whether at The LEGO Group or LEGO Brand Stores, the company gives an exclusive set as a holiday gift. For 2017 being the 40th anniversary of the LEGO Technic theme, this year’s Nutcracker Employee Gift (4002017) has a feature that incorporates that into the build. According to the building instructions, there’s a lever on the back of the Nutcracker to make the arms and mouth move however, it most likely will not be able to crack actual nuts.

If you’re looking to pick up one, there are plenty of sets that are listed on eBay at not so cheap prices. I would suggest waiting a year or two for the prices to drop down just a little but expect to still shell out at least $150 on it.

I know this set has been shown off on social media but I wanted to wait a little longer to post it because some employees, who may be readers, may not have received their sets yet and I didn’t want to spoil the surprise for them.

Putting the Nutcracker together was super fun ?? #Being a kid #Making it count #living it up ??