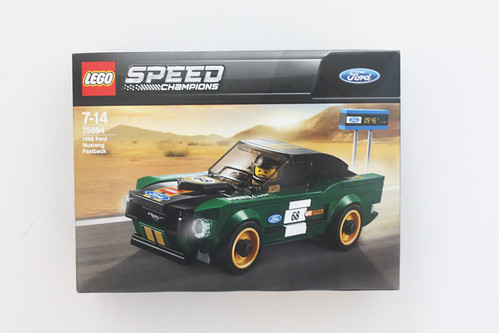 The new LEGO Speed Champions sets will be available starting in March and one of the new ones that I was very looking forward to building was the 1968 Ford Mustang Fastback (75884). It is one of the two Ford that will be releasing in this wave. I don’t have the piece count because this is the European version of the set and it will probably retail for $14.99. 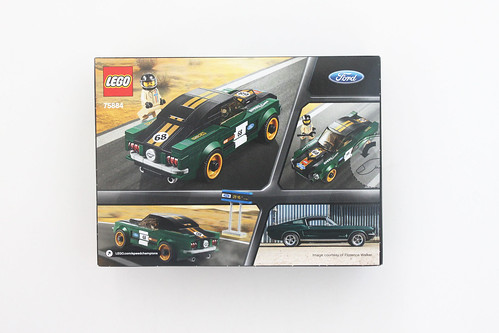 The contents of the box include three unnumbered bags, the chassis, a sticker sheet, and the instructions. The sticker sheet contains only 13 stickers which is one of the sets with the fewest stickers. 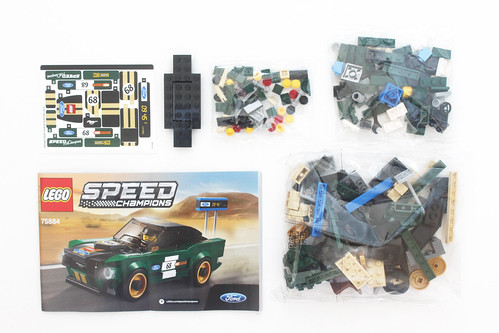 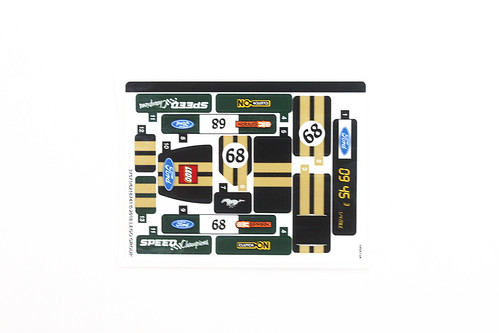 The driver wears a tan racing suit that is the same one that was used in the 2016 Ford GT & 1966 Ford GT40 (75881). It features a small Ford insignia on the front with some red and blue stripes while the back has a larger Ford insignia along with the stripes. The color of the legs match up to the torso. His head shows him with a beard and a smiling expression and he has a black helmet. His accessory is a black wrench. 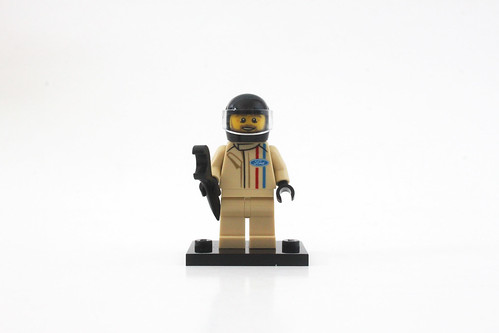 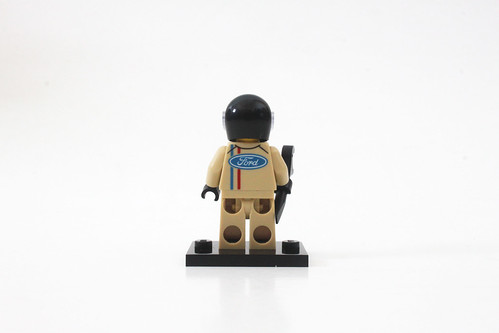 The first part of the build is the Ford branded timing board. It’s basically a sticker that goes on the 1×6 black brick and everything connects to the two gray columns. 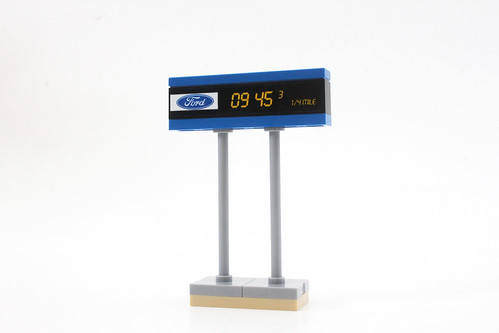 The build of the Mustang Fastback is straightforward with not too many advanced building techniques. The main color scheme of the car is dark green with black going from the hood to the roof and the trunk. There’s also some white on the door for the racing number sticker. 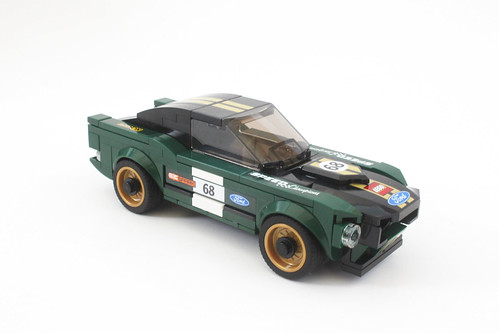 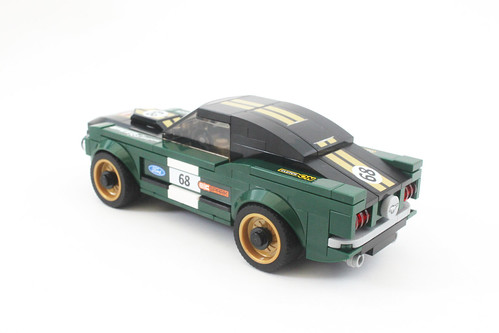 The front of the car has a sticker of the Mustang on the 1×2 slope piece. There’s also some more stickers on the hood for the Food insignia along with a LEGO sponsorship. I do like the use of a black Nexo Knights shield with a 68 sticker. 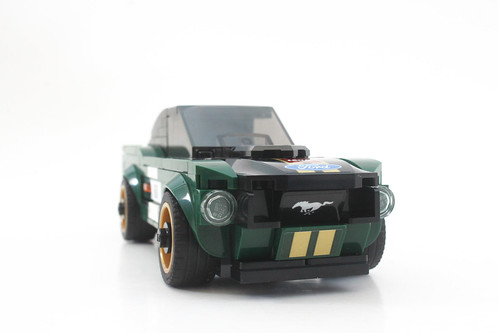 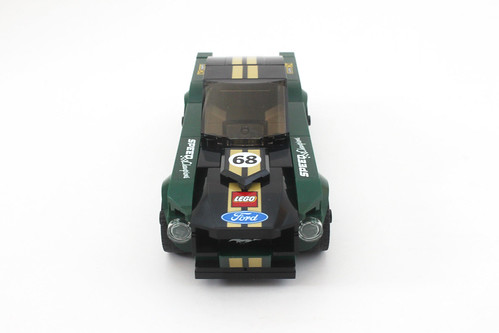 On the doors, there’s a long sticker that goes on 1×6 brick which has the 68 on the white flanked by the Ford and another sponsorship. The Fastback actually looks pretty good from the side especially with the pearl-gold rims. 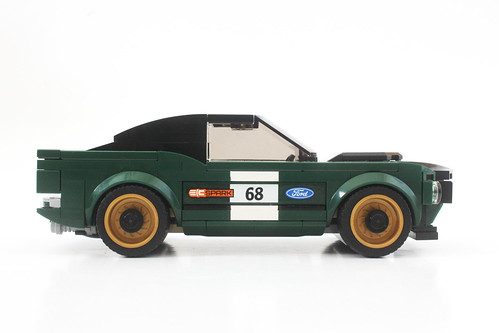 The roof of the car has some yellow racing stripes that go to the trunk. There’s a printed 1×1 round tile of the Mustang for the trunk lock. For the dual exhausts, there are some lightsaber hilts used for it. 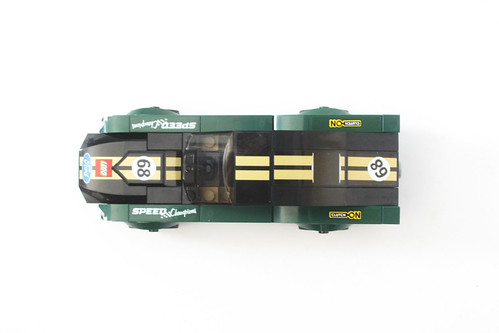 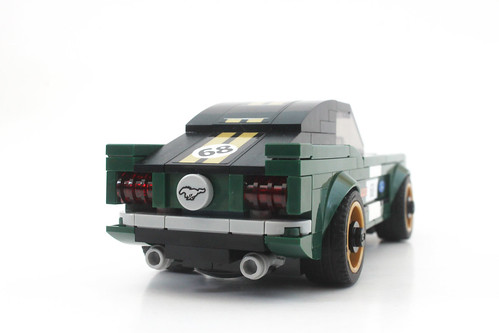 For a majority of the LEGO Speed Champions sets, stickers are used to enhance the detailing of the vehicles but there are some that do not need them and I feel that the 1968 Ford Mustang Fastback (75884) is one of those vehicles as you can see below. I have a feeling that a lot of fans will want to keep it pure and free of stickers. If there is a sticker that you probably want to add is the Mustang in the front of the car. If you do decide to add all the stickers, the car doesn’t look too bad as this is one of the cars that isn’t overwhemled with them. 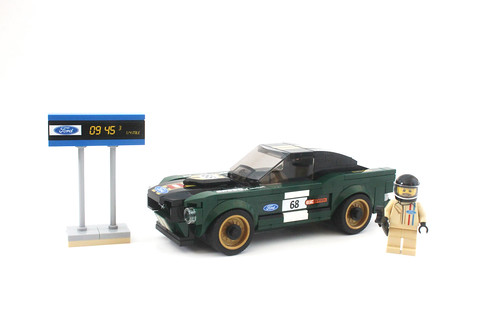 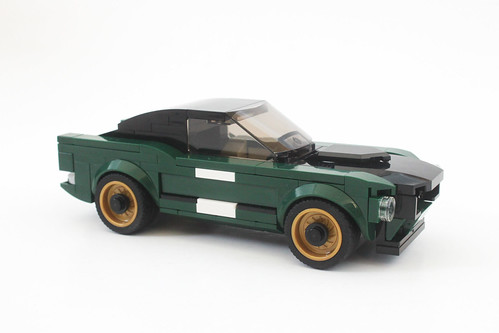 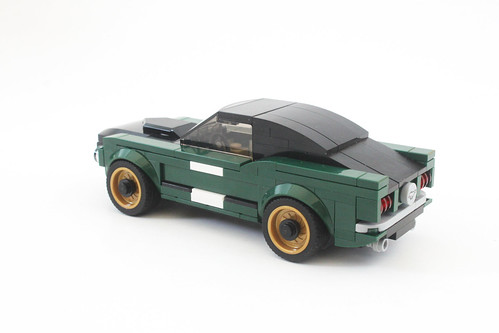 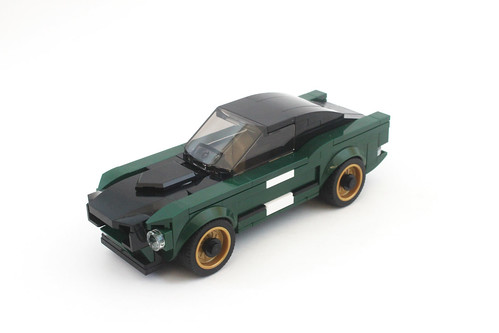