Just2Good continues to make LEGO fans happy by revealing images of the 2015 LEGO sets. In this latest video, he has shown us the new LEGO Speed Champions sets that will be coming out in 2015. It looks like LEGO has teamed up with some top Supercar manufacturers such as Ferrari, McLaren (Mercedes), and Porsche to produce some pretty cool looking vehicles. Note that each set also includes at least one minifigure that has printed emblems of the respective cars on their torso.

Last year, we reported that LEGO may be coming out with some sets based on the popular TV show, Top Gear. Although, these new sets doesn’t have the Top Gear label, there are a few vehicles that the hosts have driven before on the show.

There are no images of the box art for the 2015 LEGO Speed Champions sets at this time but we’ll have them up once they are available. 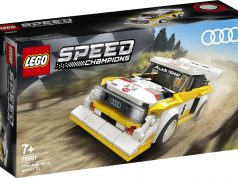