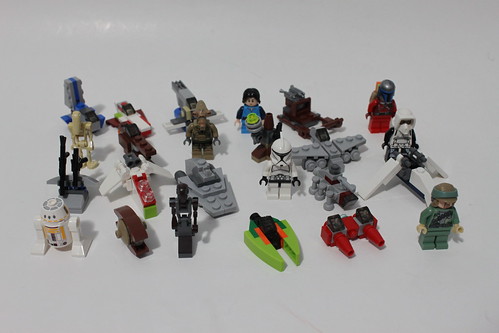 Yesterday we finally completed the LEGO Star Wars 2013 Advent Calendar (75023) with Jango Fett being this year’s Santa. Like with other many other LEGO sets, there are hits and misses with the Advent Calendar.

There are a couple of builds and minifigures that I liked in the calendar such as the Republic Assault Ship, the AT-TE/Republic Dropship combo, Jedi Starfighter, and Jango’s Slave I. There are also quite a few army-builder minifigures including some fairly rare ones in the redesigned Scout Trooper and the Rebel Commando. Plus you can’t forget the return of young Boba Fett and Santa Jango Fett.

There weren’t that many things I didn’t like for this year but some little things get repetitive with the calendars. One of those things is the weapons racks. I feel the weapons should be included with the minifigures and those certain days could be used for other builds. Also those Battle Droids keep sneaking in the calendars. They may be great for others but they aren’t really for me.

After comparing this year’s calendar to previous years, in my opinion, it is better than last year but a notch lower than the 2011 version. In number of pieces, the 2013 version has 254 pieces which is right in between the previous years. You may able to find them discounted in stores in the near future if you want to get one.