The 2012 Star Wars Advent Calendar (9509) is now completed and there is a mixed reaction on this set. There are a few hits and a few misses as well with the calendar. With less pieces used than 2011 calendar, will this set hold up to the last year’s model?

There are a few vehicles that I thought were hits including the Star Destroyer from Day 4 and the Naboo Starfighter from Day 7. For the minifigures, I thought that the Snowman R2-D2 on Day 23 and the Santa Darth Maul in the final day were the best overall minifigures in the set.

There are also misses with the 2012 Advent Calendar such as the MTT from Day 5 and the Separatist Shuttle in Day 19. I just didn’t think that LEGO captured the representation of the vehicles that well. All the minifigure were decent except for the obligatory addition of the Security Battle Droid from Day 6.

Overall, the 2012 Star Wars Advent Calendar is a decent set. It comes in at 236 pieces, much less than the amount of 266 pieces the 2011 version had so the quality isn’t as up to par as last year. The set retails for $49.99 but it’s been on sale for a while now. Look for it to be on discount in stores now that Christmas has passed. Now is time to wait for next year’s advent calendar. 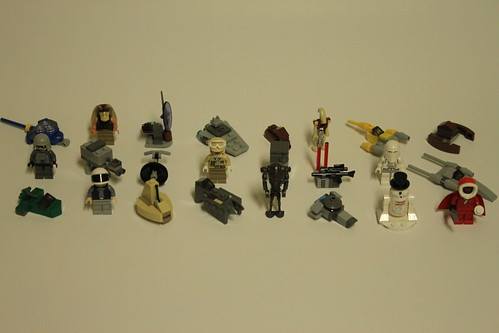