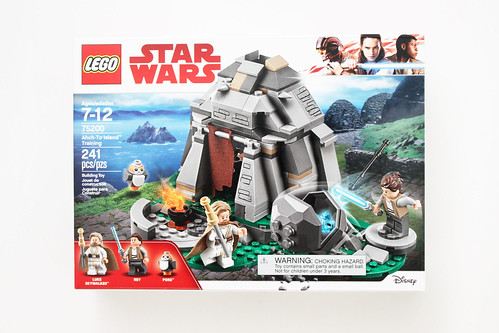 The new 2018 LEGO Star Wars sets are now available and one of the sets that I was looking forward to getting was the Ahch-To Island Training (75200). The set consists of 241 pieces and retails for $29.99 which is typical for these small-to-medium sized licensed sets. There will be some minor spoilers as the movie has been out for a while now. 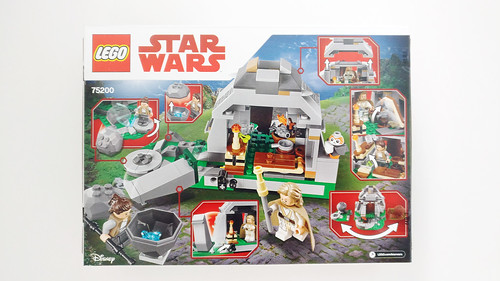 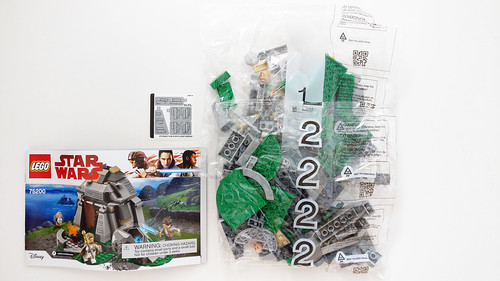 There are two minifigures that are in this scene, Luke and Rey. Luke Skywalker made a very short appearance at the end of Star Wars: The Force Awakens and fans were disappointed that there was no Luke minifigure that was in that wave of LEGO sets. However in Star Wars: The Last Jedi, he has a more promient role and we finally get a minifigure for his older version and I feel that the main draw of this set mainly the Luke Skywalker minifigure. This version of him shows him wearing a white Jedi robe with some tan accents on the front and back. The cape is made from the softer fabric and it seems that it a bit larger than other capes. One nice little detail with the minifigure is the dark gray hand to represent Luke’s cybernetic hand. He has a double-sided head with a normal face on one side and an angry look on the other. There’s some new printing on the head showing a beard with the thicker part at the chin. The hair piece is also new but the tan color doesn’t match up with what was seen in the movie. His accessory is a staff that uses a bar and a tan telescope. 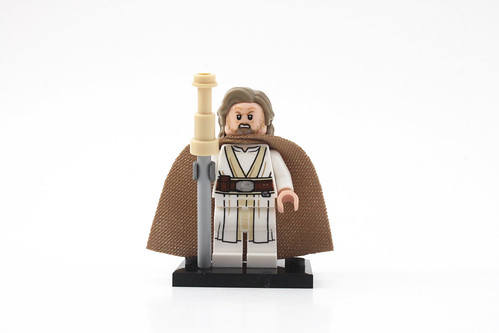 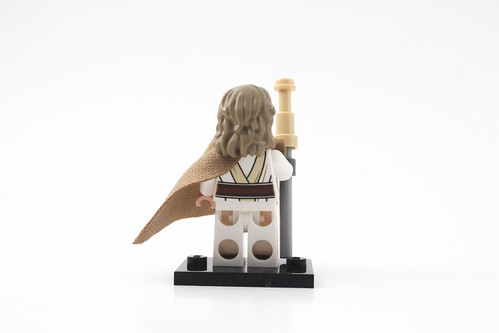 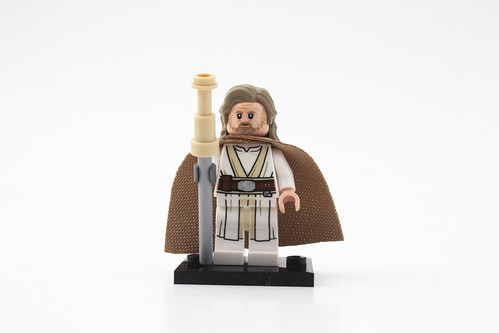 Rey has on the outfit that we saw at the end of The Force Awakens. There’s printing of a dark tan vest with a lighter colored shirt underneath. The legs are dark gray with some detailing of the pads and belt. Her head is the same one that we’ve gotten before in previous sets. The expressions on it include a frowning and smiling expressions. Her hair piece is also not new with some buns incorporated into a ponytail. Her accessories include a black staff and Luke’s old lightsaber. 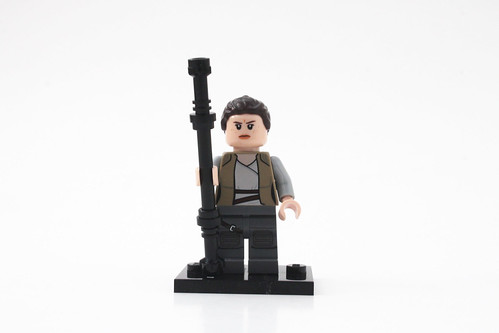 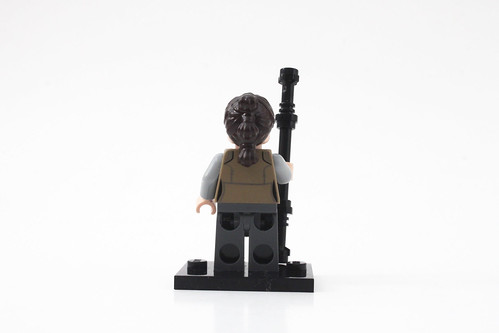 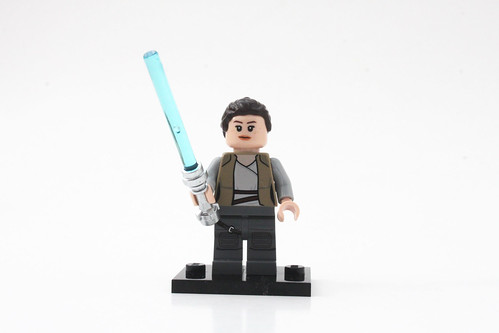 The Porg isn’t a minifigure but it is the last character in this set. Although it look slike the same one as in the UCS Millennium Falcon (75192), there are some slight differnces in it. This one has some dark gray feathers with a white chest instead of the black feathers and light gray chest from the other one. The head is the same as it uses the BB-8 head with some orange feather printing. 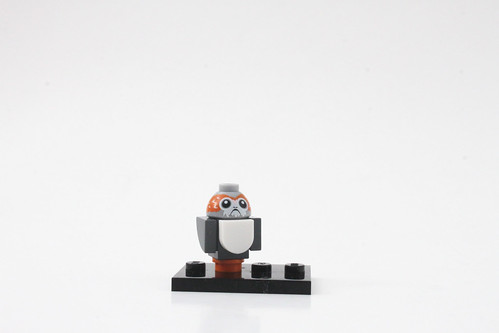 The set recreates Rey’s stone hut on Ahch-To and I feel that LEGO did a decent job with it with the limited amount of pieces given. There are a combination of dark and light gray pieces that are used with some dark tan thrown in to give some color contrast. There’s also some stickers on various bricks to give some additional detailing. To distinuish Rey’s hut from Luke’s hut, there’s brown cloth piece that hangs over the doorway. 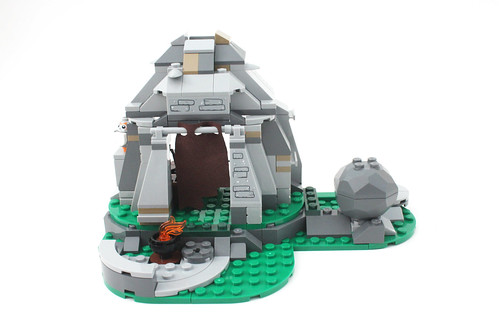 In front of the hut, there’s a small stone area on top of a grassy area. The area is rounded off using some 6×6 curved plates. There’s also a small fire pit that sits on a brown 2×2 round jumper plate. 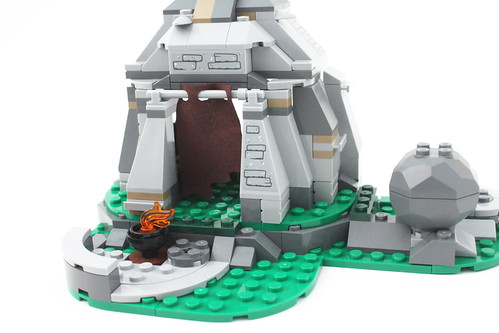 On the side of the hut, you have the training area which was seen in the movie. There’s a large rock that sits snugly in a 2×2 spot surrounded by other smaller rock formations. Next to the rock is a turntable where you stand Rey on there. You can spin the turntable and have Rey slice the rock in half like in the scene. Unfortunately, you can’t really slice the rock in half unless you don’t connect the rock pieces together so you’ll just have to knock it over instead. There’s a trans-light blue crystal piece inside the rock. 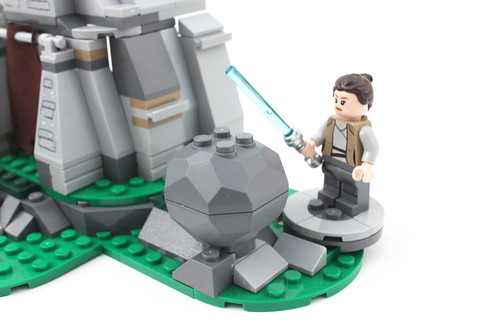 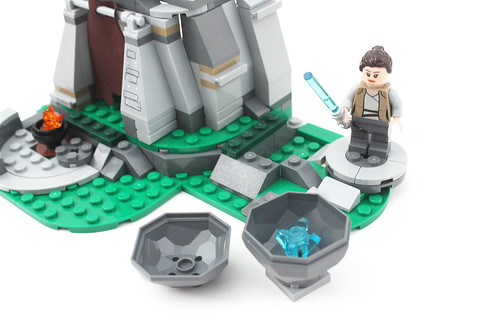 The other side of the hut has more details to show off. It’s well funished with a table and a bed. The bed is on hinges so it can fold up to have more room for the two minifigures inside. Underneath the table, there are a couple of lime green berries. 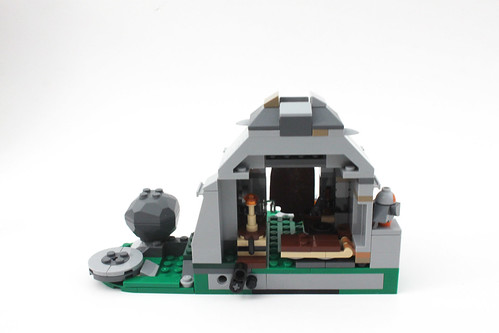 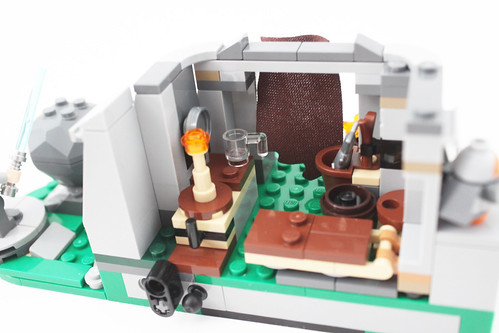 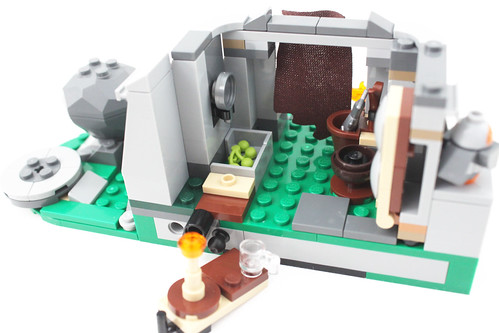 The roof of the hut can be easily removed as it sits on only two studs. This allows you to access the inside of the hut as well as simulate Luke blowing out half of the structure. For an additional play feature, there’s also a Technic lever on the backside to cause a small piece of the wall to explode as well. 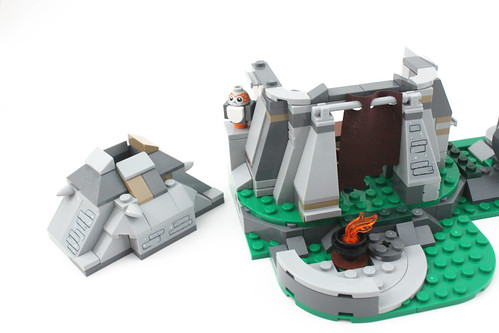 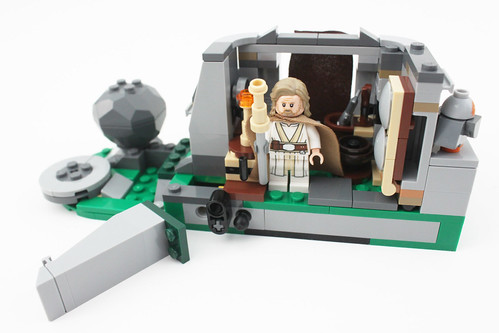 Overall, the LEGO Star Wars Ahch-To Island Training (75200) is a pretty good set. I do like the selection of minifigures but I felt that LEGO should have included one of the Lanai Caretakers especially for the price of this set. $29.99 is a little much for what you get as I think $24.99 would have been a better price point. With that said, I still like how the set looks and the play features are sufficient as kids may enjoy recreating the scenes in Star Wars: The Last Jedi. 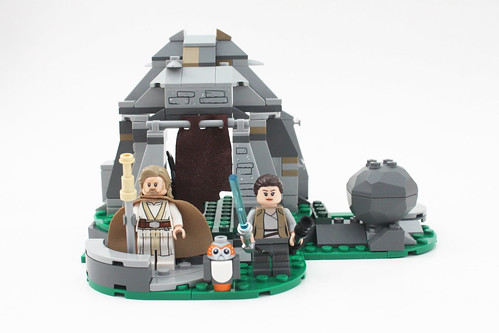