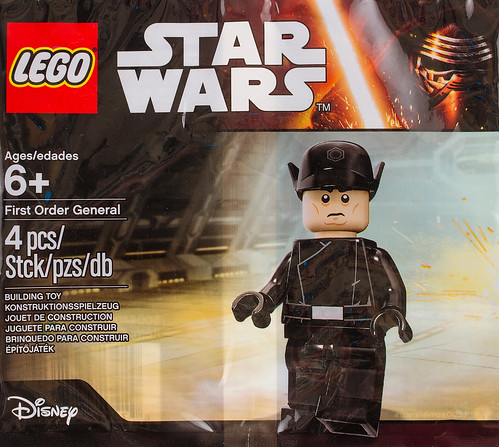 Way back in May, I reported that the LEGO Star Wars: The Force Awakens First Order General (5004406) was listed on Toys R Us’ website. It’s been available at LEGOLAND parks as well as being given out with purchases at San Diego Comic Con but there hasn’t been much info since then on how the majority of the country can get it besides from the secondary market.

Jason over at BrickVibe sent over an image of the Toys R Us October 2016 LEGO calendar and shown on the last week of September, there’s a promotion for a free LEGO Star Wars gift with a $30 LEGO Star Wars purchase. My guess is that the gift could possibly be the First Order General minifigure polybag. I’ll try to confirm whether or not this is correct when I’m able to check Toys R Us’ inventory when I go back to work.