“These aren’t the droids you’re looking for.” is one of the more rememberable quotes from Star Wars Episode IV: A New Hope. In 2010, LEGO released set 8092 – LEGO Star Wars Luke’s Landspeeder. A recreation of the scene when Luke Skywalker and Obi-Wan Kenobi arrive at Mos Eisley and being interrogated by Sandtroopers. This set is an exclusive set to Walmart and LEGO Shop and the box is listed as a “Special Edition.” Retail price on this set is $24.99 which makes it around a decent $0.15/piece. 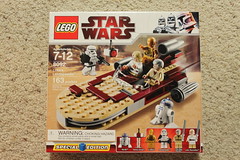 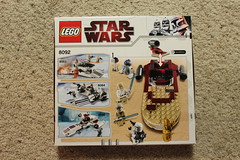 There are 6 minifigs listed by LEGO but I do not consider the sentry droid as one. We get Luke Skywalker, Obi-Wan Kenobi, C-3PO, R2-D2, a Santrooper, and a sentry droid. The differences between the minifigs of the set and the scene are minor but very distinct. First, Luke’s hair is a little too long and bright. A more browner hair piece would suit better. Second, there should’ve been a robe included with Obi-Wan. Finally, the Sandtrooper has a black pauldron instead of the orange one which I would’ve preferred to make it more movie accurate. 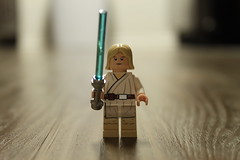 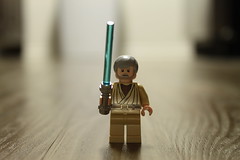 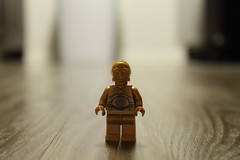 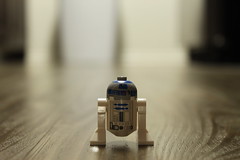 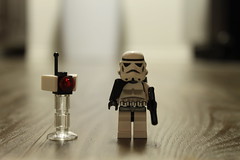 The build itself isn’t too difficult to make. The landspeeder sits two minifigs with the steering wheel on the right side. The engine on the left side of the speeder is different from the other two. The tubes up front makes the ship better than if it was just solid bricks. The gimmick of this set is the back engine pops off and you get a storage compartment for the lightsabers. For this to work, you have to take off the blade from the hilt as the lightsabers are a bit long to fit whole. 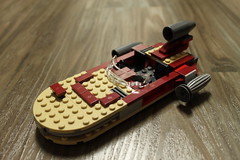 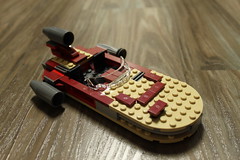 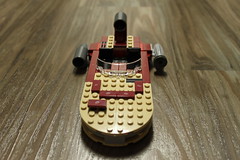 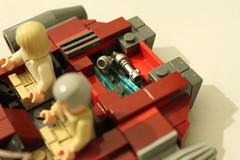 There are pros and cons to Luke’s Landspeeder. I like the ship itself. There color scheme on it makes it look like it’s been in the desert. I also like how LEGO included C-3PO and R2-D2 in the set. The minifigs makes the set work very well.

The cons of the set is also the minifigs. I”m disappointed that Luke’s hair looks more like a girl’s than his own. Also, i felt that Obi-Wan looked too bland without his robe. To re-enact the Mos Eisley scene, I used Obi-Wan’s robe and hood from the Millennium Falcon set to make it more movie accurate.

I would recommend picking up this set if you aren’t afraid of the minor complaints. As LEGO starts to phase out the 2010 sets, this one might not be around much longer and at $24.99, it might not be a bad pickup. 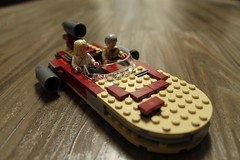 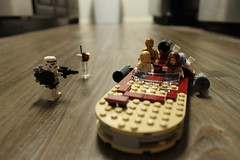