The second set that LEGO was selling at the 2013 San Diego Comic Con was the LEGO Star Wars SDCC 2013 Exclusive JEK-14 Mini Stealth Starfighter. Like The Hobbit Micro Scale Bag End, you had to get in line for a ticket to purchase the small set. This set contains 105 pieces and retails for $40, a $0.38/piece. My set was numbered 168 of 1000. There is one unnumbered bag and one instruction booklet. 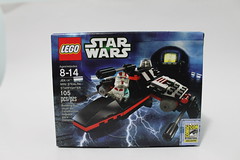 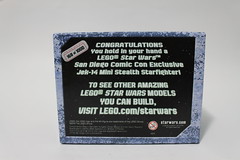 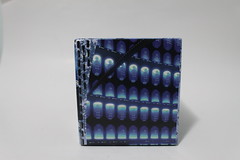 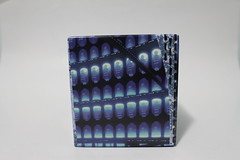 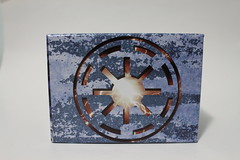 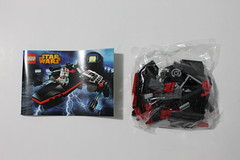 Before I start with the the review of the minifigure and set, I have to say that I had a little issue with the pieces. When I opened the bag, the JEK-14 minifigure was already built along with his lightsaber. Also, the hairpiece that he was supposed to have was missing from my bag. I’m not sure if it was just my set or with the whole production line.

of the starfighter. His torso and legs are mostly white with a little bit of red on the chest and back areas. His left arm is a transparent blue with some lightning marks. His helmet is similar to a Stormtrooper’s helmet but with red markings going down the front and blue slits for the eyes. JEK-14 has a double-sided head with a serious look on one side and a power hungry look with blue lightning marks on the other. He has a blue lightsaber with a white hilt as his accessory. If he had a hairpiece it would have been a short black hair that is slicked back but unfortunately I didn’t get that piece in my set. 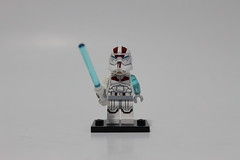 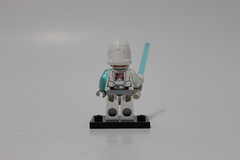 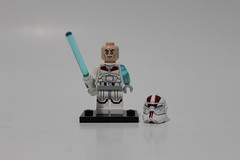 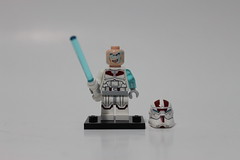 Like I mentioned before, the Mini Stealth Starfighter has a similar look to the original counterpart. You first start building the hull of the ship. There is only one set in the Starfighter. On the top and facing forward is a cannon. Towards the back of the ship is the head of a R4-G0 astromech droid to make it seem like it’s riding along with JEK-14. On the sides of the ship are angled Technic elements for the wings to attach to. After the wings are attached you can either fold the wings in for flight mode or straight out for landing mode. At the end of the wings are a couple of more cannons. 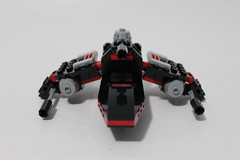 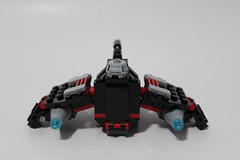 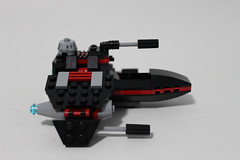 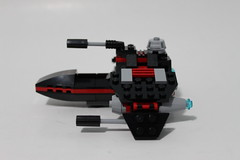 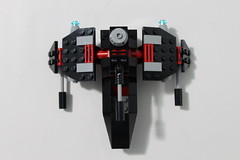 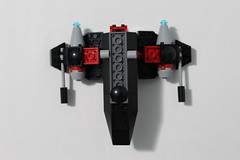 If building both of the 2013 San Diego Comic Con exclusive sets, I think I like this set better than the Micro Scale Bag End. I like how it was designed using less than 100 pieces. The R4-G0 head was a nice added touch as well. There wasn’t any cons with the set itself but I have to knock a few points off because the quality control missed the hairpiece for my set. A few people have asked me for the instructions for the exclusive sets and I’ve uploaded the ones for this set here. 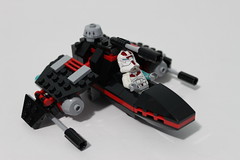