At the 2013 San Diego Comic Con, LEGO announced one of the two exclusive sets they would be selling is The Hobbit Micro Scale Bag End. To get the set, you had to stand in line to get a ticket to purchase the set. I was lucky enough to get one of the last sets they had on the first day. The set consists of 130 pieces and retails for $40 which is a whopping $0.31/piece but that is expected since these are exclusive sets that you can only get at conventions. This set is number 785 of 1000. This year LEGO has decided to go with a small box instead of a tin can like last year’s exclusive. Inside the box, there is one unnumbered bag and one instruction booklet. 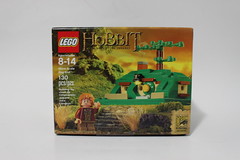 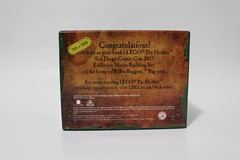 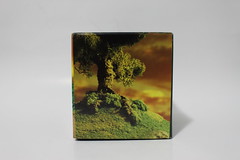 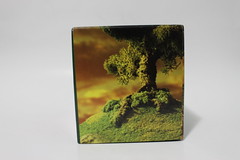 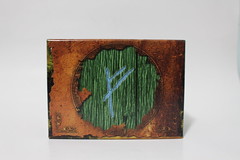 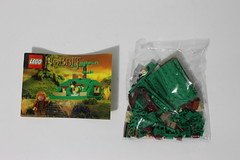 There is only one minifigure in the set, Bilbo Baggins. He is the same minifigure as in the Riddles For The Ring (79000) set. The only difference is that he has the One Ring in this set instead of Sting.

He wears a green shirt with a with a red coat and tan legs. He has a double-sided head with a stern look on one side and a scared look on the other. He has fairly long light brown hair. 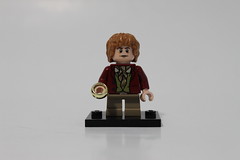 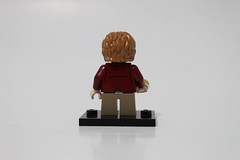 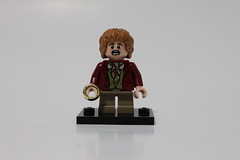 The Bag End is actually a really nice looking micro build for the small amount of pieces you use to build it. In the front, the main thing your eyes go to is the door and the lamp. On each side of the door are tan 1×1 Technic bricks to represent windows. On the far left is a tan 1×2 Technic brick to also look like a window. In front of the door is a grey step and fences. On each side of the Bag End are also windows. In the back, you are able to look inside the house and see many of the things that were in the larger counterpart. Here you can see shelves on each side, a couple of chairs, and the fireplace. On the top of the Bag End is the chimney and the tree that is on top of the Hobbit-hole. 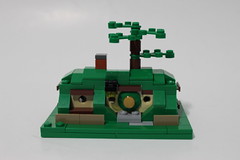 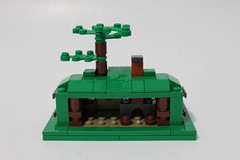 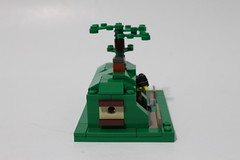 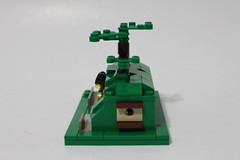 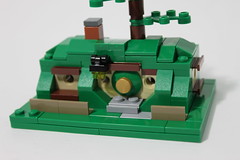 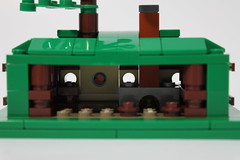 Given that you only have about 120 pieces to work with, it is a great little model and I think it is worth displaying although some collectors like to have it in unopened mint condition. You can buy the set on the secondary market but there’s very little chance for it being at retail price. People who attended SDCC 2013 and gotten a hold on a couple of these sets are looking to make a quick profit off of them by doubling the price of what they’re actually worth. Some might even say that I’ve devalued my set because I opened it but I did it for the people who actually want to see what the set is like. Overall, the Bag End is a really good micro version of the original Bag End set from the Unexpected Gathering (79003) set and it was worth the wait the line for it. Another thing that I liked about the set was that all of the pieces that were given were used up and there were no left over pieces. You can see the instructions on how to build the set here. 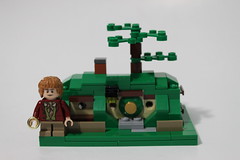