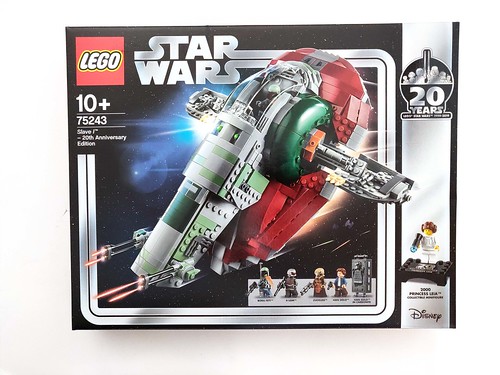 On my last review of the LEGO Star Wars 20th Anniversary Edition sets, I have the Slave I (75243). It has 1,007 pieces and retails for $119.99. This set is the only one from the anniversary series that I have the original 8097 version of it so I’ll be able to do a comparison between the two. 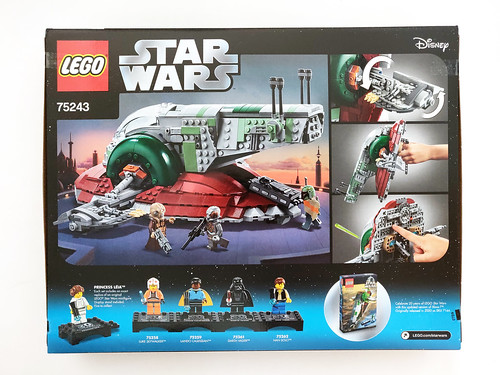 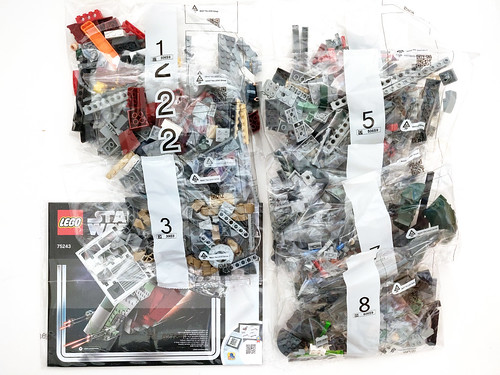 There are five minifigures that are included with this set, Boba Fett, Zuckuss, 4-LOM, Han Solo, and Princess Leia.

Boba Fett is not exclusive to this new Slave I as he is the exact same one as in the Carbon-Freezing Chamber (75137). The torso and legs show him with his iconic look with green, gray, and light blue color scheme. The head is the same Clone trooper that has been used hundreds of times already. The Mandalorian helmet is still as sleek as before. He does have a fabric piece that goes over his shoulder. His accessory is his EE-3 carbine rifle. 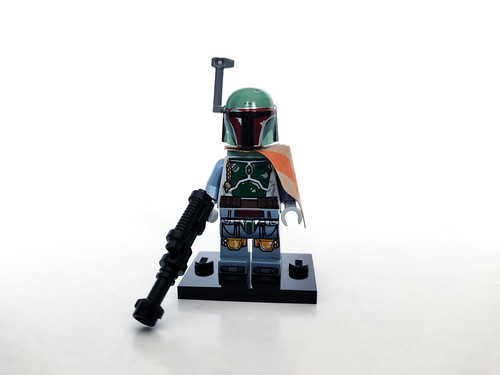 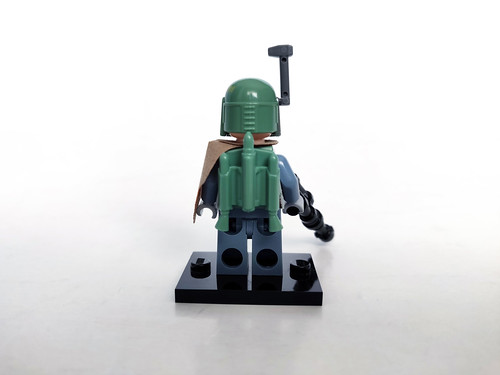 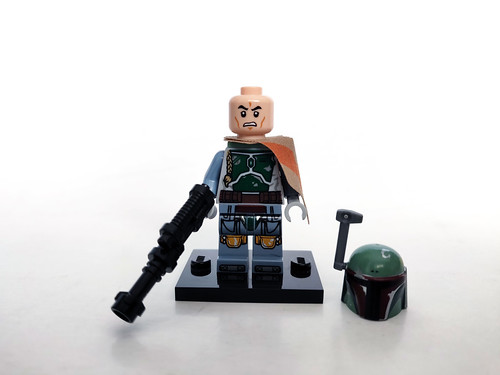 Zuckuss is exclusive to this set and it is one of the bounty hunters that was in the meeting with Vader. The torso and legs show his armor over the cloak it wears. The insect head also has the gas mask molded on to it. The tendrils from the bottom of the head goes down to the torso and legs using some printing. Its accessory is a snare rifle. 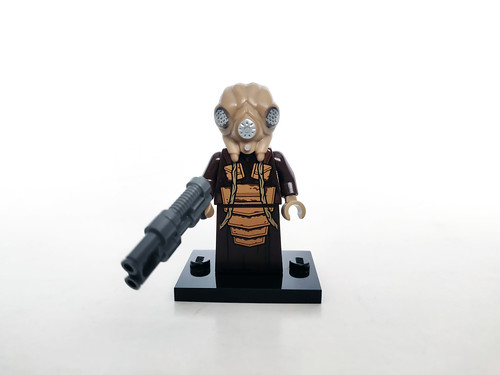 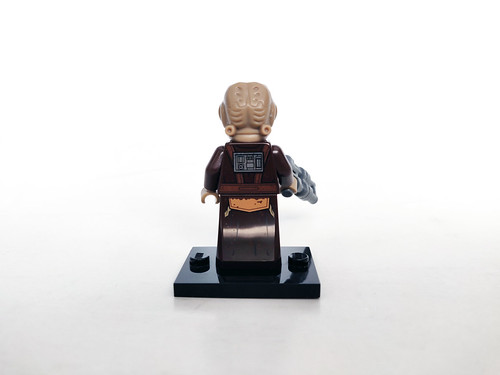 4-LOM looks like an insect but is actually a protocol droid with the heads looking like an insectoid species. The body and legs are dark gray with some orange spread throughout. The head mold has some very large eyes and some detailing on it. Its accessory is a DLT-19 blaster rifle. 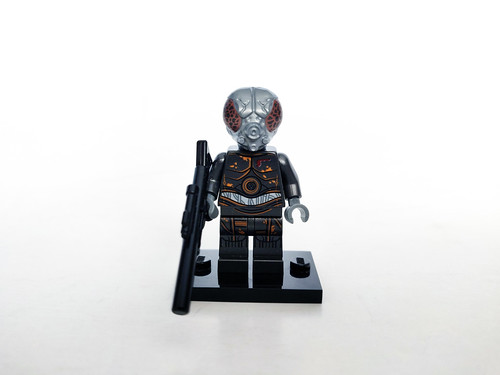 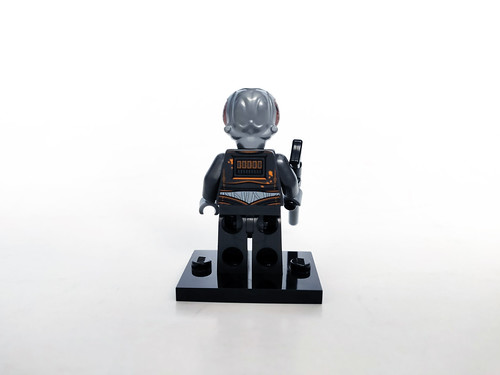 Han Solo is in his Empire Strikes Back outfit which shows him with a blue jacket and brown pants. The jacket has a number of pockets on the front which is accurate to the one in the movie. The legs have some printing of the belt along with the holster. He has a double-sided head with a smile on one side and a stern look on the other. His accessory is just a blaster which is supposed to resemble his DL-44. 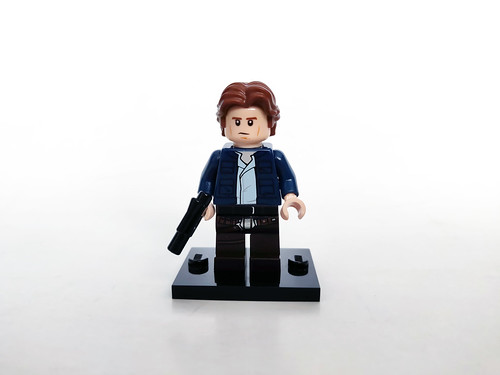 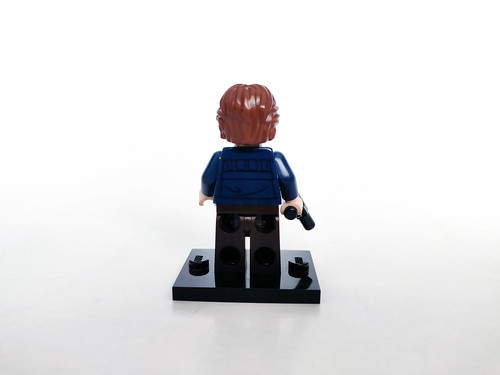 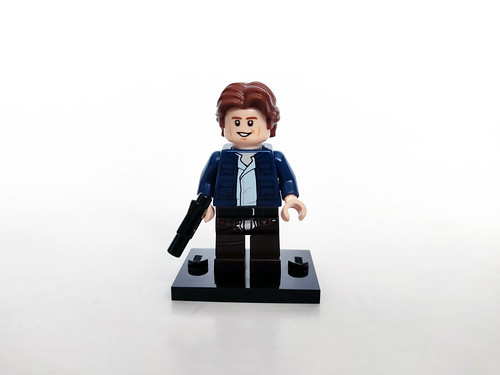 Along with Han, we also get the Han Solo in Carbonite piece which is the same one as the original 8097 set. The Han minifigure is able to clip on the back and the front shows him as he was while frozen in carbonite. One thing to note is that the mold is not updated with the new hairpiece from this set but uses his previous hair so it looks a little off. 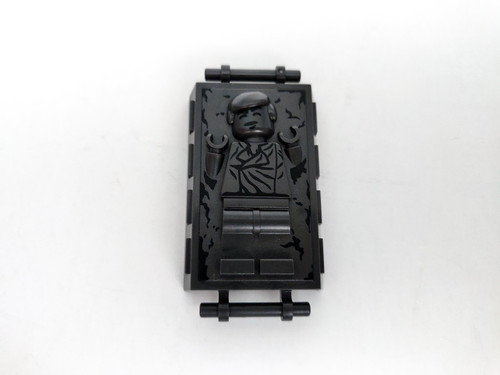 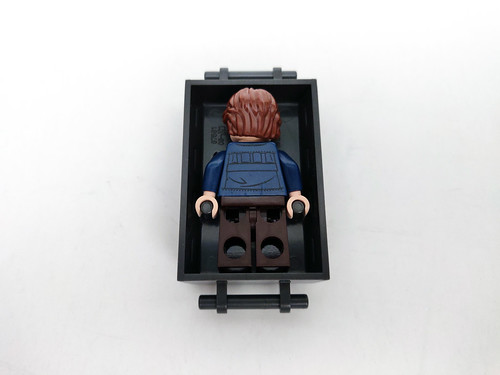 Finally we have the exclusive 20th Anniversary Edition Princess Leia. It shows her with her white outfit and it has some metallic silver printing of the belt on the front of the torso. The back has printing of the 20 Years of LEGO Star Wars on the back. She does have the yellow head with red lipstick. Her iconic bun hairpiece is also back. Her accessory is a blaster which uses a microphone piece. 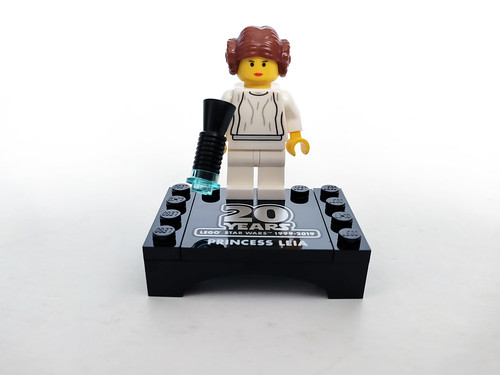 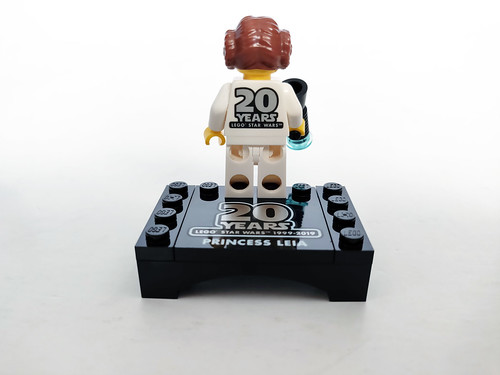 Like with the other LEGO Star Wars 20th Anniversary Edition sets, Princess Leia also has a stand with a printed piece on the plate piece and it is able to connect with the other stands from the wave. 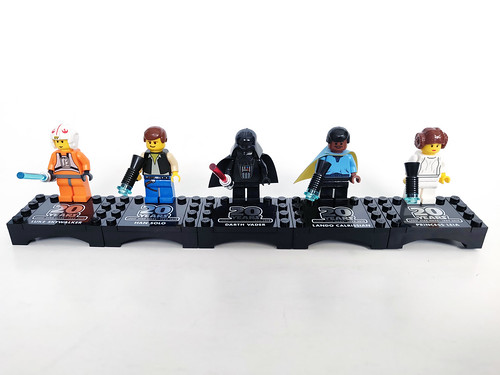 As I mentioned before, I do have the 8097 version from 2010 and the new one is very similar to it with some updates. The length of it is just a tad smaller while the width from wing to wing is a few studs shorter. The shape of it is pretty accurate and has a lot more detailing because of the parts used for the updated version. 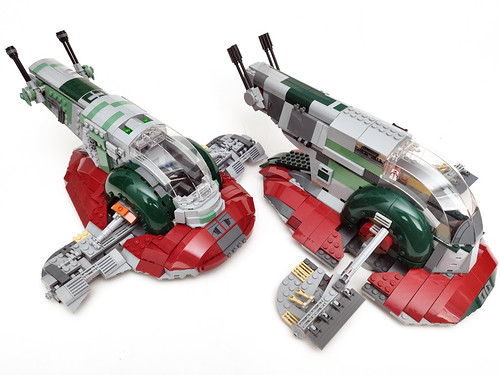 The exterior on the sides shows more studs while using a color scheme of sand green, dark green, and light gray. Unlike the 8097, this Slave I does not have any hidden weapons that flip out but it is shown right in the middle right under the cockpit. The middle part is just made up of Technic parts to keep the whole section stable. 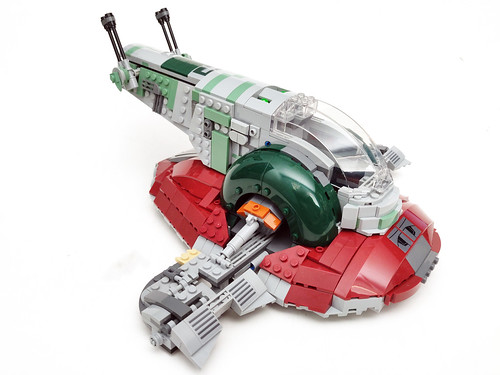 Speaking of the weapons, there are two spring loaded missiles that are activated by pulling down on the red switches on the back of the ship. These replace the flick-fire missiles from the previous version. 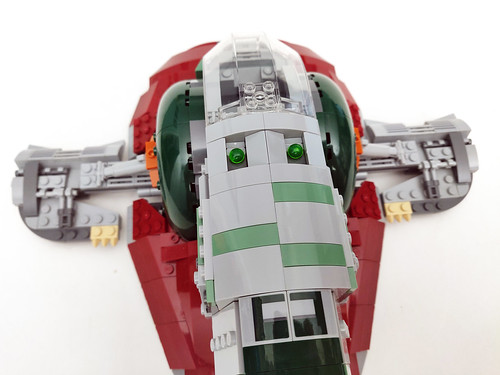 The cannons at the bottom of the ship have been updated with different parts and have a bit more detailing. Both are able to rotate individually as they are not connected to each other. 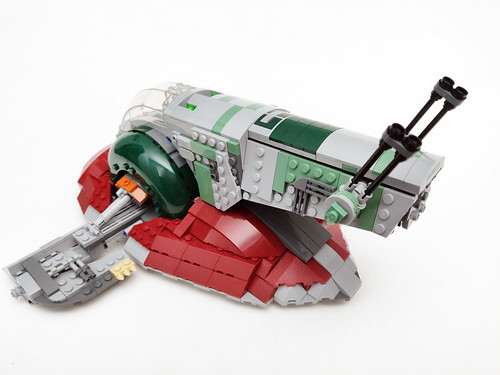 At the very bottom, we have the boarding ramp which is able to lift up to reveal the cargo hold that stores the Han Solo in Carbonite piece. I also use it to store the extra missile and it fits fine. 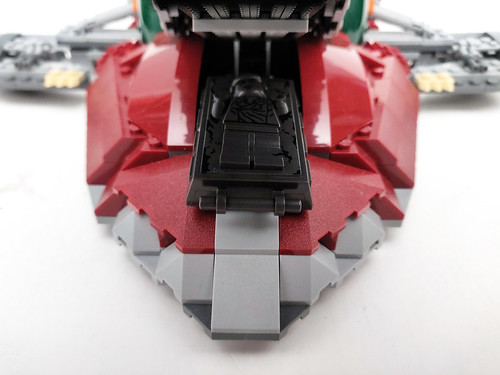 The cockpit area is a bit smaller than before but the functionality of it works the same way as before. By using a Technic gear system, the seat is able to rotate while the Slave I is in flying or landing positions. The stabilizer fins are not connected to each other and I think this works against the build because sometimes the fins don’t want to swing even though its in the corresponding flight mode. You just have to make sure that you don’t connect everything too tightly here or else the fins won’t move like it should. 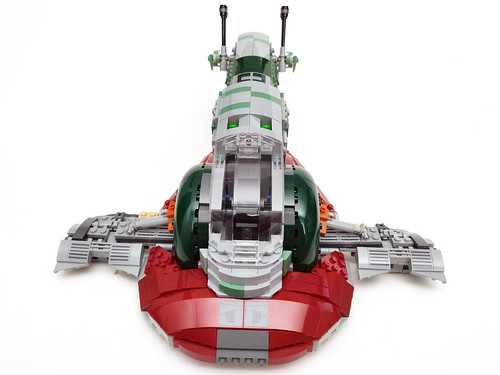 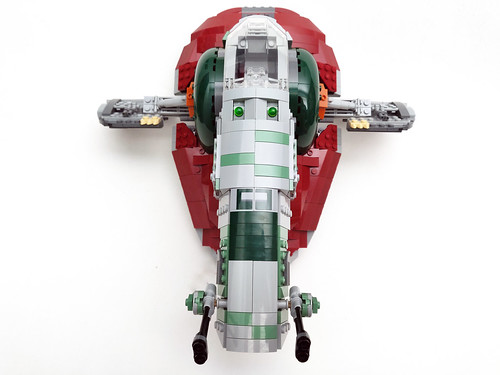 The back of the Slave I is just ugly as it just shows the exposed backs of the plates and bricks. Again, we have the two red switches at the top to launch the spring-loaded missiles.

One new thing that LEGO implemented is the carry handle in the center that uses some Technic beams. This is connected to the overall frame and it provides a lot of swooshability and enhances playability. It doesn’t feel too heavy to carry it this way. 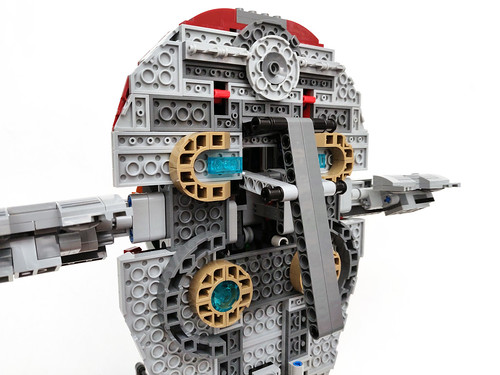 Overall the LEGO Star Wars Slave I – 20th Anniversary Edition (75243) is a decent set that has some good updates from the previous version. I do like the new handle on the back to swoosh it easier. The spring-loaded missiles are somewhat of an eyesore since they are exposed right in the middle but the functionality of it is nice. The minifigure selection is perfect with some of them being exclusive only to this set. 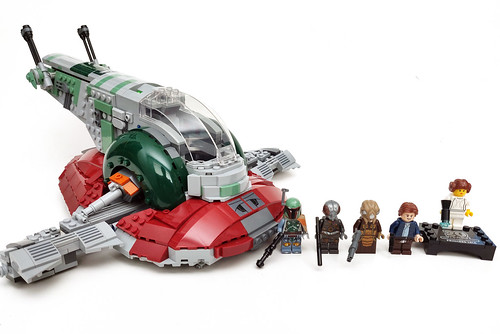