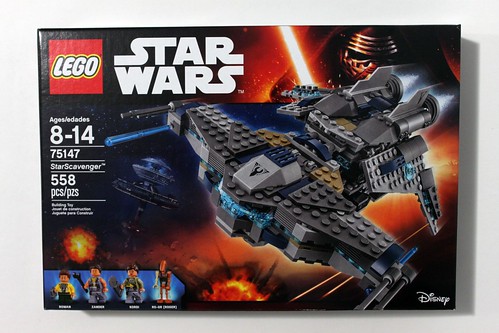 With my second review of the LEGO Star Wars: The Freemaker Adventures sets sent over by LEGO, I have the larger of the two sets with the StarScavenger (75147). I’ve already reviewed the Eclipse Fighter (75145) a few days ago. It consists of 558 pieces and retails for $49.99. Like with the other set, this is a pretty good price to piece ratio which rarely happens with licensed sets. The contents of the box include five numbered sets, the instruction booket, and a small sticker sheet. I think my set had an error because I got two sticker sheets.

**WARNING: If you haven’t watched LEGO Star Wars: The Freemaker Adventures, I suggest watching it over on Disney XD as it does have an interesting original storyline which is set between Episode V: The Empire Strikes Back and Episode VI: Return of the Jedi. There will be some minor spoilers in the reviews.** 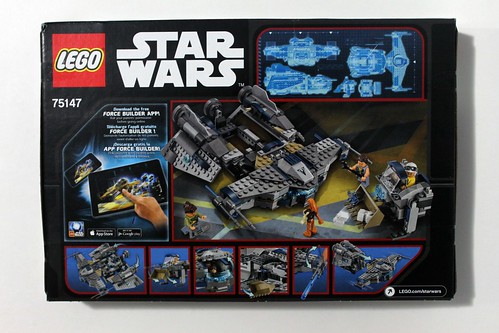 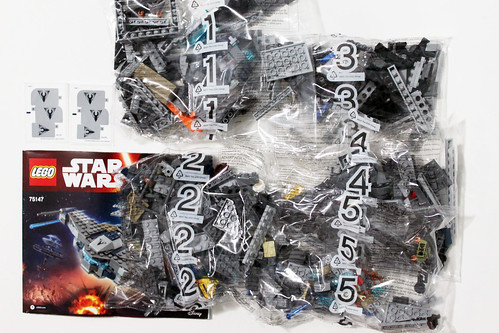 There are four minifigures in this set and they are the main protagonists of the animated series with Rowan, Kordi and Zander, and R0-GR (Roger).

Rowan has a mostly yellow torso for his jacket that he’s seen wearing a majority of the show. The legs are of the short blue variety as he’s the youngest of the Freemaker family. The hands and head is a nougat color that is very useful for custom minifigures. Rowan’s accessories include a pair of binoculars as well as a white helmet with goggles that you can switch the hair piece out with. 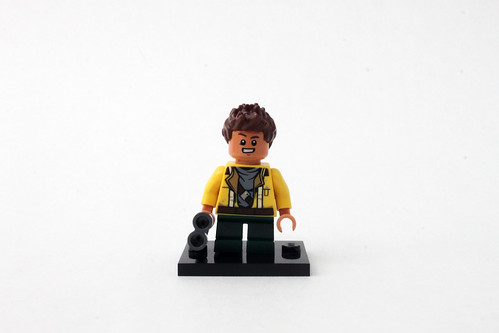 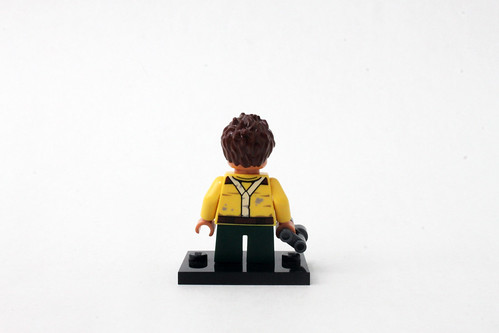 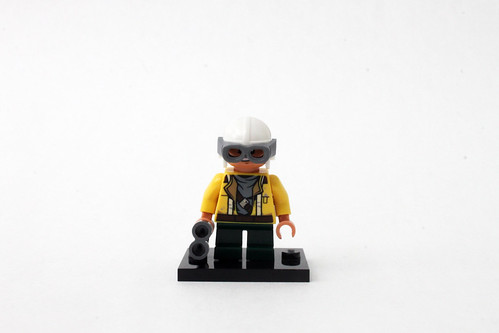 Next is the sister of the Freemaker family with Kordi. Her torso is an olive green jacket with some printing of goggles and a strap going across the chest. The legs are blue with some metallic silver for the kneepads. Like with Rowan, she has a nougat-colored head which again can be very useful in other builds. Her accessory is a buzzsaw. 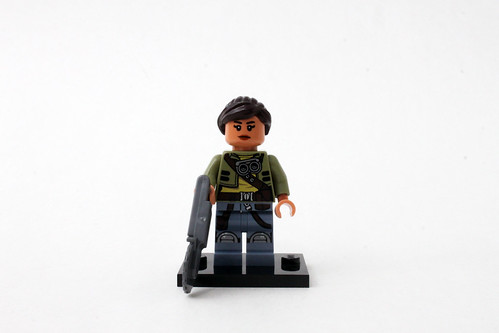 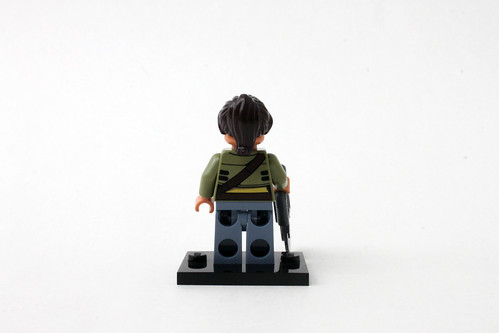 The last member of the Freemaker family is the other brother Zander. He has a pretty cool torso showing him wearing a blue vest over a yellow shirt with some belt printing going across the chest and back. The legs are the same as Kordi. His swept back brown hair piece is actually exclusive to this set. Zander’s accessory is a simple wrench. 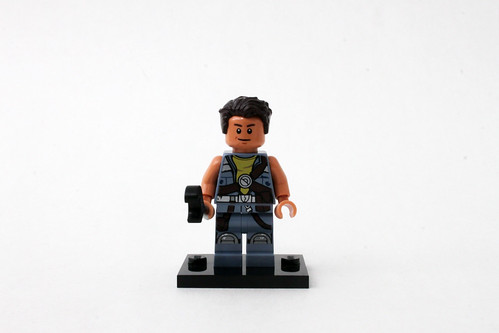 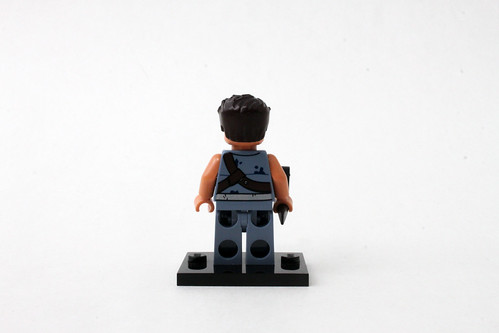 The last minifigure in the set is the B1 Battle Droid R0-GR, pronounced as Roger. The build is the same as other Battle Droids that’s been in other LEGO sets before. One notable difference is that he comes with mismatched colors for the right arm and torso. He also has a 1×1 tile on the back for the transmitter although I’m not sure why LEGO didn’t include the Freemaker logo on it, whether it be a printed tile or a sticker. All of the other minifigures in the set are pretty much 100% accurate so I’m not sure of that decision. R0-GR’s accessory is the red coffee cup. 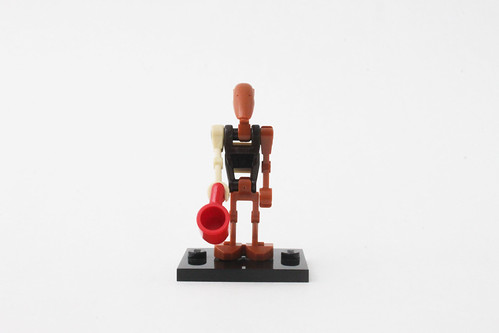 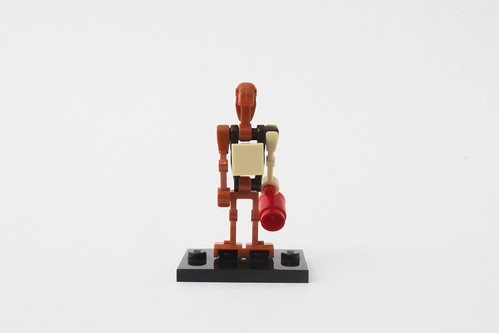 The first part of the set build is the mini scavenger vessel. It’s a one-seat vehicle that is used to pick up scraps. There isn’t much to it except that it does have some skinny legs along with a sand-yellow scoop in the front which is exclusive to this set. The mini scavenger fit inside the StarScavenger very snugly and there’s no worry about it falling out of the hole. There are some scraps for the scavenger such as a trans-blue gem and a couple of 1×2 white bricks with groove. 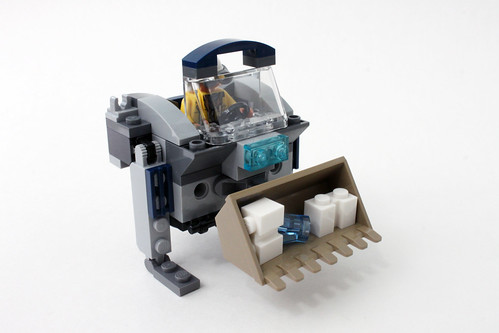 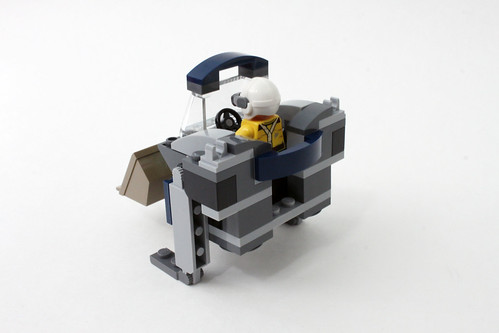 The rest of the build is for the Freemaker’s StarScavenger itself. The first part of the build is the cockpit area in the front. There’s not really any interesting building techniques involved in building it. There are also some wings that attach to the sides. Here you have some flick-fire missiles for the rotating turret areas of the ship. If you watched show, you have have seen this front part of the ship fly by itself without carrying the back scavenger part. 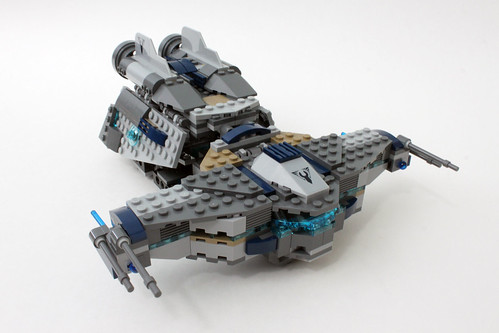 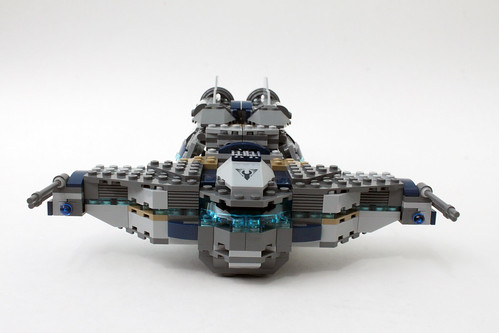 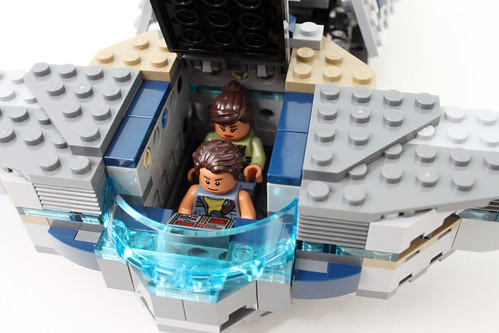 Bags 3 and 4 are used to create the aforementioned back part of the StarScavenger which holds the mini scavenger vehicle. Bag 3 is basically the frame of the storage area. The front of it has some Technic pins to connect to the cockpit area of the ship while the back has one of the engines. Bag 4 has you build the top fins as well as the other two engines. The two fins are able to connect together at the top by the way of a Technic pin to keep the mini scavenger in place. It’s worth nothing that the fins have a place for the last two stickers of the Freemaker insignia. The last bag creates the two adjustable wings that attaches on the sides right beneath the fins and the engines. Once the back is complete and the mini scavenger vehicle is in place, you can recreate scenes where the StarScavenger is able to pick up scraps while in-flight with the scoop at the bottom. 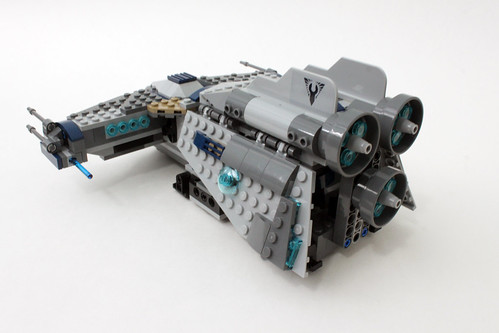 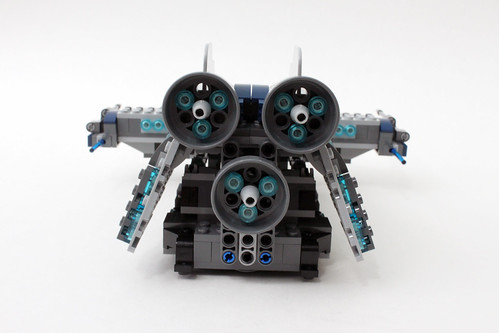 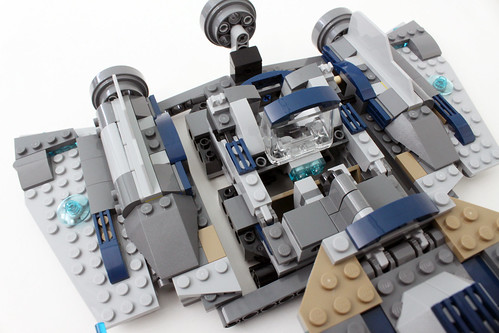 Overall, the LEGO Star Wars StarScavenger (75147) is an interesting set with a lot of play features that kids may enjoy such as the modular parts of the cockpit and the back storage area. The mini scavenger vehicle is a nice addition and is reminiscent of what was seen on a few occasions in the animated series. All four of the minifigures are perfect, in my opinion, as they do represent the characters in the show nicely. 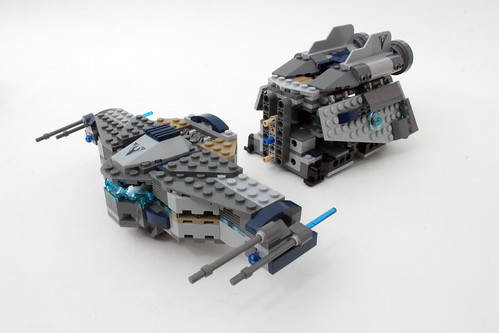 One thing I didn’t like about the StarScavenger was that it is a little too small. The cockpit area only fits two minifigures and Rowan has to be relegated to sit in the mini scavenger. If I remember correctly, the bottom opening of the ship to salvage scraps was a lot wider and not just the scoop of the little vehicle.

Other that that, I think the StarScavenger (75147) is a good set to pick up if kids enjoy the show. I wish there was one more set which included some more of the other character like Emperor Palpatine, Darth Vader, Jabba the Hutt’s cousin, Graballa, or even Wick Cooper. 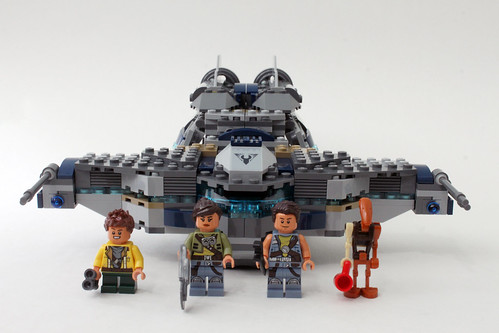