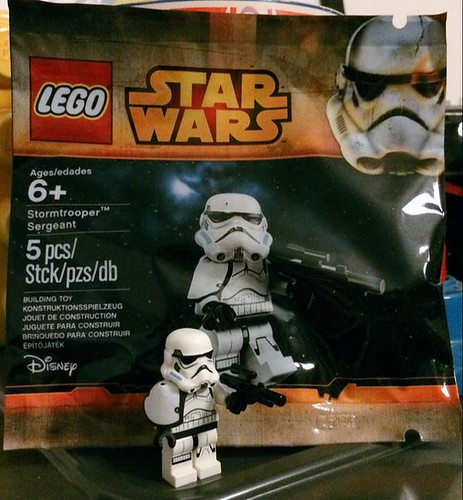 Now that we’ve cooled down a little bit from all the LEGO Scooby-Doo news this morning, let’s turn our attention to LEGO Star Wars. There’s a new image coming out of Eurobricks of a Stormtrooper Sergeant (5002938) minifigure polybag from the Rebels line. There’s no mentioning of how it will be distributed because it’s not on our list of 2015 promotions. If I were to guess, it will be available to volunteers who participate in the 2015 LEGOLAND California Star Wars Days by building and bringing a MOC to display. I’ll have to confirm with Ace from FBTB later if this is the minifigure that will be given out or not. I would also guess that it’ll be available to the general public at a later date, most likely as a gift with purchase.

Update: There’s also reports that the Stormtrooper Sergeant will be available in a goodie bag for the first 500 visitors to the park who are dressed up in a Star Wars costume.