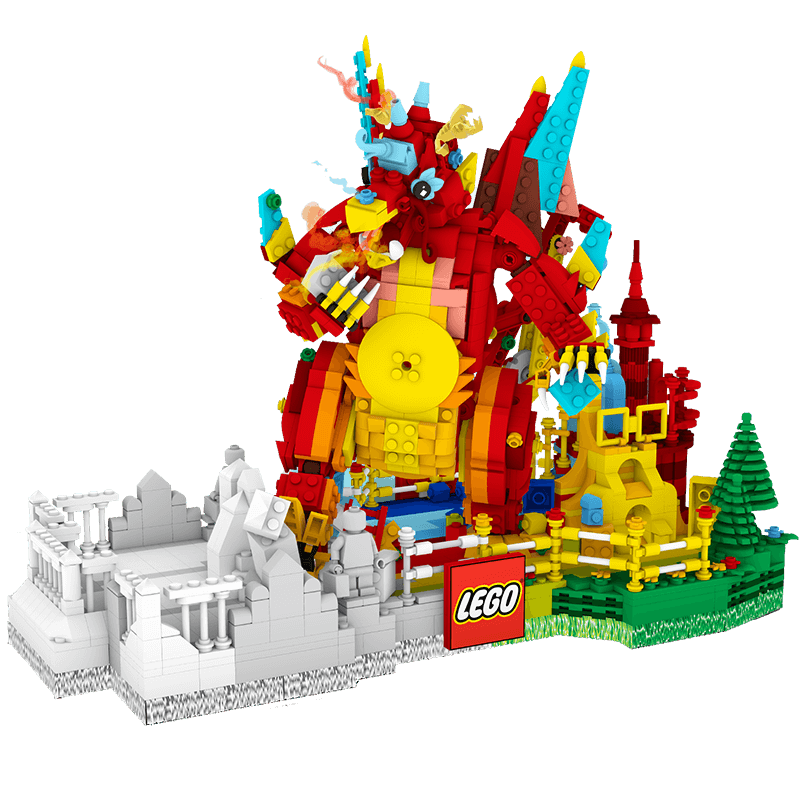 Thanksgiving is coming up very soon and as a tradition, the Macy’s Thanksgiving Day Parade will be happening in New York and LEGO will be debuting a new float there. Coming from a child’s imagination, the float is called The Brick-Changer and it is part turkey and part dragon. This is the second float that LEGO has presented in the parade with the first one being the Carousel of Imagination from 2002. K-Pop band NCT 127 will be one of the artists performing on it.

This November millions of kids and families will be inspired to build – and rebuild — the impossible as LEGO Systems debuts a new float in the 93rd Annual Macy’s Thanksgiving Day Parade®. On Thursday, November 28, 2019, it’s all about brickcraft for fans of all ages as The Brick-changer float takes to the streets of New York City delighting more than 3.5 million spectators and more than 50 million viewers nationwide, with a creative wonder set to rebuild the world, one colorful brick at a time.

“We are incredibly thrilled to welcome the LEGO brand back to the Macy’s Parade family with a brand new float that figuratively breathes creativity into the building blocks of the imagination,” said Jordan Dabby, producer of Macy’s Thanksgiving Day Parade. “The new LEGO float is a conceptual marvel, marrying the creative and design talents of the artists of Macy’s Parade Studio with that of LEGO MasterBuilders to bring to life a magical creature that will inspire a new generation of Parade spectators.”

The new float features The Brick-changer, a magical creature of gargantuan transformative proportions. Born from the mind of a child, she is part turkey, part dragon, and all LEGO creativity. Carving a path through a dull monochromatic cityscape, the Brick-changer channels her creativity to help kids on the float imagine a better world, and together they rebuild the brick-based landscape into a vibrant new metropolis full of endless possibilities. With the use of her imagination and advanced knowledge of brickcraft, the Brick-changer is able to breathe new life into the monochrome bricks, infusing them with color. Always ready to inspire the kid-builders, the Brick-changer’s tail serves as a crane to help imaginations – and bricks – reach new heights and complete the colorful city skyline.

“Children are our role models, because they see the world differently and for all of its creative possibility, and we believe everyone can and should embrace childlike curiosity to create a better world,” said Michael McNally, senior director, brand relations at LEGO Systems. “What better way to spark the entire family’s imagination to play together than a showstopping float during one of the most anticipated family moments of the year?”

The LEGO Group believes every child’s creative problem-solving capabilities should be nurtured so they will thrive in an ever-changing world, and inspiring creativity is more critical and urgent than ever according to the World Economic Forum Future of Jobs Report, which places creative problem solving in the top three skills the job market will require from 2020 on. The LEGO Rebuild the World campaign is a reminder of the importance of creative play in helping children learn how to innovate, solve problems and think critically throughout their lives. Join the Rebuild the World challenge and explore a world of endless possibilities by visiting www.lego.com/rebuild-the-world.

The new float marks the second for the global building sets brand, having previously presented the LEGO Carousel of Imagination in the annual holiday spectacle from 2002 through 2004. That creative design featured a revolving carousel made out of LEGO elements including a helicopter, butterfly, robot, camel, fish, crab, robot, biplane, and construction vehicle.