Toys N Bricks is reporting that the new LEGO Toys R Us Bricktober 2014 Mini Modular sets are being stocked on shelves and being sold individually. As you can see from the image above, they are going for $19.99 each which is a little high but what can you expect from Toys R Us.

In previous years, these Bricktober exclusive sets are usually free with a minimum purchase of around $60 or so but it looks like you can save some money but purchasing the sets directly now. It may behoove you to check out your local Toys R Us to see if your stores are stocking the Mini Modular sets for sell. 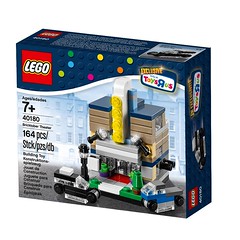