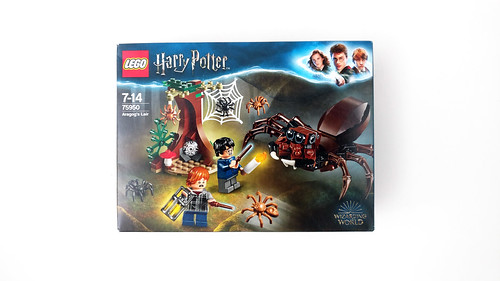 The next series of reviews that I will be doing are for the new LEGO Wizarding World Harry Potter sets that have just recently been released and the first set I’ll be taking a look at is Aragog’s Lair (75950) which is a scene from Harry Potter and the Chamber of Secrets. It is the second smallest set in the wave coming in at 157 pieces and retails for $14.99. The contents of the box include three unnumbered bags and a small instructions booklet. 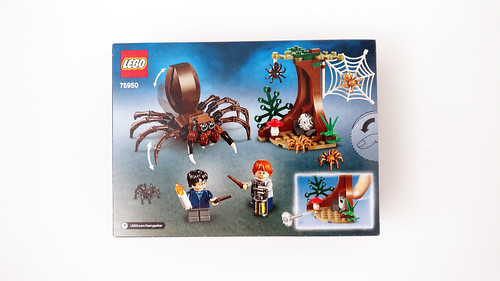 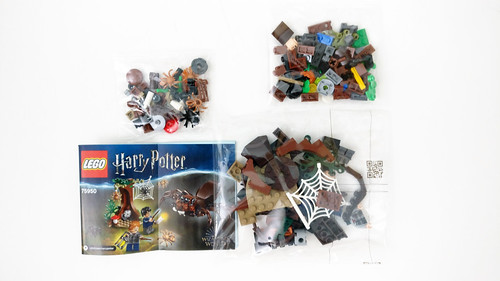 There are only two minifigures in the set, Harry Potter and Ron Weasley. Harry has on a dark blue jacket over a blue shirt with short gray legs. He has a double-sided head with smile on one side and a scared expression on the other. He does have a new disheveled hair piece which looks good on him. His accessories include a new short wand piece and a candle. 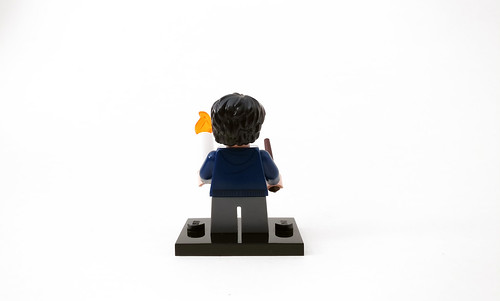 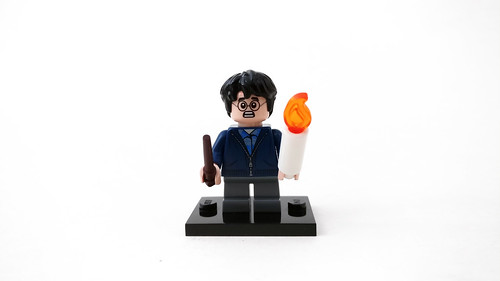 Ron’s look is also faithful to the movie with his plaid jacket over a red shirt. He also has the short legs but in blue. Like Harry, he also has a double-sided head with a smiling and scared expressions. His hair piece is a longer ginger color but I think it’s a bit too long compared to the movie. His accessories include his wand and a lantern. 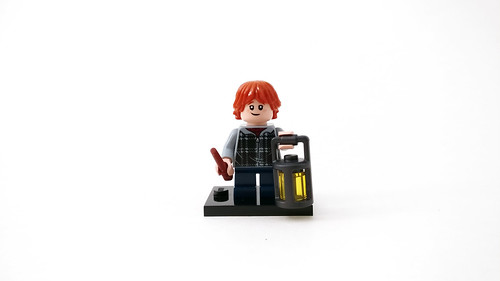 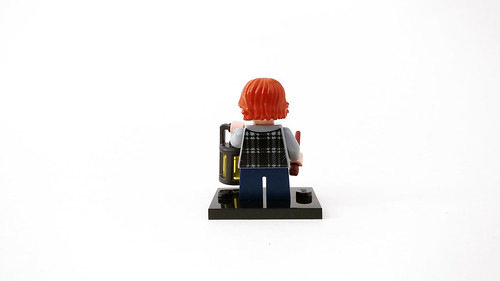 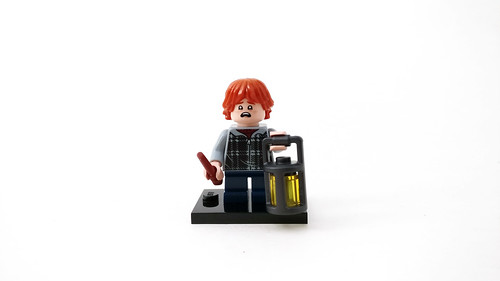 The first part of the build is the Forbidden Forest in which the scene takes place. The tree is a very simple build that we usually see in forest-related sets but there are some nice detailing with it. Throughout the tree are some leaves in dark green and olive colors. Hanging on the tree is a large web as well as a small thread of webbing. There’s even a flick-fire missile of a web that is a printed 2×2 dish. Lastly, there are some brand new black and nougat colored spiders scattered on the leaves and webs. 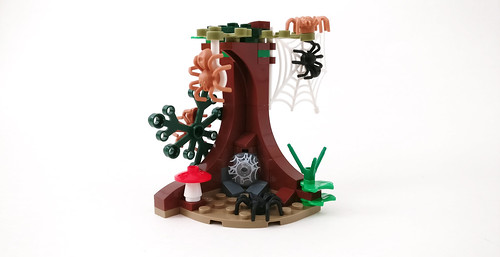 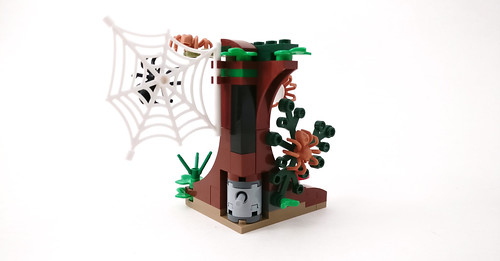 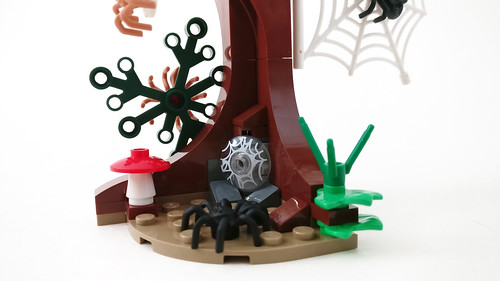 The other part of the build is the Agagog which is an Acromantula that lives in the Forbidden Forest. This version of Aragog is smaller than the previous version of the spider from 2010 with Hagrid’s Hut (4738). I have absolutely no idea where I put my Aragog so I can’t compare the two versions but I can tell that this new one is smaller. 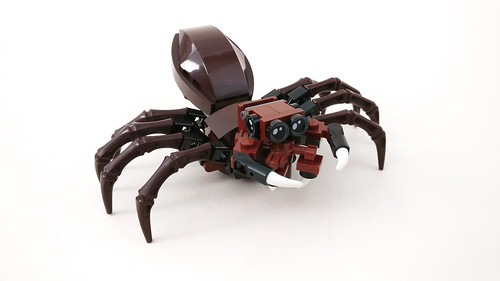 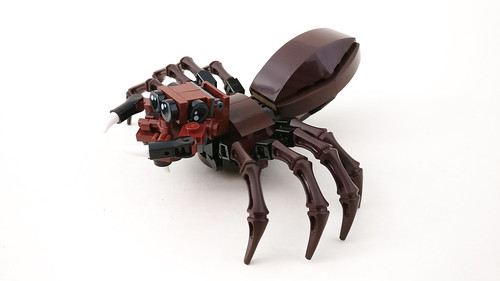 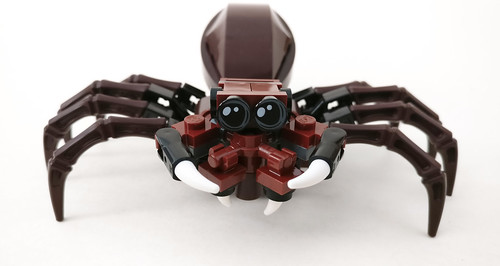 Each of the eight legs are individually articulated and they’re on hinges that connect to the body while the legs are able to rotate as well. Lastly, the abdomen is attached to the cephalothorax using a hinge so it is able to move up and down. 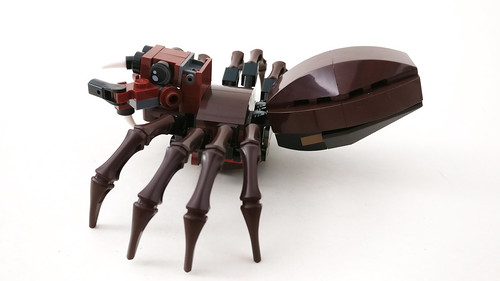 The LEGO Harry Potter Aragog’s Lair (75950) is a good little set and Aragog looks better than the previous iterations however there was an issue with mine. The two clips on the 1×1 plates for the fangs broke off possibly due to it not fitting on the combi hub piece. I’m not sure if anyone else has this issue but let us know in the comments if you did. Luckily I found a couple of extras so I could show the set in full. 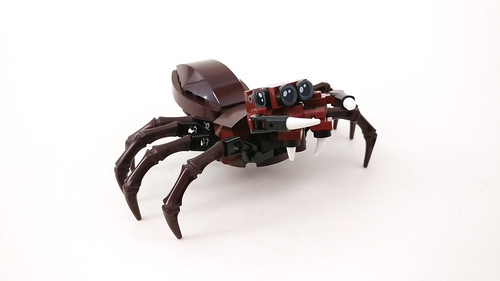 The Forbidden Forest setting is a nice addition and I do like the number of spiders included as his children. As for the Harry and Ron minifigures, they are not exclusive to this set as they also appear in the Hogwarts Express (75955) but they should have been. Their accessories are on point and are film accurate. 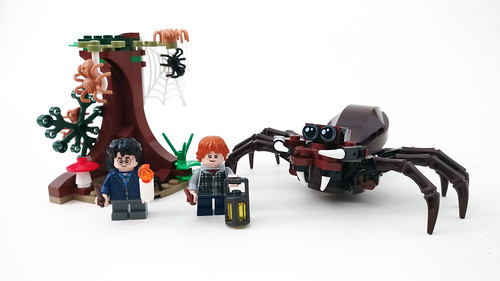