There are now more 2018/2019 LEGO polybags that have started to show up at various retailers. Thanks to Scott P., we now have images of three new ones that he was able to purchase at Target and Walmart. As you can see above, there is a LEGO Creator 3-in-1 Pelican (30571) that has 62 pieces and can be found at Target.

The LEGO Friends Friendship Flower (30404) is also found at Target and it was originally available as a gift-with-purchase promotional item back in February.

Finally, there is the LEGO City Arctic Ice Saw (30360) which was found at Walmart. It has 43 pieces and it was originally available in the UK that was packaged with the National Geographic Kids magazine. 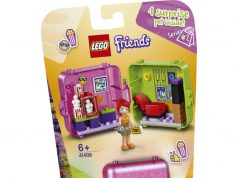