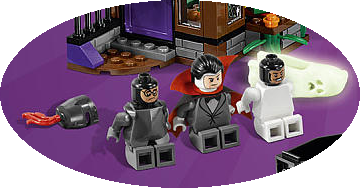 There hasn’t been much news about the LEGO Scooby-Doo sets since the toy fairs from earlier this year but Just2Good on Eurobricks has found a never-seen before image of some of the villains unmasked from the Mystery Mansion (75904) set. This particular set features three villains: the Black Knight, Vampire, and a Ghost. As you can see, the Black Knight and the Ghost has head printing similar to the older Star Wars Stormtroopers with a black head piece and just some face printing. From the looks of it, the Vampire will have a double-sided head in a similar style but it’ll be white instead of black.

If you watched the older Scooby-Doo cartoons, you’ll know that the Black Knight is actually Mr. Wickles and from the image above, you can see the minifigure wearing round glasses just like him. It’s cool to see the sets pay homage to some of the characters from the older cartoon series.