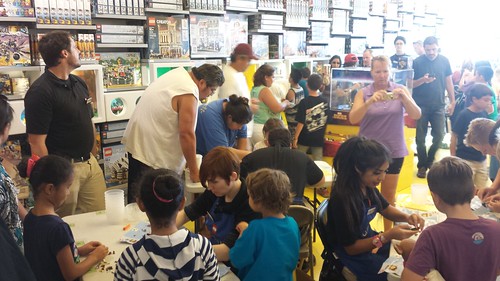 Earlier today was the August 2014 Monthly Mini Build at my LEGO Store in Fashion Valley. This month’s build was a Monkey (40101) and as you can see from the picture below, there were lots of families waiting for the event to start. If you were at the store last month for the Surf Van (40100), it was super crazy hectic. Fortunately for this month, the staff had a plan and they tried something different. To deal with the overcrowding issue, kids that were in line today were given the set and they had the opportunity to either build the set inside the store or just take it home. Many chose to leave but there were still a number of kids who wanted to build it, especially with my good friend Genevieve (see below).

On to the Monkey itself, it contains 46 pieces but there weren’t that many rare pieces. You do, however, get an extra whip which is nice. The monkey’s body is kinda awkward and to me it resembles more of E.T.’s body. The head is on a turntable piece so it can spin a full 360 degrees. It’s accessory is a banana.

Overall, the Monkey (40101) is just an okay set. It’s not as cool as last month’s build but it’s nice to have. September’s Monthly Mini Build will be a Racing Plane (40102). I also got to meet a bunch of new fans of the site as well people knew about the site but didn’t know the person behind it, … Continue