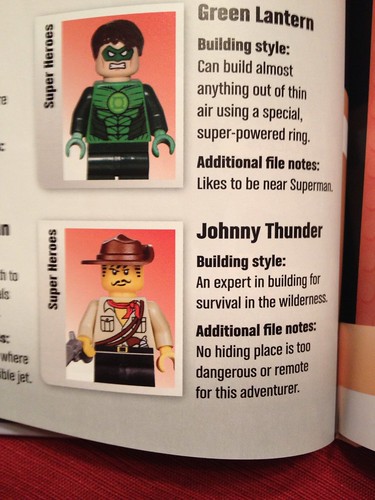 A few days ago, we found out that Johnny Thunder would be making his return in a future LEGO Movie set in the Police Dropship after an 11 year absense. In the image provided by just2good from the The LEGO Movie: The Essential Guide

, we can see that Johnny has a cleaned up look with some updated printed on his torso as well as his head. Everything looks more crisp and his eyes even has larger pupils. His building style describes him as an expert in building for survival in the wilderness. Also, there is no hiding place too dangerous or remote for him.

In the same image, you can also see the Green Lantern. There’s no mention of him being in a set at this time but there were rumors that he would be in one in 2014. His building style is described as he is able to build almost anything out of thin air using a special, super-powered ring (Green Lantern Ring/Power Ring). Additional notes says that he likes to be near Superman.