In our first official review for The LEGO Movie sets, we have the Cloud Cuckoo Palace (70803). When I first saw images of this set, I was confused yet intrigued. Although the set has a lot of “girly” colors, they are so vibrant and insane that I was very interested in it. Plus the Unikitty alone is enough to make me choose to review this set first. The set contains 197 pieces and retails for $19.99 for a $0.10/piece ratio. The box contains four unnumbered bags and a small instructions booklet. 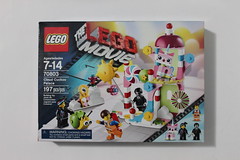 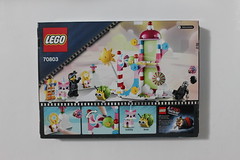 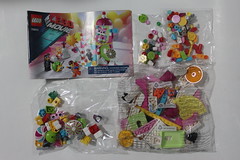 There are three minifigures in the Cloud Cuckoo Palace: Emmet, Wyldstyle, and Executron. Emmet is in his usual orange construction outfit. He has on a back plate with a red brick attached called the Piece of Resistance. Attached on his leg is a tracking device. He has a double-sided head with a happy expression on one side and a scared expression on the other. His brown hair has has a cowlick thing going on in the back. 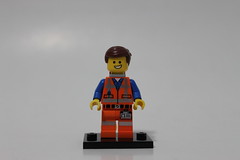 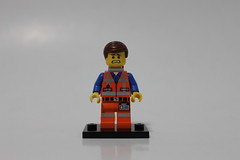 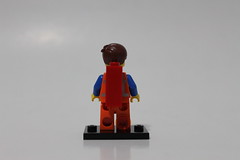 The next minifigure in the set is Wyldstyle. She is in her black/purple/blue hoodie. The hood piece is actually a separate piece which goes between her head and torso. She also has a double-sided head with stern look on one side and an angry look on the other. Wyldstyle has her signature hairstyle which we first saw in the Collectible Minifigure. 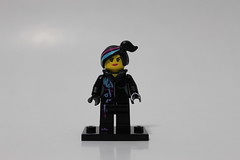 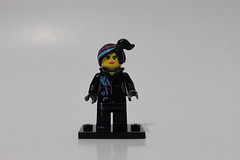 The final minifigure in this set is the Executron. It looks to be a security robot of some sort working for Lord Business who is chasing Emmet because of the tracking device attached to his leg. It is dressed in a sleek security guy suit with sunglasses. It’s hair is similar to Emmet’s minus the cowlick. Executron’s accessory is a pair of handcuffs. 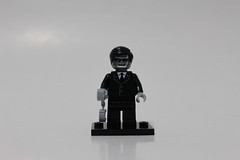 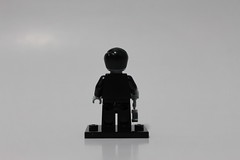 There are a couple of brick-built animals in this set, the snail and the other is a unicorn kitty aptly named Unikitty. The snail is lime green and yellow. It is full of new pieces that I haven’t seen before such as the yellow bracket piece and the lime green satellite dish. It’s actually a pretty cute looking thing. 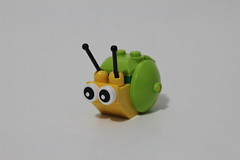 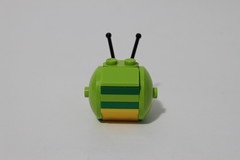 If you thought the snail is cute, wait until you see the Unikitty. It exudes cuteness all over. It’s a cat and a unicorn all in one! Her cat face is no a sticker but is a printed brick. The blue horn sits on a white 1×1 round stud with a hole. The white stud was only seen in the LEGO Games sets and makes its first appearance in a regular set. Her description says she has a powerful secret. I wonder what that secret is… 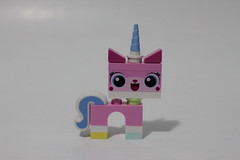 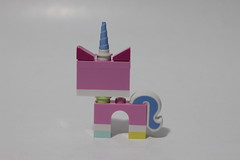 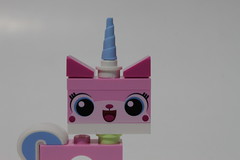 Now to the actual builds of the set. The first part of the build is a cloud shaped catapult. It shoots flowers to help Emmet and Wyldstyle fend off Executron. The flowers are created with some colorful transluscent studs and a transluscent flower piece. You press your finger on the 1×1 round tiles to shoot the flowers. It may be a little hard to shoot things because the flowers may accidentally hit your hand. It’s a pretty cute catapult nonetheless. 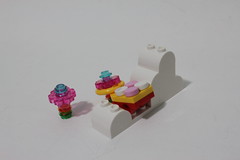 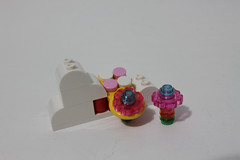 The Cloud Cuckoo Palace itself is what it named as, cuckoo. There’s so much weird things going on that it makes you think you’re hallucinating. It’s so wacky that I don’t even know where to being on review for it. Going from left to right, there is a brick-built yellow sun that is attached to a clear shaft on a 1×2 plate. This piece is pretty rare because it was only in three sets before this one. Right next to the sun are some printed rotating dishes that is controlled by some small Technic gears. The grey gears are the only thing in the set that looks out of place because it sticks out in the company of a myriad of colorful pieces. Right below the rotating dishes are some 2×2 colored round tiles. Further right, are two levels of pure wackiness. On the top level, there are a couple of purple dome pieces in front of a couple of lime-green arch bricks. If you look closely, the palace has a plain R5 droid head at the top. On the lower level, there is another printed dish attached to the wall. In the front are more clouds and round tiles. Each level of the palace has pale green panels with small windows. 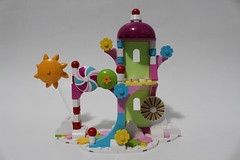 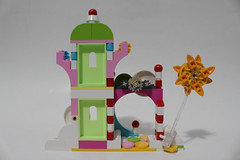 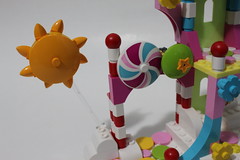 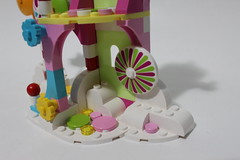 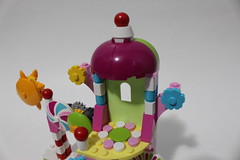 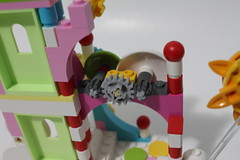 The Cloud Cuckoo Palace (70803) is a very whimsical set to say the least. We’re not sure yet of how much of an impact that it will have in the movie itself but it may give hints to what will happen. Emmet and Wyldstyle gets chased by Executor and somehow the Unikitty will help them out. There are a lot of colorful pieces that are included that could be used in other builds. It was a really fun set to build although it didn’t make any sense what was going on. There were also some things that I didn’t like about it. One was the grey Technic gears due it them “not matching” the other colors of the set. The other thing I didn’t like that much was the catapult. It doesn’t shoot as well as intended. Maybe younger kids will have more luck with it. Overall, the set delivers, not only with all the pieces you get but also with the idea of the set that the designers came up with. It just works for me and I think it will work for anyone.

The set is now available at LEGO Stores, [email protected] 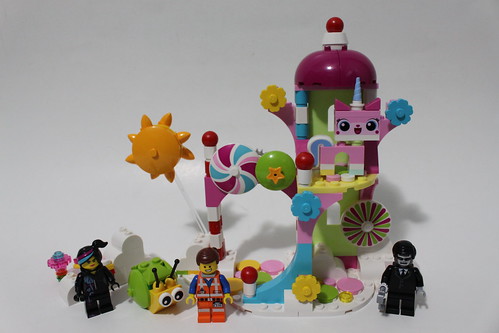