Today was The LEGO Movie Master Builder event at Toys R Us stores throughout the States but unfortunately I wasn’t able to go. My friend John was nice enough to send me some images of what the event consisted of. Like all other building events at Toys R Us, you basically go around the tables the staff has set up and you pick the number of pieces that is listed and put in your plastic bag. After you get all your pieces, you can either build your mechs there or you can just leave.

There are 62 pieces and you can pretty much build what you like. There is also an example sheet that you can follow to build MetalBeard inspired mechs but I think the point of the event is to build whatever you can come up with. There are a number of really good pieces including the new ball joints that are seen in the Mixels sets. There are also a couple of the 1×2 – 2×2 brackets that make for some good SNOT building. Other nice additions include the male and female minifigure heads. The female knot bun hair is a very rare piece because it only came in one other set from last year and that is from the LEGO Star Wars Republic Gunship (75021) from Padme Amidala.

From what I’ve been hearing, it was a pretty cool event by Toys R Us and you get some free LEGO bricks from it. I wish I could’ve went but things happen and I wasn’t able to. Kudos to TRU for holding another building event based on The LEGO Movie because I believe that it’s one of the more popular events they have. If you went to the event, post some pictures of what you guys built in the comments below. 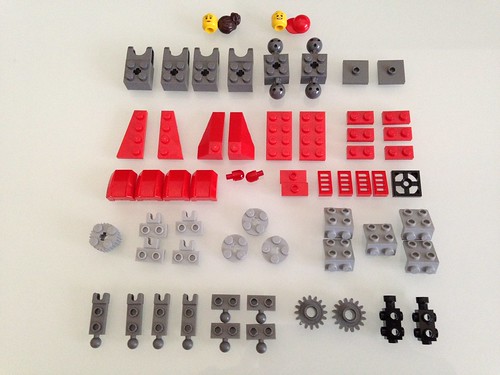