If you’ve been collecting The LEGO Ninjago Movie sets, you’d probably have noticed some strange symbols throughout the sets. This is actually the language of Ninjago and LEGO has been doing some things for fans to help decipher the symbols.

If you’re near a LEGO Brand Store, some of them have been giving out a promotional handout which includes a translator for each of the letters of the alphabet. If you’re not near a store, LEGO has also provided an online version of it (http://www.ninjagolanguagetranslator.com/). Here you have a QWERTY keyboard layout for the symbols but there is also a row for the numbers as well which the physical copy does not have.

I do appreciate LEGO releasing a Ninjago language translator especially for younger fans and now everyone can decode what everything says in the sets. 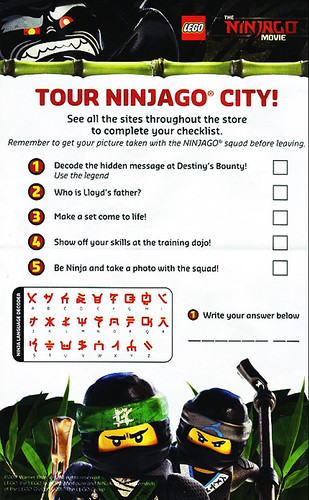