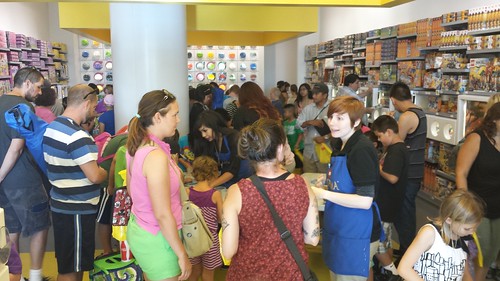 Today, I have some exclusive information about the LEGO Monthly Mini Build Events for 2015. As you may have noticed, the Mini Build wasn’t printed on the November and December 2014 LEGO Store Calendars. This made people wonder if the event was even happening at all. Fortunately, the Mini Builds will be happening for the December as well.

After that, it is very uncertain whether it will be going on or not next year. I can safely say that the Monthly Mini Build events will continue to be held on the first Tuesday of every month as usual! To create a more “premium experience,” as it was told by a close source, and to keep the crowds manageable, the Mini Builds will NOT be advertised on future LEGO Store Calendars, website, or on the door decal.

With this announcement, I expect the crowds to be somewhat smaller but not much since the regulars will probably still come whether it is announced on the LEGO Store Calendar or not. For those who rely on the calendar to see when the Mini Build events are held, they may might not show up since it won’t say. We’ll see what happens once 2015 rolls around.

What do you guys think about the LEGO Monthly Mini Builds continuing next year but won’t be announced anywhere?