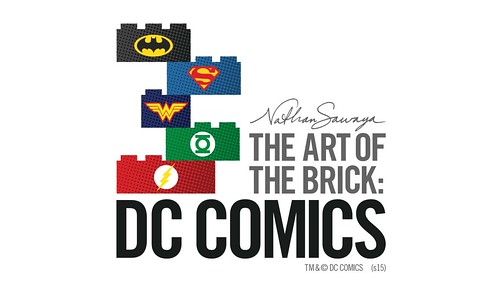 Yesterday, I received a press release for Nathan Sawaya’s next exhibition that will be revealed at San Diego Comic Con 2015 for The Art of the Brick: DC Comics. Additionally, he’ll also have a panel on Thursday, July 9 at 6pm in Room 25ABC for it called DC Comics Meets LEGO Art. The panel will also consist of Jim Lee, and our friends Brandon Griffith and Tommy Williamson. Check out the full press release below.

LEGO® Brick Artist, Nathan Sawaya Teams with World-Renowned Comic Book Artist and Co-Publisher of DC Entertainment, Jim Lee To Draw Live The Concept for a Brand New Batmobile To Be Built Entirely Out of LEGO Bricks

LEGO Batmobile To Be Featured During Sawaya’s Upcoming Global Touring Exhibition, The Art of the Brick: DC Comics

Creativity will reach Heroic heights as LEGO brick artist Nathan Sawaya unveils the first-look at select signature sculptures to be showcased in the global touring exhibition, The Art of the Brick: DC Comics. Attendees of the interactive DC COMICS MEETS LEGO ART Panel will witness the convergence of the world’s greatest Super Heroes with one of the world’s greatest toys. Acclaimed comic book artist and Co-Publisher of DC Entertainment, Jim Lee, will draw LIVE the concept for a brand new Batmobile to be built entirely out of LEGO bricks and later unveiled during the exhibition. The Electric Playground TV host, Victor Lucas will serve as moderator, with production team members, Brandon Griffith and Tommy Williamson, joining the discussion.

World-renowned artist, Nathan Sawaya, has joined forces with Warner Bros. Consumer Products on behalf of DC Entertainment to launch a global touring exhibition unlike any other. Featuring the world’s largest collection of DC Comics-inspired artwork, the upcoming The Art of the Brick: DC Comics exhibit will introduce fans all over the globe to larger-than-life sculptures of the legendary Super Heroes and Super-Villains of DC Comics made entirely out of LEGO bricks.

**Exclusive giveaways will be available for attendees.