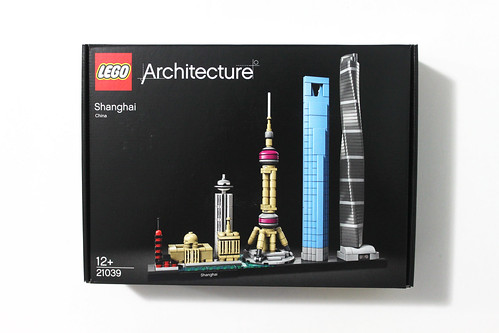 Currently the only LEGO Architecture set has been released for 2018 is for one of the world’s most populous cities, Shanghai (21039). This set is also part of the third wave of the Skyline subtheme for the Architecture line. The set contains 597 pieces and retails for $59.99 but as of this writing, Amazon has it on sale for 20% off. 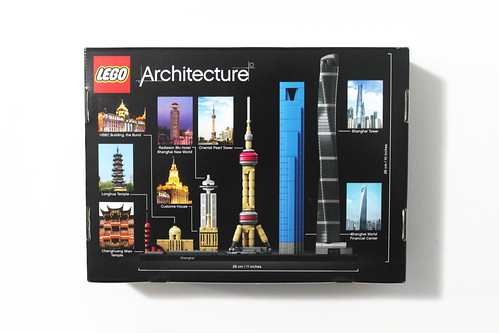 One of the things that make the LEGO Architecture line feel more premium than a majority of other themes is the instruction booklet. Inside it gives you more information about the buildings that are in the set. The same information is also given in Chinese as well. Throughout the build, there are some more fun facts for most of the buildings spread out between steps.

As with pretty much every other Architecture set, you start the build with the base that the buildings sit on top of. I do like the use of the trans-light blue plates and tiles that is used for the water for the Bund which two of the buildings also sit upon. The other notable parts usage here are the 1×2 plates with clips which are used to support the largest buildings in this Shanghai set. 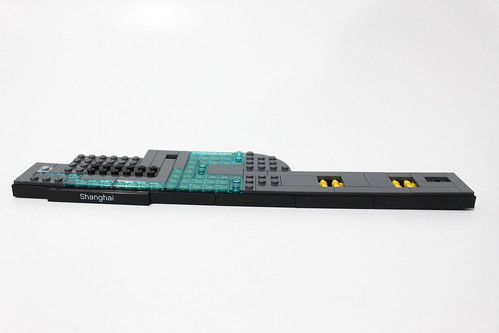 The Longhua Pagoda is the simpliest building in the Shanghai set. You pasically stack some 1×1 plates and 1×1 studs with an antenna on top. I would’ve preferred a 1×1 yellow tile on the bottom instead of a light gray one since the wall on the bottom part of the real building is yellow.

The Chenghuang Miao Temple is created using a 1×3 plate with some red 1×1 studs and some black cheese slopes. Again, a very simple build but not a very good representation of the temple. 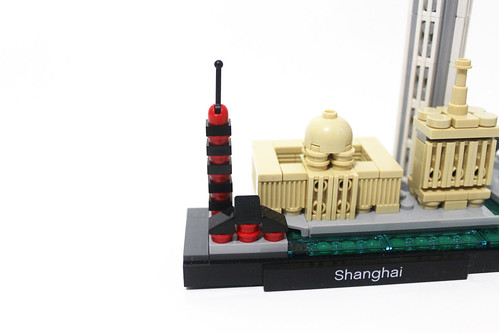 The HSBC Building is pretty straightforward using mostly 1×2 profile bricks for its look. There are tiles on the top and the dome piece to complete the smooth look of it. 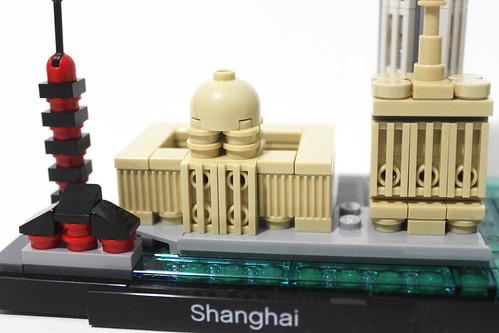 The Customs House is only three wide and uses some 1×1 bricks with studs on the sides along with some grill pieces. It is topped off with some 1×1 round tiles and telescope piece.

The Radisson Blu Hotel Shanghai New World is where the building techniques get a little bit more interesting. White Travis bricks are connected to the 1×8 plate with rail to create the foundation of the tower. For the windows, it uses another of the 1×8 rail plates along with some white 1×2 grill pieces. To finish of a side, it uses a smaller 1×2 rail plate with a white grill piece. The revolving restaurant uses a white dish and a Ø24 Disk for the base with a 2×2 round plate with knob and a gray dish on the top. 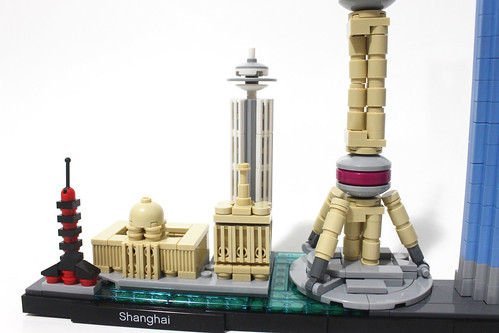 The Oriental Pearl Tower is next the building techniques are on another level from the previous buildings. The base of the tower uses some 4×4 bow tiles for the circular look. The three columns uses some 1×1 round bricks to hold the whole structure up. Not seen are some rods that go inside the round bricks for more stability. The first sphere basically uses some dish pieces with a handle in the middle to hold them together.

Above the sphere uses a stud reversal building technique where things are now built upside-down. There are another three columns which are similar to the bottom level ones. The next sphere again uses dish pieces with a bar in the middle.

The upper sphere uses a 1×1 round brick along with a gray minifigure head and a telescope with a bar at the top for the antenna. 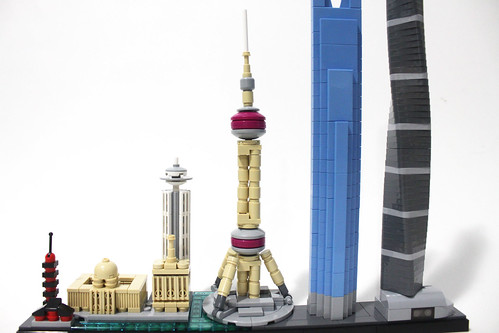 The Shanghai World Financial Center is created using a lot of 1×2 medium blue jumper plates, a total of 62 of them. It also uses 32 of the brand new 1×3 medium blue jumper plates as well. They are then covered up with a variety of tile pieces. The whole building is then clipped on to the base. You may notice that it kind of looks like a bottle opener as everyone who knows about the building informally refers to it as one. 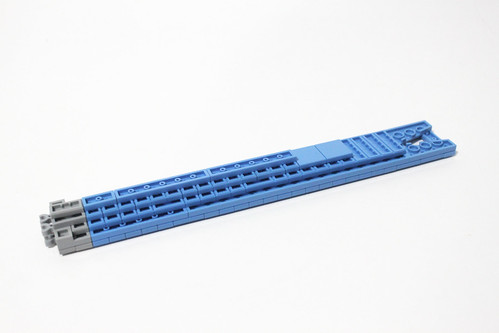 The last building in the Shanghai Skyline is the Shanghai Tower which uses one of the most ingenious LEGO building techniques that I’ve seen in a set ever. When the first images of the set was seen online, fans were very curious on how LEGO managed to create the spiral design of the tower.

The tower uses a lot of Technic halfbeam curves for the general shape of the building but basically uses some flex rods to easily turn the section. There’s also a center pillar that provides support to “lock” in the turning angle. The second half of the tower is built similarly and is also locked in the same way. There are some new dark gray Bionicle tooth pieces used to recreate the curved shaped of the rooftop. 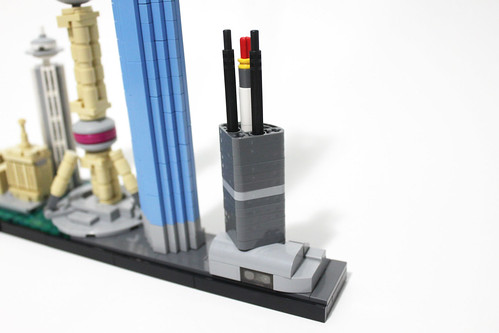 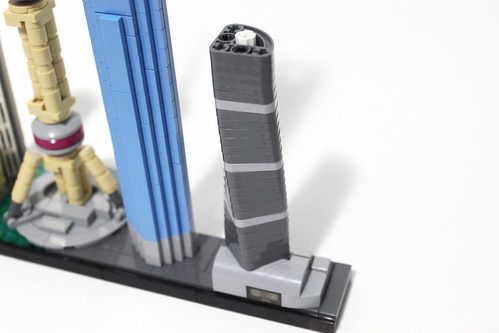 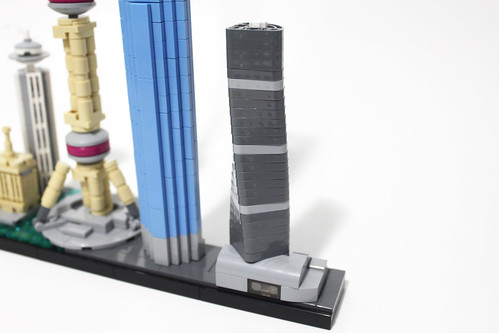 The finished model of the LEGO Architecture Shanghai (21039) skyline set is a beauty. Every one of the buildings utilize distinctive building techniques which makes the whole building experience even more fun. I’ve built a few of the Skyline sets already but this one is probably the best one. We’ll see once the Las Vegas set comes out later. 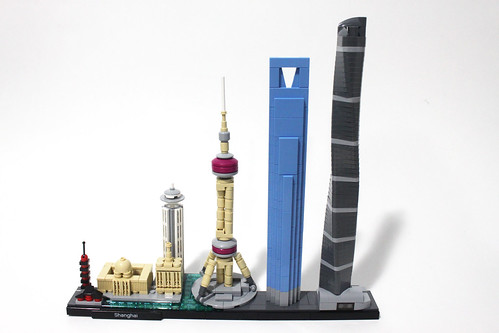 The whole thing is fairly structurally sound but the taller buildings may wobble due to them being thin and tall. The nice thing about the Skyline sets is that they look nice from every viewing angle even from the side. The only building that looks off from the back is the Shanghai World Financial Center as it doesn’t have the smoothness the front of the building has. 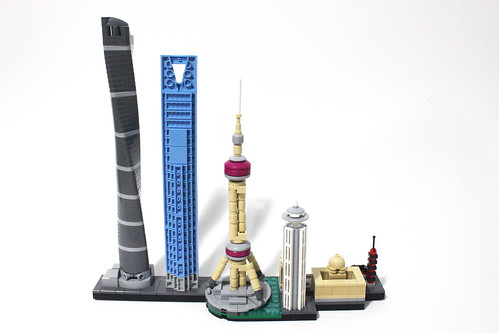 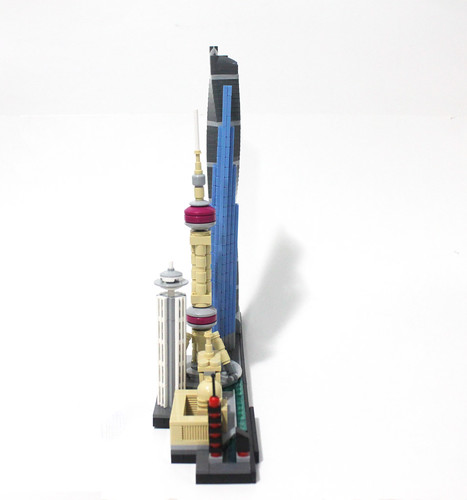 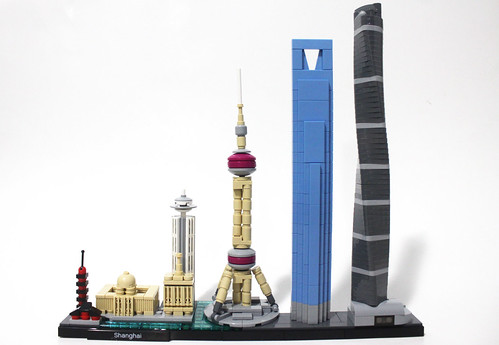