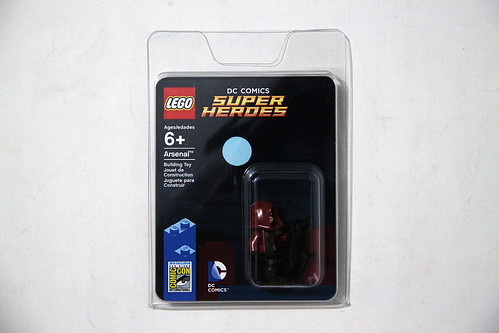 Earlier this week, I wanted your guys’ opinion on what kind of giveaway I should do for the San Diego Comic Con 2015 exclusive minifigures that I have. It looks like there’s an overwhelming response that you guys want three separate giveaways so that’s what I’ll do. I’ll make each giveaway a seperate post using the Rafflecopter app and each giveaway will last about a week.

The first giveaway is for the LEGO DC Comics Super Heroes Arsenal Minifigure. Like I said before, these giveaways are worldwide so those who weren’t able to attend SDCC can have a chance to win as well.

The ways to qualify for the giveaway are stated in the Rafflecopter app below. While you’re at The Brick Fan Facebook Page, feel free to like, share, and comment on this contest post. The Twitter and Google+ entries are optional but they do give more entries for following my other social media outlets.

This particular giveaway will end on 7/31/15 at 11:59:59pm. After that, I’ll update this post again with the winner’s name and I’ll contact them directly.