The holiday season is pretty much started now and the December 2014 LEGO Store Calendar is now available. Although it is the last month of the year, the deals that will be available are decent but not over the top.

Continuing from Novemeber, you will be able to get a FREE Exclusive 2015 LEGO Wall Calendar with purchases of $75 or more. This deal is valid until the end of the year. Like we mentioned before, there will be no Pick-A-Brick boxes this year and they have been replaced by the 2015 LEGO Wall Calendar. The calendar does include some coupons for future purchases next year.

The other “promotion” is the 2 of 2 LEGO Creator Holiday Exclusive Ice Skating (40107) set which is only available the first day of December because it is a leftover promotion from Black/”Brick” Friday 2014 weekend. That promotion runs only from November 28 – December 1.

Although, it doesn’t show on this particular version of the December 2014 LEGO Store Calendar, there will be a Monthly Mini Build Event on Tuesday, December 2. It starts at 5pm but get there early because the line usually gets pretty long.

Update: The December 2014 Monthly Mini Build will be a small gingerbread house. Photo courtesy of murphquake. 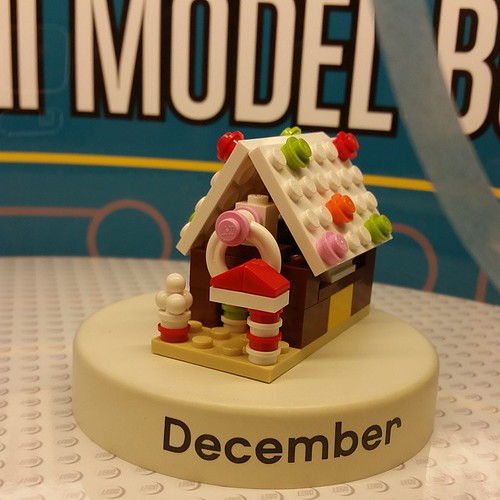 Other than that, there doesn’t seem to be much going on this December. At the bottom of the front page, it does show some of the themes that will be releasing new sets in Janauary 2015 such as LEGO Star Wars, LEGO Friends, The LEGO Movie, and LEGO Disney Princess. You can also create a holiday card using the LEGO Minifigure Family desktop app.

On the back of the LEGO December 2014 Store Calendar, you get some suggestions for gifts as well as some stocking stuffers. It also shows some shipping deadlines if you want to get your order before Christmas.

Note that the December 2014 LEGO Store Calendar does not show VIP early access for the LEGO Star Wars UCS Slave I. I guess we won’t be getting it as a Christmas gift and we’ll have to wait until January 1st to get it unless there’s an announcement later on.