The Indiegogo campaign for LEGO FORMA has officially ended as all of the perks that were offered have been claimed with a few hours left over. The campaign was 1,334% above the 500 perk goal as there were 6,673 perks claimed. I’m not sure how that number came to be as the total number of perks that were available were 6,505. We now have to wait a few months for the delivery of the sets which is estimated to be sometime in January 2019. 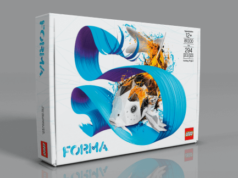 LEGO FORMA Not Launching Any Further