Although the smallest set of the LEGO Marvel Super Heroes sets as well as the Super Heroes line so far in 2012, Captain America’s Avenging Cycle doesn’t disappoint. This set supposedly recreates a scene in the new Avengers movie. It contains 72 pieces and retails for $12.99. The set has a $0.18/piece ratio but you do get three minifigures. There are two unnumbered bags and a small instruction booklet. 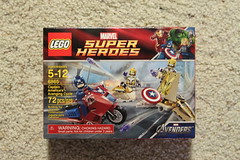 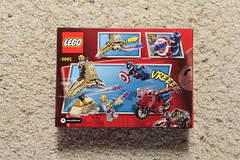 As stated before, there are three minifigs in this set: Captain America, an Alien General, and an Alien Foot Soldier. They all have some nice looking back printing.

For Captain America, well what can you say? Just look him! He looks a lot like the one in the comics as well as the movie. His shield is just simply amazing. The only downside of the figure is that he is missing the boots much like the other the other minifigs in this line. Other than that, good figure.

The Alien General has a dark gray coloring with purple hands and a gold head to represent a mask. It is based on the Chitauri which are from the Ultimate Avengers comics. In other versions of the comics, there are called the Skrull.

The Alien Foot Soldier looks a lot like the General but it has a lighter shade of gray. It also has a different printing on the torso and legs. There is a gun that either the General or the Foot Soldier can hold. 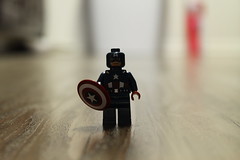 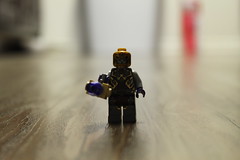 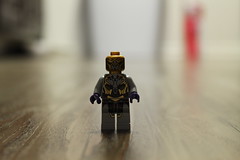 Captain America’s Cycle looks much like Catwoman’s Catcycle but the wheels on this one spins much better and has a bit more details. First is the Avengers logo on the front of the bike. Second are the star decals on the sides. Finally is a holder on the back for Captain America’s shield but I think he looks better with him holding it. 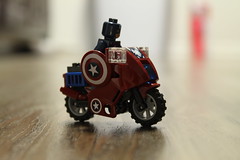 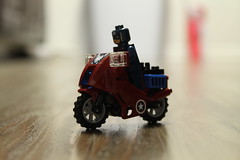 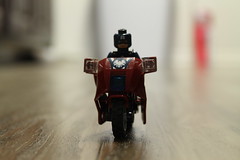 The Alien Gunner Station is a very simple missile launcher. It has some nice gold and tan bricks. Nothing more to describe here. 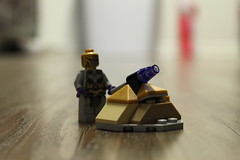 The Alien Spacecraft has a little more building involved but not much. It too has a missile launcher on the bottom of the ship. The wings are moveable as well as the steering/shield piece on the front. There are three stickers to apply to the front and wings. 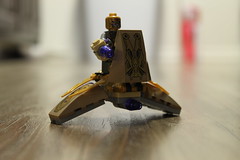 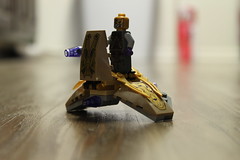 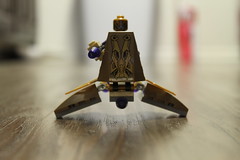 Captain America’s Avenging Cycle is a decent set. The Alien General and Captain America are exclusive to this set but the Alien Foot Soldier appears in the Quinjet Aerial Battle (6869). The set has some playablilty but it would be better to combine this set with the other LEGO Marvel Super Heroes sets. I would recommend picking this set up just for the Captain America minifig. 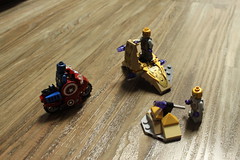