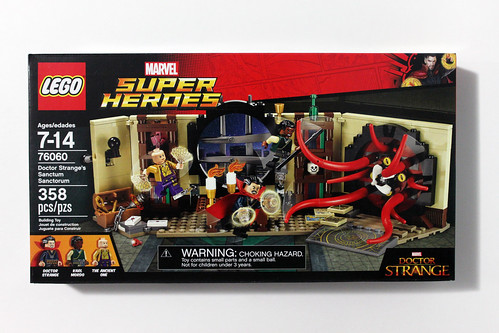 . The set has 358 pieces and retails for $29.99 which is not a bad price for a licensed set like this. The contents of the box include three numbered bags, two instruction booklets, a sticker sheet, and a loose 8×16 tan baseplate. 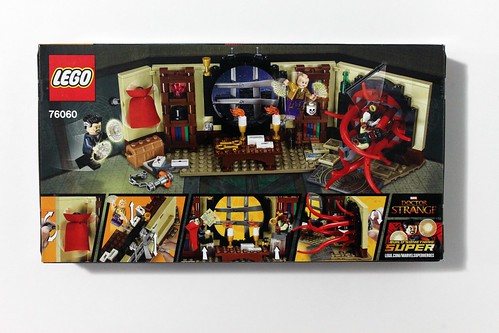 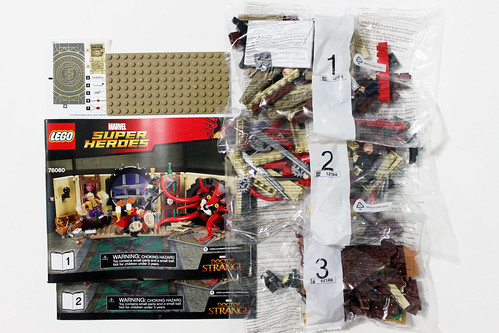 There are three minifigures in this set: Doctor Strange, The Ancient One, and Karl Mordo.

In the new movie, Doctor Strange is portrayed by Benedict Cumberbatch and this is the first time the Sorcerer Supreme has been featured as an official minifigure. The front and back of the torso features dark blue tunic with some detailed printing of wrinkles and such. Around his neck is the Eye of Agamotto which I feel should be more of a pearl gold color to match the one seen in the movie. On the lower torso is some tan printing for the belt wrapping which again isn’t completely accurate to the film. The legs finish out the tunic printing. Doctor Strange does have a double-sided head with a normal and angry expressions. As hair piece used, I would have preferred a more side swept hairstyle instead of a slicked back one although I do like the white/gray streaks on each side. To finish off his look, he does have a red cape to represent the Cloak of Levitation. His accessory includes a trans-clear printed dish piece that shows some runes. 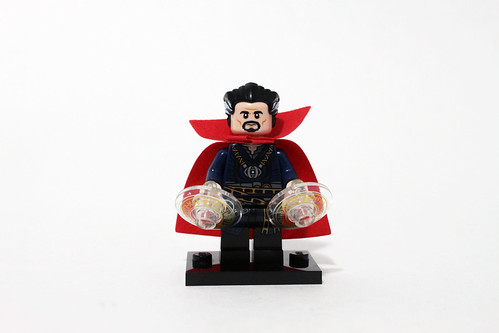 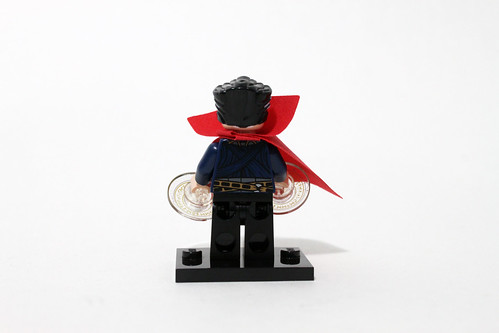 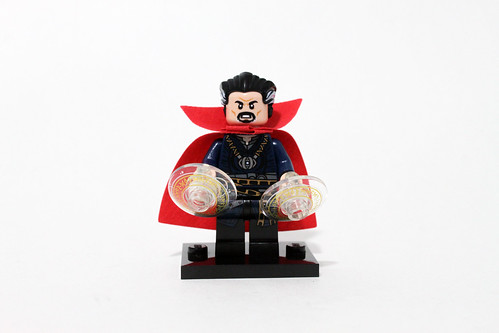 The Ancient One, played by Tilda Swinton, is next up and she has some sort of outfit that consists of a gold shirt with purple pants although it does some nice detailing. The front of the head is pretty plain but you do see some lines on the sides of the head. On the back of the head, there are more of the same lines which meet in the middle. Her accessories are a pair trans-clear fans that also have some rune markings. We haven’t seen much of the Ancient One in the teasers and trailer so we’ll see later on if she will have this outfit in the movie. 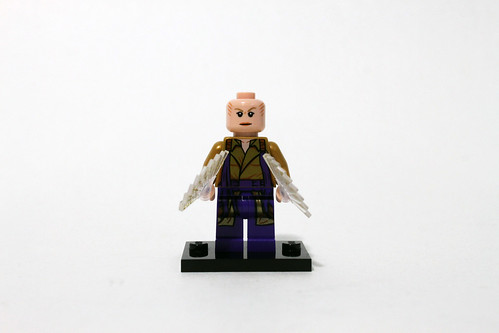 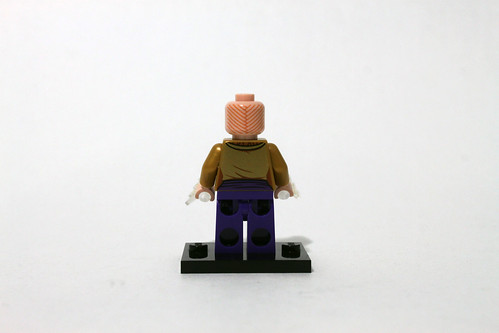 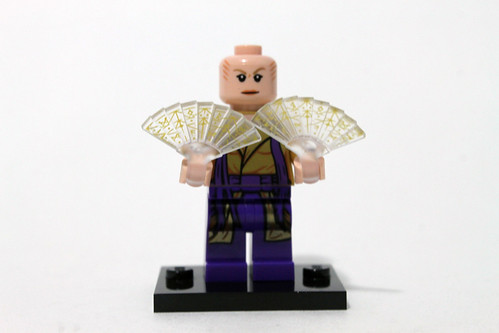 The last minifigure in the Doctor Strange’s Sanctum Sanctorum (76060) set is Karl Mordo played by Chiwetel Ejiofor. Mordo has a dark green tunic with some tan on the inside shirt and sleeves. The legs also have printing for the lower half of the tunic. He does have a double-sided head with a stern expression on one side and an angry look on the other. The hair piece is the one that Finn has in the LEGO Star Wars: The Force Awakens sets. His accessory is a black quarterstaff. 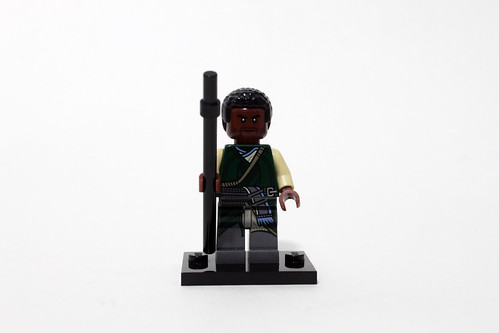 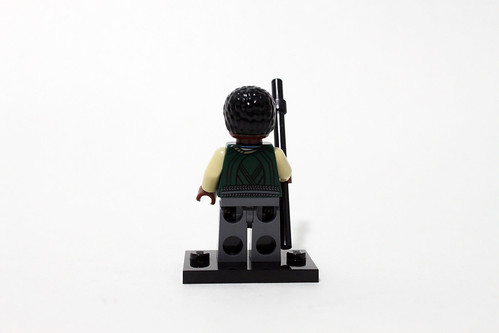 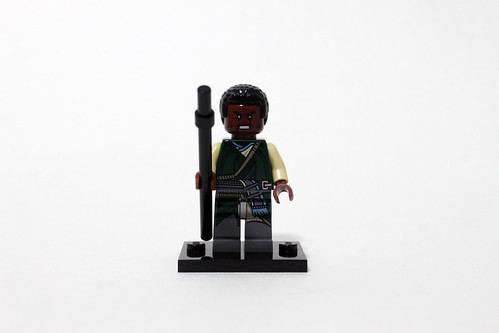 When I first saw images of this set, I immediately thought the Sanctum Sanctorum had a same feel as The Big Bang Theory (21302) with it being inside a room. The first thing that is drawn to your eyes is the red tentacle monster that is coming through the portal on the right side of the room. Although it is not the main antagonist of the movie, it does remind me of a Shuma-Gorath type monster. It features four eyes using some new printed 1×1 round tile pieces while surrounding some rather large teeth that can rotate by turning the wheel on the back. 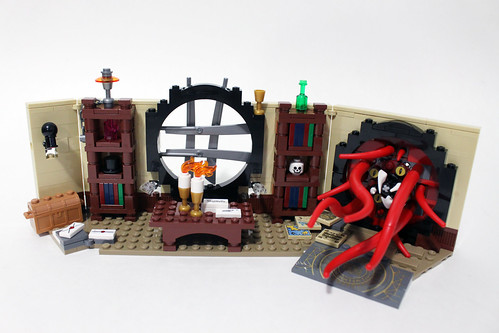 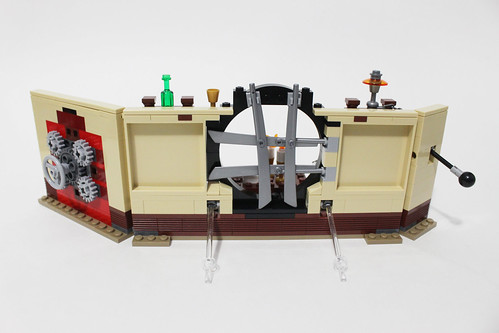 Around the whole head area itself are eight tentacles, four of which are the larger variety with a play feature. By turning the same wheel, the tentacles are able to capture one of the minifigures. This is actually a nice feature that’s very simple to create. 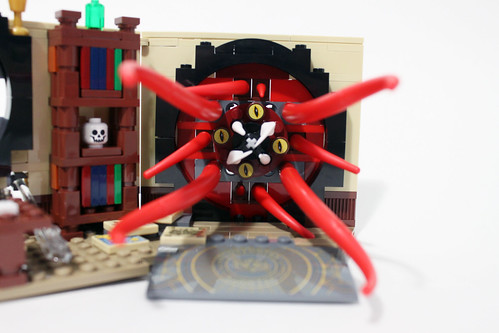 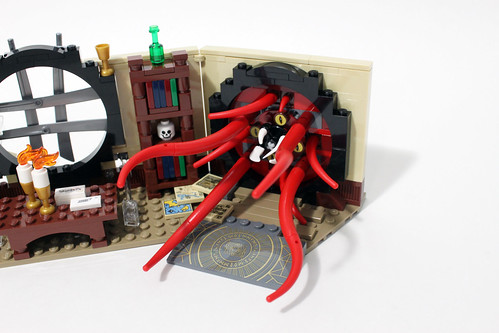 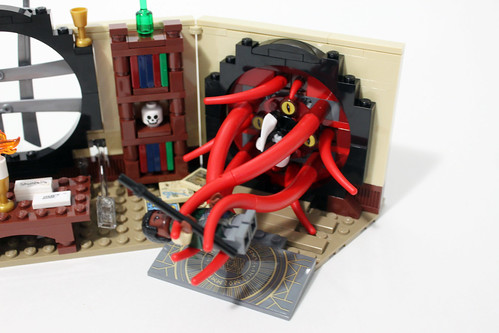 In front of the monster is a stickered ramp with more of the rune words. Next to the monster on the floor are some tiles, mixed with both printed and stickers, with the latter mentioning The Codex Imperium and Book of the Invisible Sun. 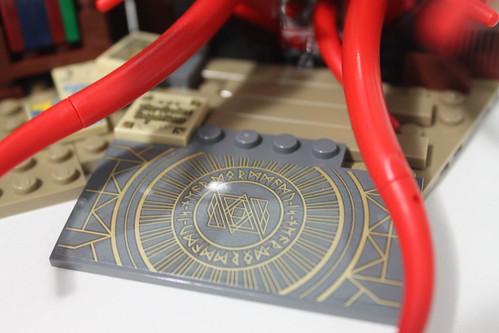 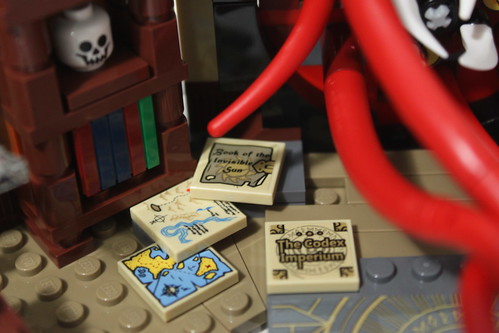 In the larger section of the room, there is a desk filled with with some candles and some more stickered tiles like a letter from Stark Industries and the WiFi password, Shamballa, as well as some candles. To the left of the desk on the floor are some more sticker letter tile pieces. The main thing you see on the back wall of the Sanctum Sanctorum is the iconic circular window design made of four pearl silver swords. On the lower ends of the window are a couple of trans-clear rod pieces to replicate the minifigures levitating in the air. 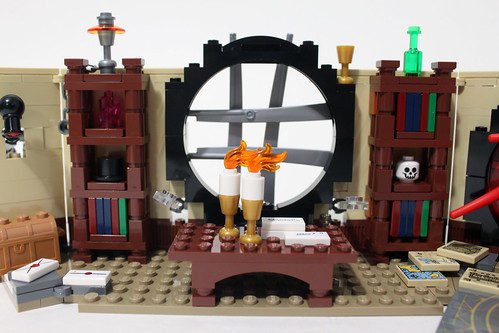 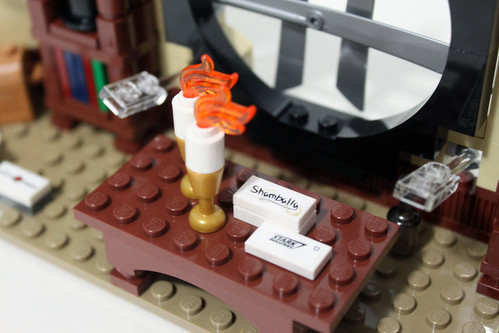 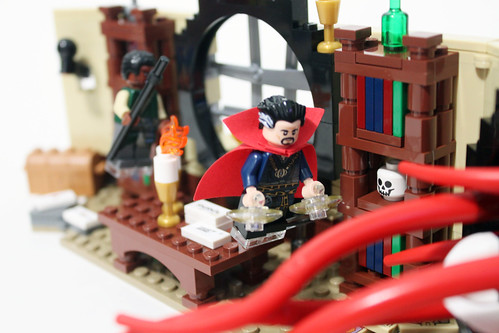 On either side of the window are some bookcases filled with books as well as random mystical artifacts like a skull, a gem, and a top hat. On the left wall, there’s even a spot to place his cape on. I will say that it looks weird without the cape on there as it looks like some floating black orb. 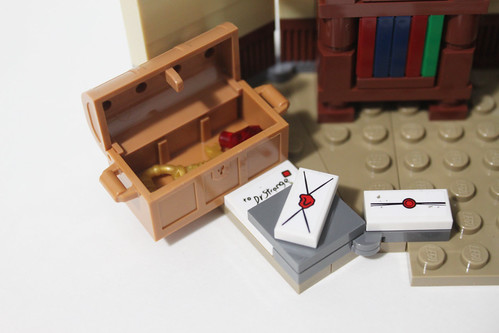 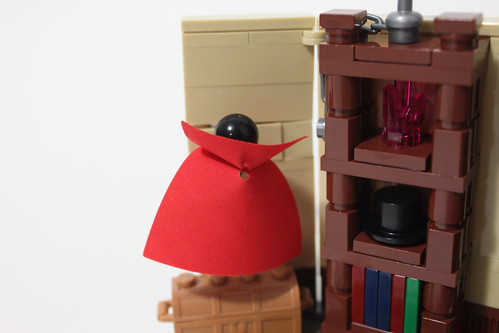 The back side of the Sanctum Sanctorum wall leaves a lot to be desired. On the left, you can see all of the exposed gears and wheel that gives the play feature for the portal beast. On the middle and right sides, you have the protruding rods for the levitating feature and the cape holder.

is an interesting set with both highlights and flaws. The main draw of the set is probably the Doctor Strange and Karl Mordo minifigures. Although Doctor Strange has been part of Marvel Comics for a long time and has even appeared in the Ultimate Spider-Man animated series, he has never appeared as an official LEGO minifigure until this set, albeit the movie version.

The set itself has some neat features like the portal beast and the various Easter eggs inside the room. Even though there are quite a few of stickers for the tile pieces, they do provide some hints of what we can possibly expect to see in the film and are a welcome addition. Also, the Ancient One minifigure has an interesting outfit as it doesn’t match up with what we’ve seen so far in the trailers but that doesn’t mean that she won’t be having it in later on in the movie.

Given all the reasoning, I would highly recommend Doctor Strange’s Sanctum Sanctorum (76060) as it does lots going for it. I have a feeling that it will have the same secondary market effect as some one-off sets like Wolverine’s Chopper Showdown (6866) and the Ant-Man Final Battle (76039) in the near future. The set is currently available only at [email protected] and at Target as it is their exclusive.

Update: I’ve seen the movie and I’ll be adding a little more to this review. There will be some spoilers so don’t open if you haven’t seen Doctor Strange yet.

Spoilers
The movie does not feature any tentacled monster inside the Sanctum Sanctorum. The set may suggest that it’s a mix of both the movie and comics to give more play features similar to the Iron Man vs. The Mandarin: Ultimate Showdown (76008). 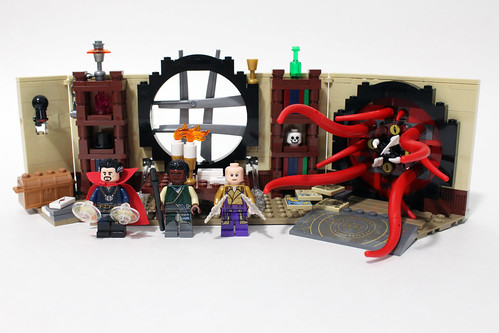