Marvel’s Guardians of the Galaxy was an unexpected box office hit this past summer and one of the most popular characters in the movie was Rocket Raccoon. No doubt that LEGO had to join in on the fun with three sets

In a surprise appearance, Rocket Raccoon also showed up in the 2014 San Diego Comic exclusive Rocket’s Warbird in his maroon colored outfit. Many LEGO fans were outraged because a majority of them couldn’t attend SDCC and wouldn’t be able to get it and for those who did, were beat out by scalpers and didn’t get a chance at them either, like me. When an image of the Rocket Raccoon polybag (5002145) has discovered, people started to wonder how they could obtain it. 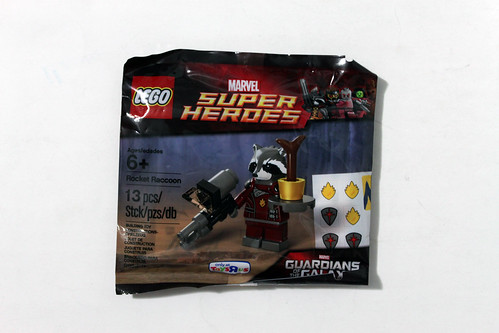 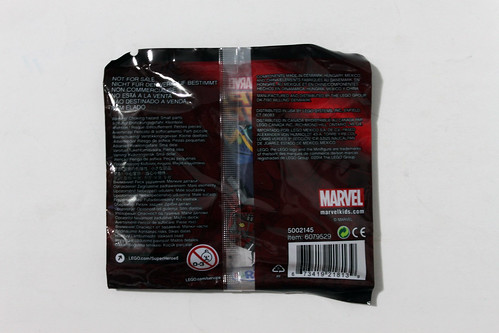 This new polybag is only available at Toys R Us free with purchase of $30 or you can purchase it as a stand-alone polybag for $4.99 each. Some stores had a limit on how many you could buy, some didn’t. It contains only 13 pieces, most of which are buildables that go along with Rocket. 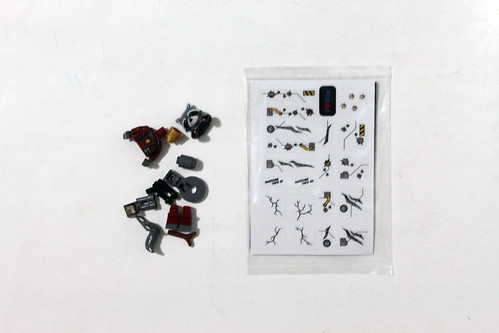 The draw of this polybag is of course Rocket Raccoon himself. It is the same minifigure that was in the SDCC exclusive so it it was great to get it without shelling out a lot of money to buy the Warbird. He wears the Ravagers outfit which is dark red/maroon colored. There is printing on both sides of the torso and legs. There is even printing on the side of the arms and legs as well. The tail is a soft, rubbery piece that fits between the torso and the legs. Rocket’s head is a hard plastic and it has some very nice printing on it. 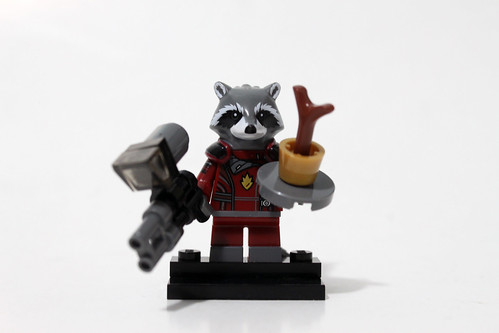 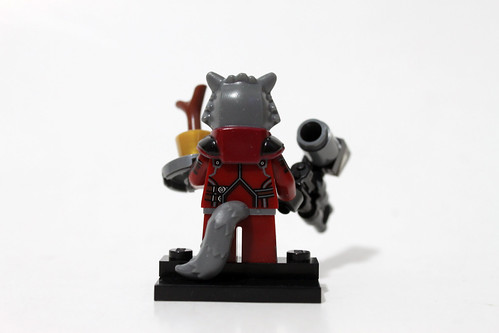 There are actually two builds for the polybag, Rocket’s oversized rifle and the sapling Groot. The rifle is made from the ADU blaster with binoculars on the front and the clipped on scope. Although it is simple to build, it does have some resemblance to his rifle in the movie.

The other part of the build is the Groot sapling. Again, it doesn’t take much to make it look like its movie counterpart. The pot is just a upside-down cone piece or a fez piece as others refer to on a 2×2 round tile with a carrot top in the middle.

In addition, there is also a sticker sheet filled with designs that you can add to the Milano Spaceship

. If you have the set, you may have noticed that it is rather bland. The sticker sheet has 41 decals which you can use to customize the ship to your heart’s desire. There are plenty of stickers to make the Milano look battle damaged like cracked glass, bullet holes. There are also emblems for the Nova Corps that you can use for the Necrocraft in the Starblaster Showdown (76019)

set. What’s nice about the sticker sheet is that it’s also in its own packaging. 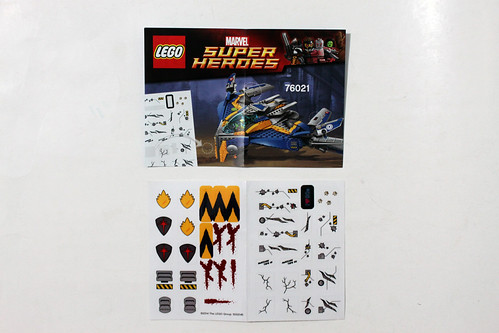 Overall, the Rocket Raccoon polybag (5002145) is an awesome minifigure that helps complete the whole Guardians of the Galaxy team in their ” target=”_blank”gers uniforms. There isn’t much complaint about the minifigure except that Rocket could have some brown coloring in his fur since he is a mix of brown and gray.

The buildable accessories are very on point including the Groot sapling. The sticker sheet is a cool bonus that you can cross use on another set. Again, it is now available at Toys R Us stores in very limited quantities so if you are able to get one, I suggest that you do. If you aren’t able to find any at TRU stores, you can find an abundance of them on the secondary market like eBay

and plus prices on them are dropping since the market has been saturated with it.