Today we are taking a look at a little interesting product that popped up online last year as a Target exclusive. This is the LEGO Minifigure Box Set (5004076) which consists of four different minifigures from different LEGO themes. This little set was part of a Target promotion where you could get it free with a purchase of $50 or you could have just purchased the set outright for $15. 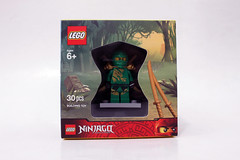 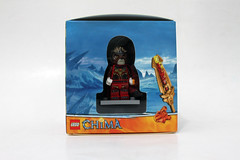 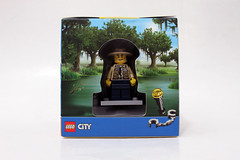 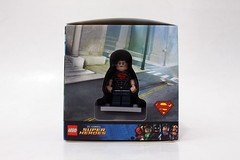 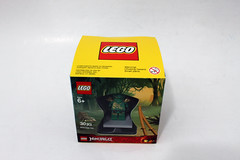 The first thing we can take a look of on the LEGO Minifigures Box Set is the packaging itself. It comes in a fairly small box with clear windows to show each of the minifigures included the set. The printing of each side of the cube corresponds to what type of theme the minifigure is in as well their accessories. Speaking of accessories, they are in the middle of the box in a plastic bag. The inside packaging also has the same background image as the outer minus the banners and accessories shown on the outside box. 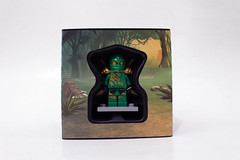 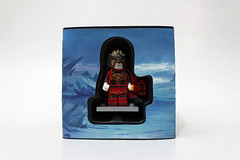 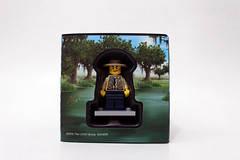 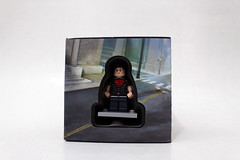 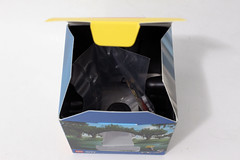 The first minifigure in the LEGO Minifigures Box Set (5004076) is the LEGO Ninjago Lloyd Green Ninja in his Dragon Xtreme (DX) robe. What’s interesting about this new version of Lloyd is that he became the Green Ninja after the other ninjas already had their DX robes a year before. Like with all the DX outfits, you have the Dragon printing on the front of the torso and leg. On the back of his torso, you have some more printing of the Dragon head as well as his name. The face is the same as his previous version with the smirk. The difference is that this one doesn’t have a double-sided head. His accessories include two gold katanas as well as the holder which attaches between his head and torso. 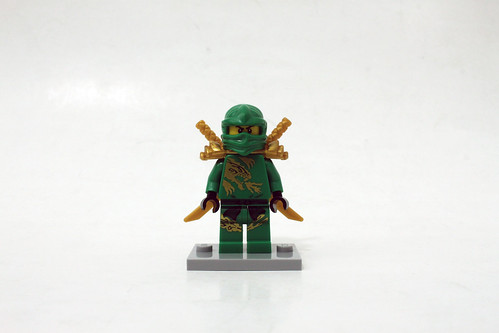 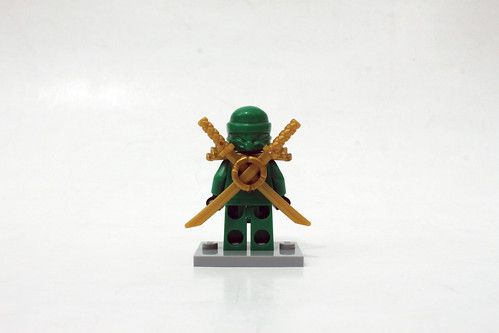 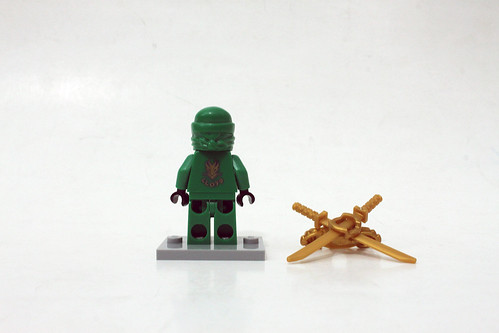 Continuing to the right of the box, we have the LEGO Legends of Chima Fire CHI Lavertus minifigure. This version of Lavertus is also an exclusive to the box since he has not appeared before in a set. The torso and the legs are exclusive to this box set but the headpiece have been used before previously. His accessories include a Fire CHI piece as well as a fire sword. Lavertus also wears a cape and there have been many reports that they become crumpled in the packaging including the one I have. 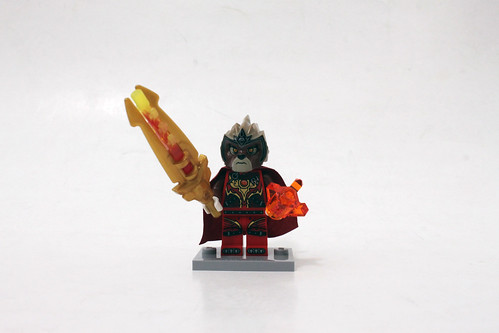 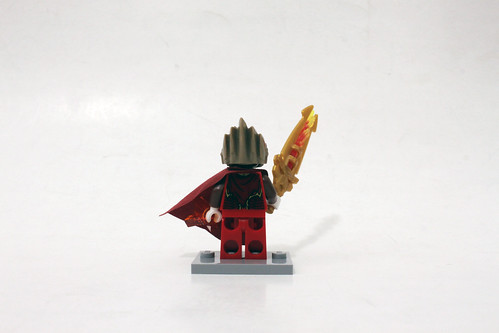 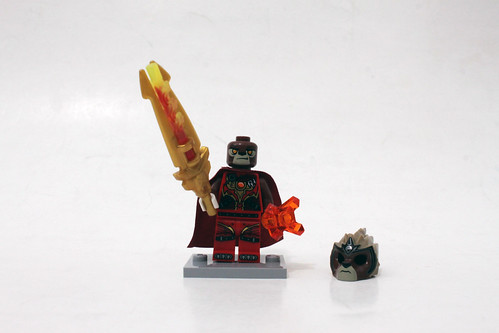 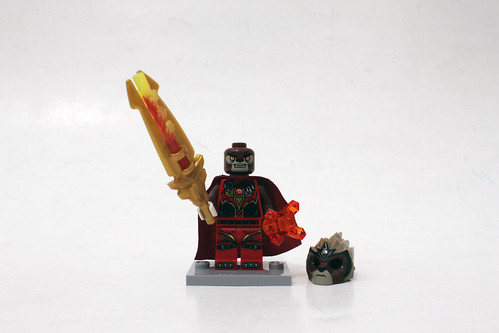 The next minifigure is a LEGO City Swamp Policeman. Although there are other Swamp Policemen that will be introduced in the 2015 wave of LEGO City sets, this one is also limited to this set. His accessories include a pair of handcuffs and a flashlight torch. Both the head and the torso has only appeared in this set, as of this writing. Who knows if he will be included in future sets. 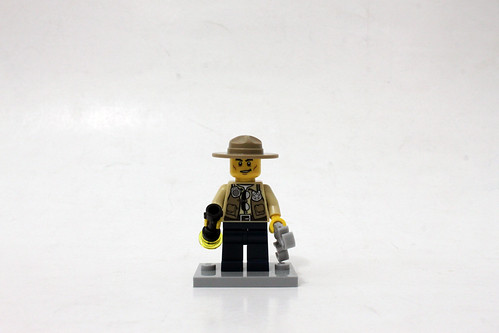 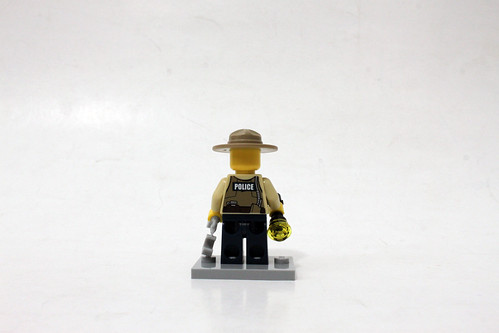 The final minifigure in the LEGO Minifigure Box Set (5004076) is Superboy. He is a completely new character and is probably the main draw of many collectors since he has never appeared in an official set. Superboy is in flesh color like many others in the DC Universe/Comics but he has the new short sleeve printing that first showed up in the LEGO The Simpsons minifigures. He also has some new jeans printing as well. He has a double sided head with a stern look on one side and an angry look with glowing red eyes on the other. One issue that from what I’ve heard, Superboy has is some sloppy sleeve printing on one of the arms. Fortunately, my copy did not have this issue. 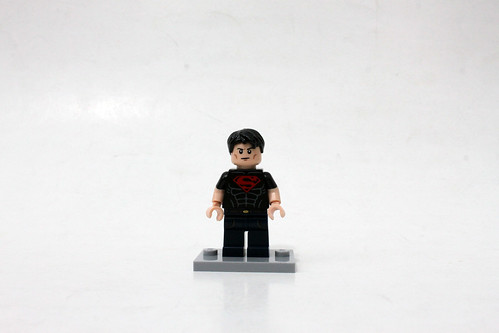 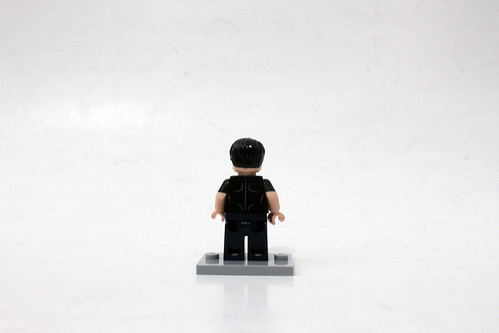 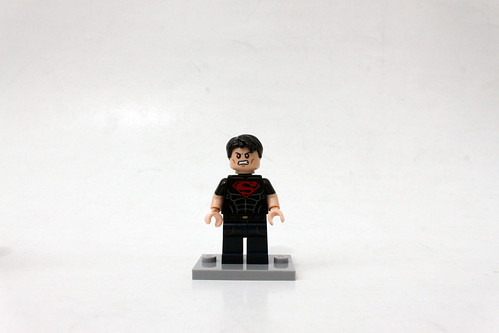 Although I did not get to see the LEGO Minifigure Box Set (5004076) in person before I purchased it online, it is fairly smaller than I expected. What’s nice about the box is that you get four different minifigures from different LEGO themes. For only $15, that’s a really good deal considering all the exclusive minifigures you get. One thing I didn’t note yet is that the minifigures themselves are on a light bluish gray stand which is pretty rare coming in two other sets, the LEGO Star Wars AT-AT (75054)

If you missed out on them, they are available on Bricklink as well as on eBay

. If you do purchase from those place, make sure you read the listings because some of them might not include all four minifigures.

Finally, stay tuned as there is another LEGO Minifigure Box Set (5004077) that has been spotted and I’m going to assume that it is a Target exclusive as well. We’ll have a review of the new box once it is available. 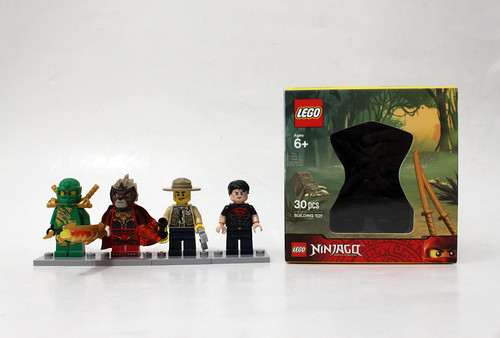