Back in December of last year, we reported that Ninjago will be coming back in 2014 after a year off when the tv series ended. Kockamania is reporting that Ninjago may be coming back sooner than expected, as soon as December of this year. They also list a number of sets that will be released in that wave in Hungarian language. The sets listed are not the final names but are just translated into English. From the preview image above, you can see that Zane is more robotic looking so there’s rumors that the next wave of sets will be more mechanical and more robotic looking. If this information is true, what do you think of these sets just from their names? 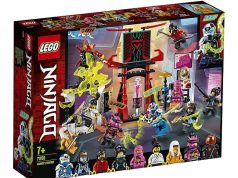