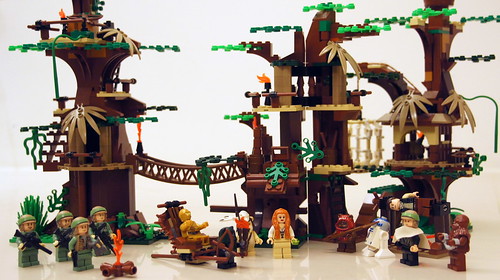 Flickr member, mexxbear, has posted an image of what could be the long rumored LEGO Star Wars Ewok Village (10236). Hoth Bricks is reporting that GRogall has seen it and even has a price of € 249.99 for the set. There’s no “official” statement or images yet for the Ewok Village but it won’t be long until that news is uncovered by the LEGO community. From what we can see in the image, there are four Rebel Troopers, C-3P0, three Ewoks, Princess Leia, Han Solo, Luke Skywalker, R2-D2, and Chewbacca. The set itself is somewhat similar to the Ewok Attack (7956) from a couple of years ago. The set depicts the scene in Episode VI: Return of the Jedi where the heroes are captured by the Ewoks on the forest moon of Endor. If this is the real set that will be released, what do you think of it and will you be picking it up?

Update: mexxbear has confirmed that the image above is indeed a MOC. After seeing the MOC and what the official set could look like, the wait of seeing the real set is even more excruciating since we’ve been waiting so long for a set like this. Hopefully we’ll get to see it soon.

Update 2: The set has been officially announced.