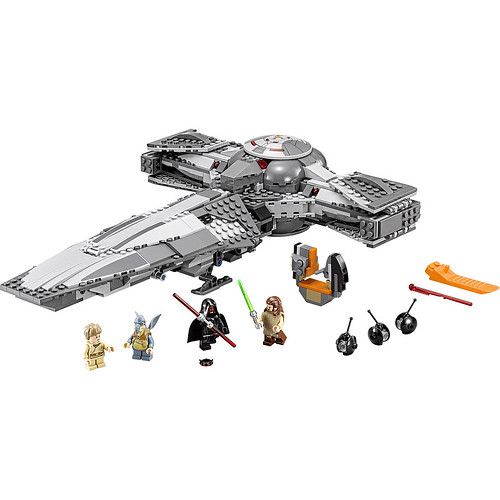 Nokturn on Eurobricks has posted the official image of the upcoming LEGO Star Wars Sith Infiltrator (75096) that will be released in August. As I mentioned in my previous post, the set will have 660 pieces and retail for 99.99 Euros. The minifigures that will be included in the set are Darth Maul, Watto, Anakin Skywalker, and Qui-Gon Jinn. R2-D2 was also rumored to be in the set but it’s been left off. We also get three DRK-1 Dark Eye Probe Droids and Darth Maul’s Bloodfin speeder.

As you can see, the new Sith Infiltrator (75096) is slightly updated from the previous 7961 set such as the front end of the ship having more sloped pieces. Also notice the Qui-Gon Jinn minifigure is now wearing a poncho piece for his Mos Espa version.

What do you guys think of the new LEGO Star Wars Sith Infiltrator (75096)?