LEGO has released a video showcasing some of the features for the LEGO Technic Fast & Furious Dom’s Dodge Charger (42111). The main thing is the V8 engine that sticks out of the hood and it even has moving pistons. In addition, there is steering included for the front wheels which is always a plus. To give the Charger a more authentic feel, LEGO also gave it a wishbone suspension. Lastly for more of a display feature, it does have a pop out beams on the bottom of the car to recreate the last racing scene from the first film.

Dom’s Dodge Charger will be available on April 27 but you can pre-order it on LEGO [email protected] today. It has 1,077 pieces and retails for $99.99. 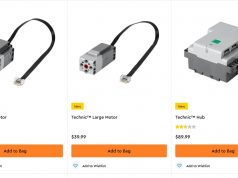