One iconic scene in The Lord of the Rings: Fellowship of the Ring takes place at the home of the Elves at Rivendell. The Council of Elrond (79006) set recreates the scene in the movie where the Council discusses what to do with the One Ring. The scene also is the origin of one of the best memes created. This set contains 243 pieces and retails for $29.99 which comes out to about $0.12/piece. The box contains two numbered bags, one instruction booklet, and one small sticker sheet. 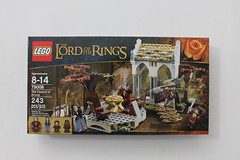 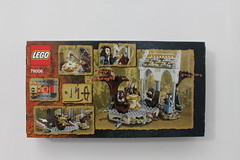 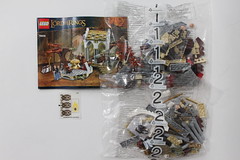 There are four minifigures in The Council of Elrond set: Elrond, Arwen, Frodo Baggins, and Gimli. Elrond is the Lord of Rivendell and is the one who called the secret council of who it’s named after. He is a different version from the one that was given out in the polybag from last year for the LEGO Lord of the Rings video game. In this version, he wears a dark red robe-type outfit that goes down to his legs. The torso has shows him wearing a shiny gold shirt with some brownish silver embroidery patterns. The back of the torso also has more of the patterns. He has a double-sided head with a content expression on one side and a stern expression on the other. The faces also shows off some of his wrinkles and his memorable brown eyebrows. His brown hairpiece is braided and also includes the Elven ears and his silver Elven Whisper circlet headpiece. Elrond also wears a double-colored cape with the red side on the outside and the yellowish-tan on the inside. One thing I didn’t like about the hairpiece is that it pinches the cape. 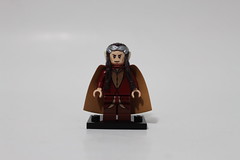 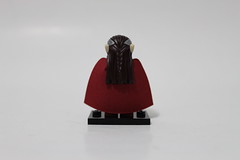 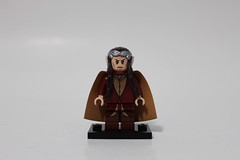 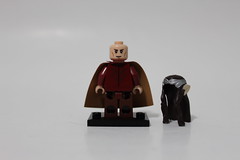 The second minifigure in the set is Elrond’s daughter, Arwen. She wears a very nice blue dress with frills on the sloped dress piece. Her torso piece has some purple ribbon printing that is tied from the back. The sloped piece also has some of the purple ribbon printing. He has a double-sided head with a content expression on one side and an irritated look on the other. Her hairpiece is similar to Elrond’s but is a bit darker brown. It also shows off the Elven ears. Arwen’s accessory is a long bow with arrow. 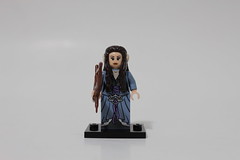 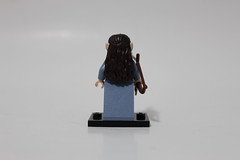 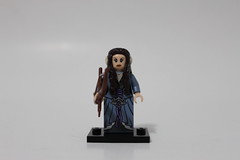 The third minifigure in the set is Frodo Baggins. The torso and legs for Frodo are the same as the one in the Shelob Attacks (9490) and Attack on Weathertop (9472) sets. He wears a brown jacket over a red waistcoat. As a Hobbit, he has the short brown legs. One thing that is different from other versions is his head. He has a double-sided face with a worried look on side and an angry look on the other. Frodo has the same hairpiece as the other versions. 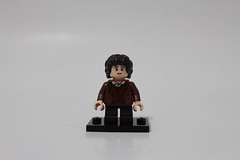 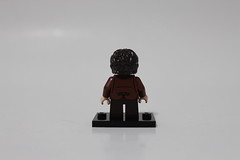 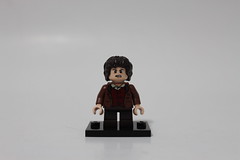 Gimli is the same minifigure as in all the other sets he’s been in. His torso is red shirt with brown scale-like straps on both sides of the torso. He has a golden belt printing as well. Gimli has a double-sided head with a serious expression on one side and and angry expression on the other. His beard mold shows two braids going down the front and one in the back. With the beard piece on, his expressions are almost unnoticeable maybe except for his eyebrows. His helmet is dark brown with patterns all around. His accessory is his signature axe. 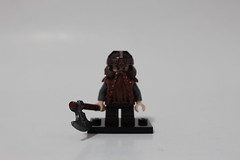 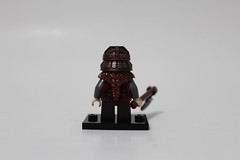 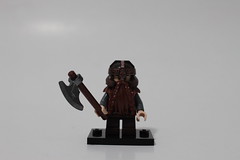 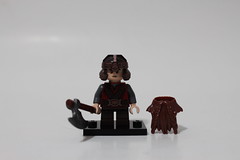 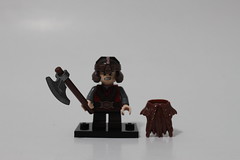 The Council of Elrond is split into two areas, the meeting area and and entrance way with a small weapons rack which are connected modularly. Both areas of the set have the feel of Autumn and Rivendell all over. In the meeting area, there are three swivel chairs for the members of the Council, Elrond, Gimli, and Frodo. The backs of the chairs are stickered to give the chairs decorations. In the center of the chairs is a pedestal which the One Ring sits on top of. Next to the pedestal is a platform in which Gimli stands on when he attempts to destroy the One Ring with his axes but fails and flies off. To recreate that, there is a lever that you push and the platform flips over. This also shows Frodo’s vision of the Eye of Sauron. There is also a fairly large tree with a couple of orange leaf pieces and an olive green leaf piece. This area sits on a grey platform in which there are a couple more green leaf pieces coming out from the sides.

The other area of the Council of Elrond set is an entrance walkway with a couple of nice looking white arches that sit under rounded grey pillars. The arches are a simple yet effective build that brings out the essence of Rivendell. Under one of the arches is a weapons rack that holds a golden Elven sword and Frodo’s sword, Sting. Heading to the upper part of the area, you have a sloped roof that uses some different colored cheese slopes that act as shingles. I really like the use of the white horizontal snap bricks to achieve the look of the roof. On either side of the roof are a couple of microfigures that act as statues. To the right is another tree with brown and olive green leaves. There are also a set of curved stairs that go up to the area. 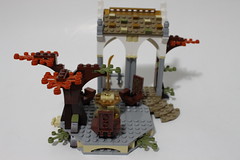 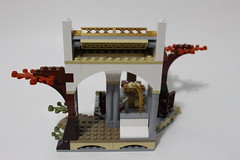 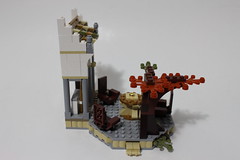 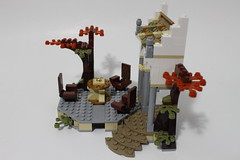 As a whole, I really like the look and feel of The Council of Elrond set. The colors that were used are excellent and it makes the set stand out. The minifigures that were included were great choices but I’m wondering why LEGO did not include Boromir as he did have one of the best lines from the movie. One downside of the set is that it is far too small to give the scene justice. There were 22 members present in the movie and the set only has three seats which is a huge difference. Besides that one issue, I still think The Council of Elrond is good set to pick up especially for any Lord of the Rings fans. 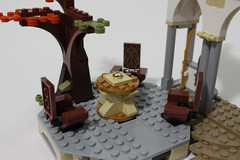 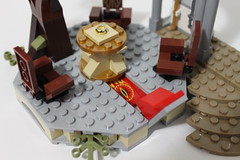 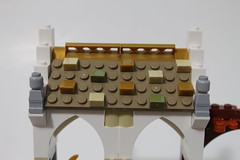 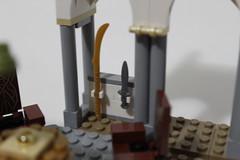 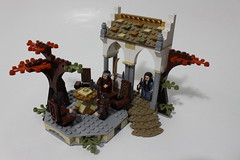 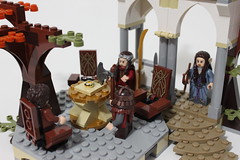 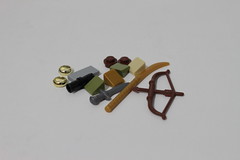