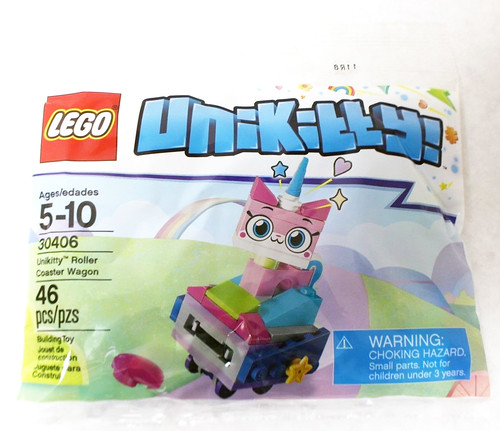 Late last month, the official images of the LEGO Unikitty sets started appearing online along with the Collectible Figure blind bags which are slated to come out later this summer. There’s now also news of a polybag for the theme which has started to hit LEGOLAND and LEGOLAND Discovery Centers as well as on eBay called the Unikitty Roller Coaster Wagon (30406).

It has 46 pieces and includes the most basic variant of Unikitty. What’s interesting here is that Unikitty uses a new reverse 1×3 plate for the neck that connects to a pin to give the head more stability unlike the original Unikitty from The LEGO Movie line. You can check out a review of the polybag from Just2Good below. There’s no word on a wider availability at this time as LEGOLAND usually sells polybags before other retailers but I’ll keep you updated.