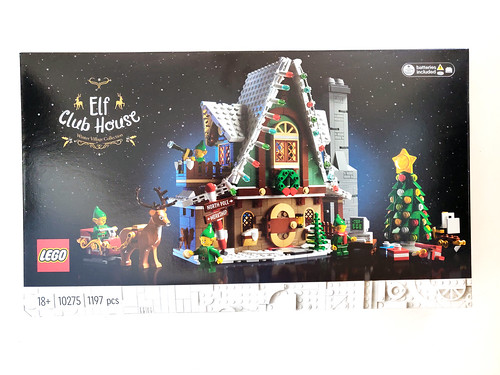 The LEGO Winter Village theme continues this year but in a slightly different way with the Elf Club House (10275). The set has 1,197 pieces and retails for $99.99. The contents of the box include 11 bags numbered to 5 along with the two instruction booklets packaged with the small sticker sheet.

With the Winter Village sets, we usually get very festive box arts but this year’s entry has been changed to the 18+ sets which has a darker background while featuring the set. I’m not sure if this was a good idea since many families build these sets together and it may be skipped over when looking at it in stores. Obviously, purchasing it online is different because you know what you want but it just looks off without all the bright colors on the box. 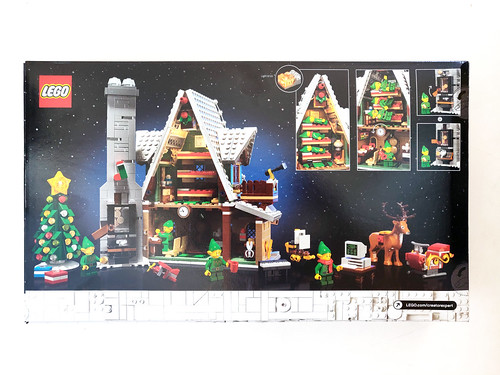 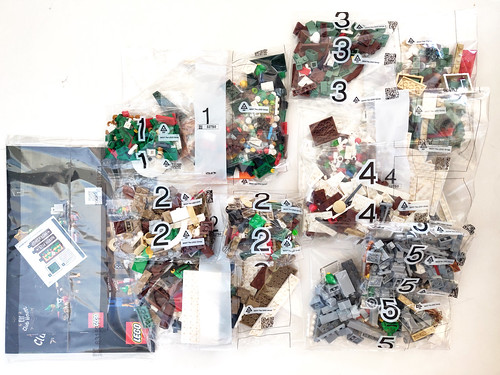 There are four minifigures in this set which are the four elves. Each of the elves have the same outfit which is new for this set and each of them have something unique about them as well. First is the plain girl elf that has a double-sided head showing a happy expression. The other girl elf has on a red scarf and she has freckles on her face. 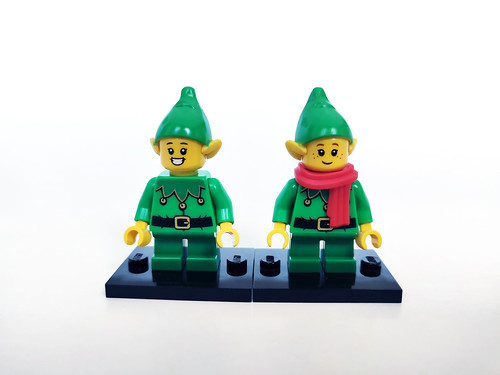 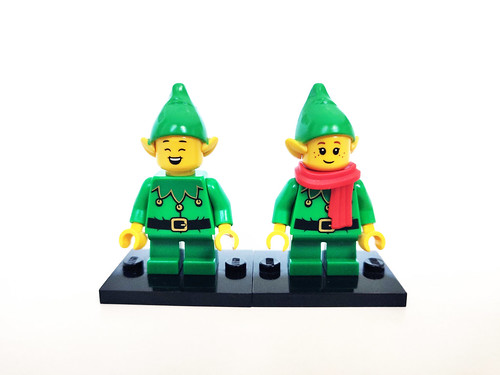 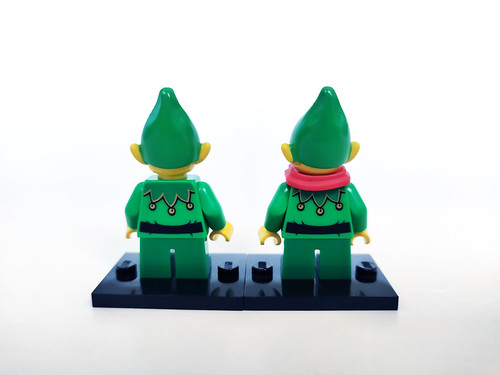 One of the boy elf has on glasses with a happy expression while the other has a microphone as an accessory and his double-sided head shows him with a mischievous grin and an anxious look on the other. 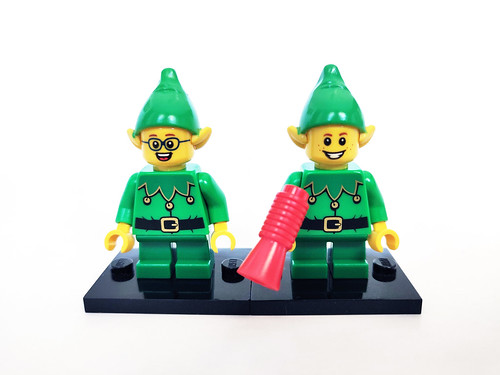 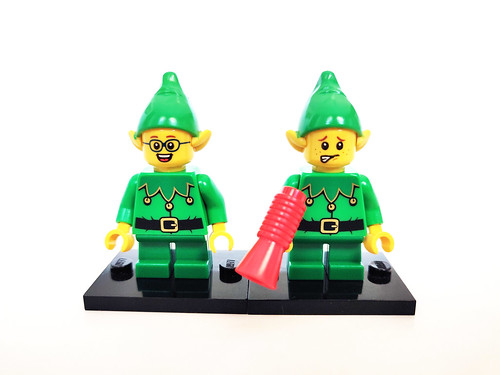 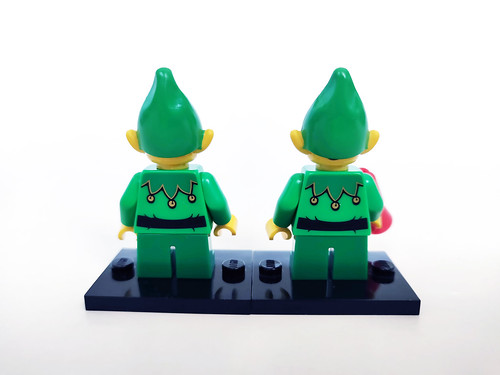 The reindeer looks really nice with the brown finish with white hair on the chest. The antlers are rubbery which is interesting but they look good overall. Attached to it is a decently designed sleigh for its size. What’s funny about it is that it is equipped with some rocket boosters on the back which kind of reminds me of the one from Elf. 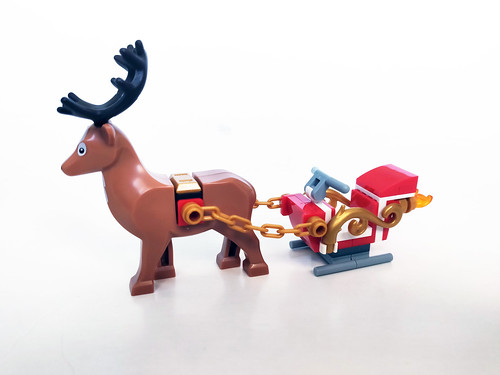 There are some small builds that are in this set which include a piano, a pirate ship, and an airplace. LEGO designer Chris McVeigh also manages to throw in a brick-built computer which he was known for before working for LEGO. Unfortunately, the monitor is not printed but has a sticker for Santa’s Nice List. 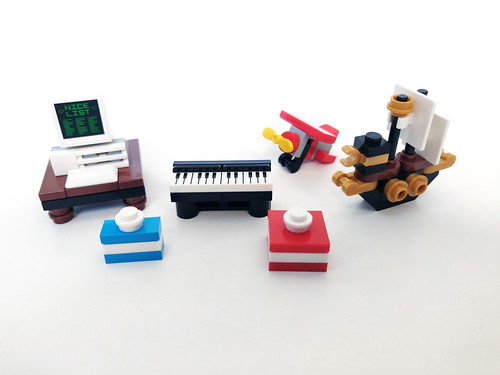 Another smaller build is the Christmas tree that is a new design that we haven’t seen before. There has been a number of tree designs over the years and this one is very impressive using 1×2 slopes for the leaves. There are also a lot of colored 1×1 round plates used for the lights as well as the star from The LEGO Movie 2 on the top. The white dish for the base completes the look. 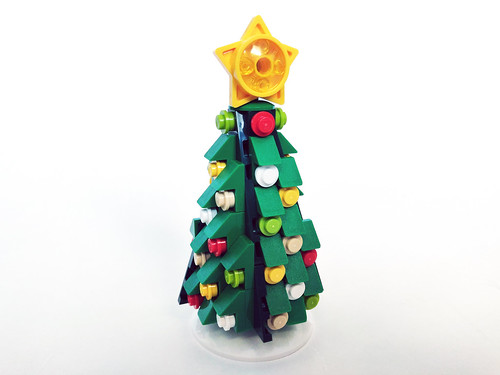 On to the Elf Club House itself, the overall look of it is similar to previous buildings in the Winter Village line. It has very sharp roof slopes which somewhat makes it look similar to the Gingerbread House (10267) from last year. 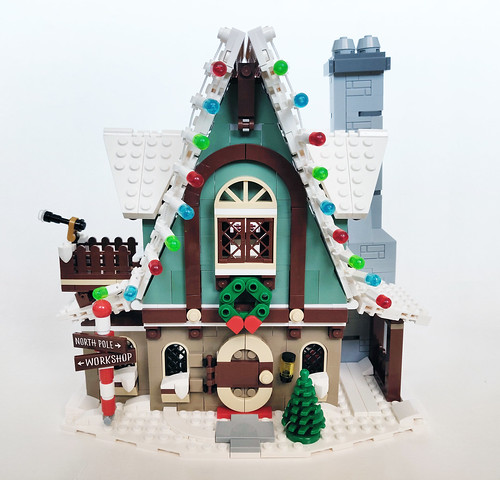 The front of it is heavily decorated starting with the Christmas lights that are hung on the edges of the roof. There are some trans-green, trans-blue, and trans-red bulbs that are nicely arranged and they were a pain to get on correctly at the right angle, at least for me. Above the rounded door is a wreath made mostly using 1×2 rounded plates which Chris mentioned is his favorite building technique for this set. 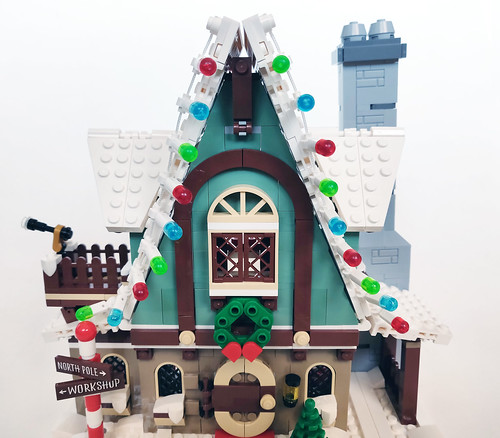 The windows on either side of the door have some snow on it and it’s a subtle detail that I like. On the left side, there’s a sign pointing to the North Pole as well as to the Workshop which is a nod to Santa’s Workshop (10245) and that kind of further confirms that all of these Winter Village sets are connected to each other. 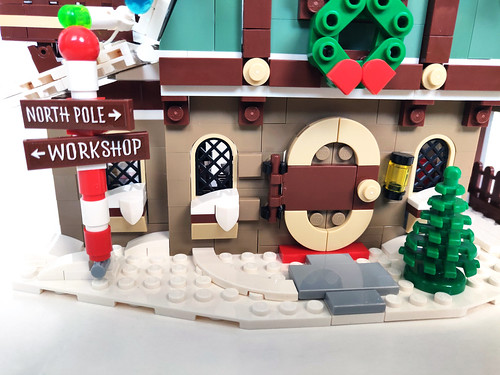 The left side of the house has a spot for a pair of shoeshoes that are pegged against the wall. Above that is the balcony where there’s a telescope is at. One little funny detail is that there’s no door to go out to the balcony so the elves will have to climb out the window to get to it. I’m not sure if that was intentional or something that was overlooked during the design phase. 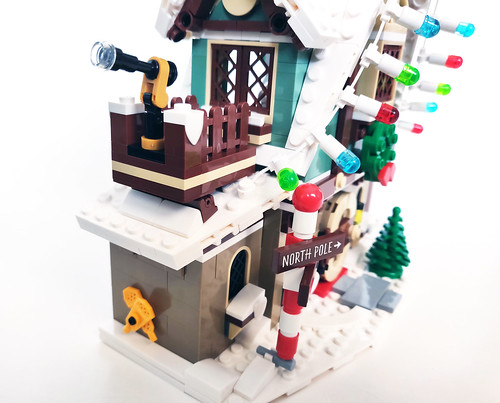 On the right side of the house, there’s a little sleighport as LEGO calls it. It’s basically a small area made out of 1×8 tiles to allow the reindeer and sleigh to park there. 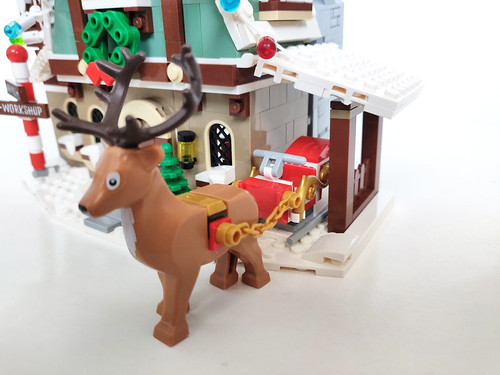 On to the backside of the club house where there is a ton of detail packed into it. Let’s start at the gray chimney that is attached to the house using some hinges. In the middle of it, there’s a cute little red and green stocking hanging above the waffle maker. As for the waffle maker itself, it has a very fun feature here that you can drop some waffle tiles on to the frying pan below by turning the lever on the left. You can also flip the pan forward to get the waffles off the pan. 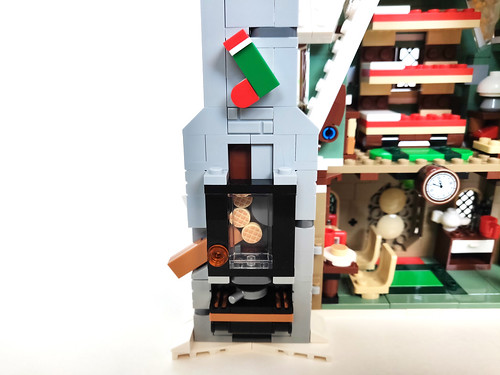 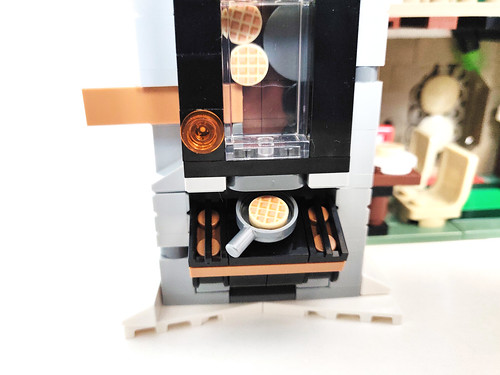 Inside the house, the top floor is the elf sleeping area with the triple bed. By turning the clock below, you can flip the elves off the beds to start their day. I’m not sure if this is the idea of the head elf or Santa but these sleeping conditions don’t seem to be very nice. The rest of the room has a cabinet on one side and a lamp on a table on the other. The chair next to the lamp seems to be awkwardly placed. There’s also a printed calendar tile right above the beds with Christmas Eve circled signaling their deadline to finish building the toys. 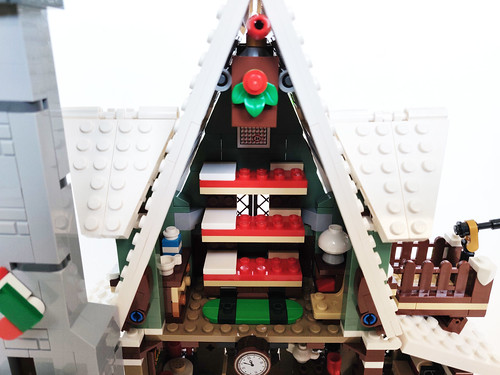 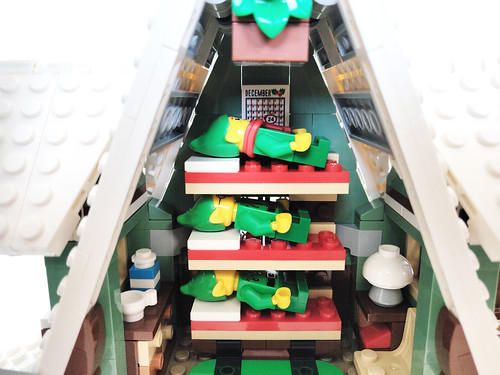 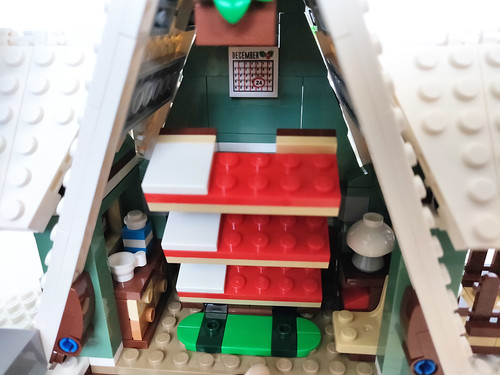 Another feature here is the hidden light that you turn on by pushing down on the lever right above the holly. I don’t think this feature was needed by it does continue the tradition of having some light in the Winter Village sets. The only bad thing is that you can barely see the light when looking at it from the front. 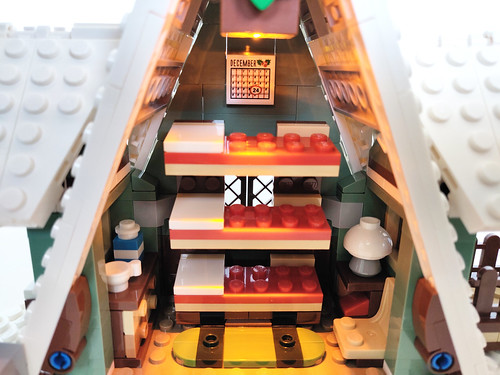 The first floor is a little bigger and main thing you see is the dinner table on one side. I like the sticker of the elves taking a picture with Santa hanging right above it. 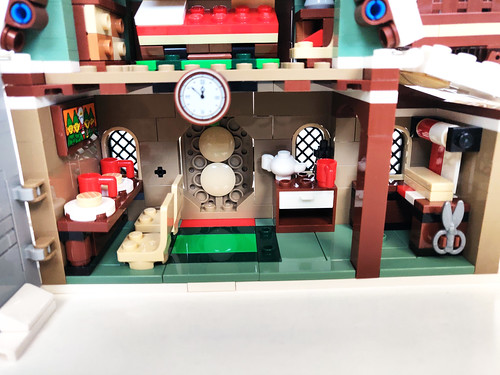 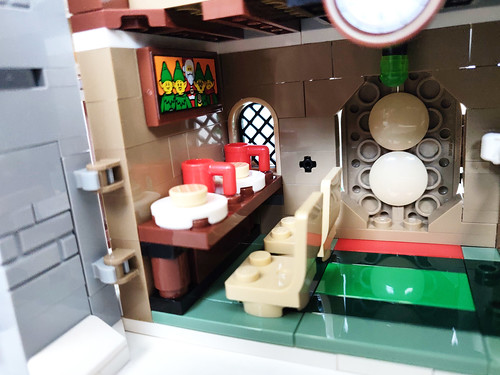 On the other side is a little crafting station where the elves are wrapping up presents. There is a roll of red and white wrapping paper that hangs on the wall and they actually use some doors to achieve the look. That’s some great use of parts right there. At the end of the table, there’s a pair of scissors that hang off it. 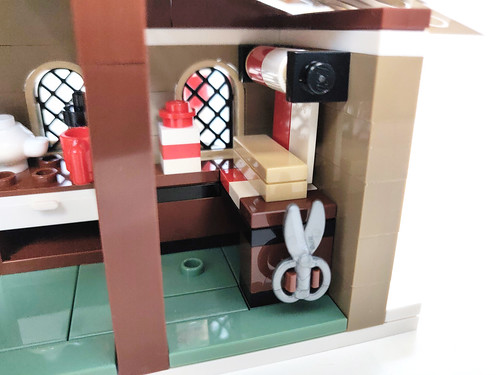 Although the Elf Club House (10275) looks similar to the Gingerbread House from last year, it looks decent for Chris’ first entry in the Winter Village subtheme. There are some really good looking areas around the house that I like including the waffle maker/chimney and the wrapping paper area. The decorations in front of the house are done nicely as well. The large Christmas tree is also something that I found well done.

The shaking bed feature is passable but the light is underwhelming since you can’t really see it from the front. The price is somewhat more expensive than what it looks like. This is probably due to some of the larger pieces in the set including the reindeer. The little builds are decent throw-ins but are necessarily needed. 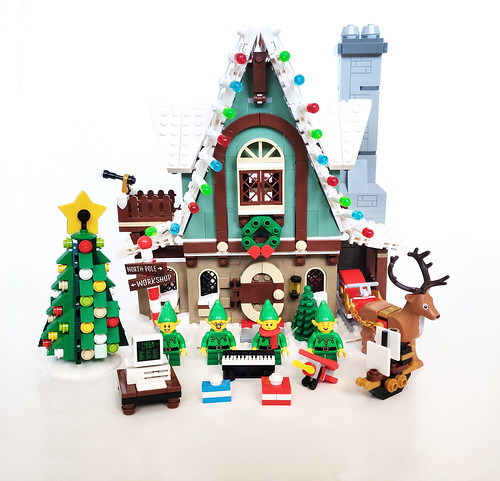