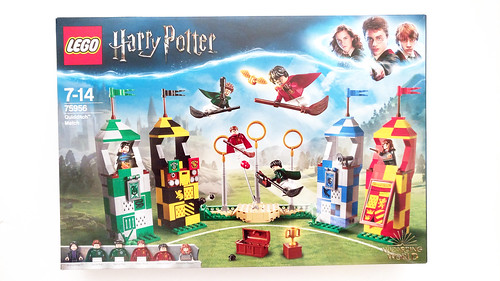 Continuing with my reviews of the revived LEGO Wizarding World Harry Potter sets, the next set I’ll be taking a look at is the Quidditch Match (75956). It consists of 500 pieces and retails for $39.99. The set looks similar to its previous iterations but this one takes elements from the other ones and combine them into one larger set. I believe this set is based on both the Sorcerer’s Stone and Prisoner of Azkaban and you’ll see why throughout the review. 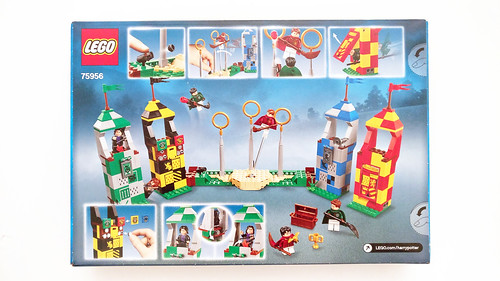 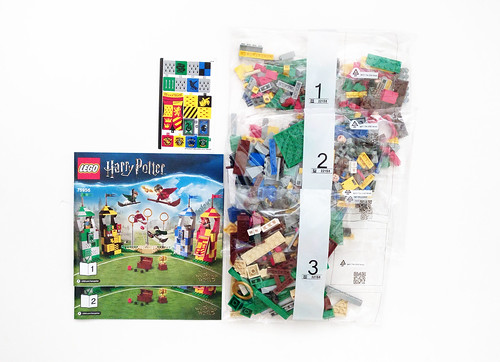 Harry has on the red and gold Gryffindor uniform with the crest printed on the front. He has a double-sided head with a confident expression on one side and a scared look on the other. His accessories include a brown broom and the Golden Snitch. 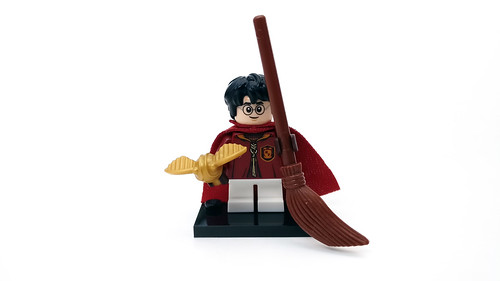 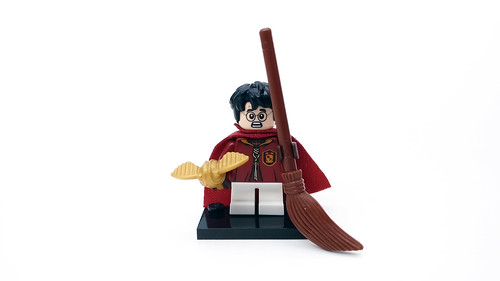 Oliver Wood pretty much has the same uniform as Harry except that he has longer legs. He only has a single-sided head with a confident expression. His accessory is also a brown broomstick. 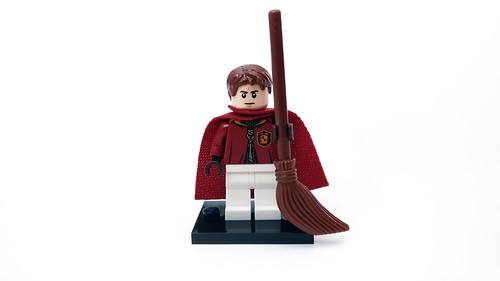 Marcus Flint was the Chaser of the Slytherin team and he has on the dark green uniform with the Slytherin crest printed on the front of the torso. He does have a double-sided head one of which shows his two front teeth and the other showing a scared expression. His accessory includes a black broom with a stud-shooter attached to launch a red Quaffle through the hoops. 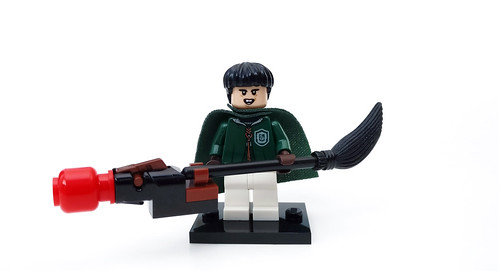 The other Slytherin player is Lucian Bole who was the Beater on the team. He has barely show in the movie but he has the same uniform as Flint and he only has a single-sided head. This particular head is acutally a pretty rare one. His accessories include a black broom and the Beater’s bat which is made up of a telescope piece and a light bulb piece. 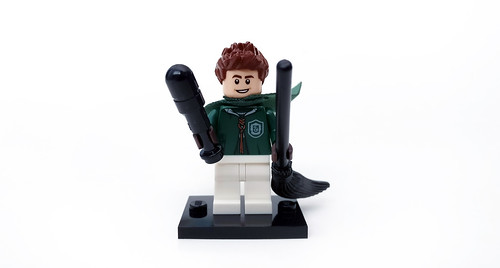 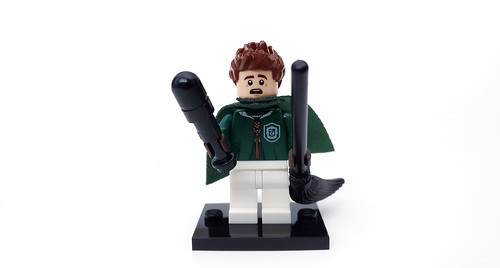 Severus Snape has on a purple shirt with a black jacket but I wish he had robes to match up with the scene. He does have a double-sided head with a grumpy look on one side and an angry look on the other. His accessory is a black wand. 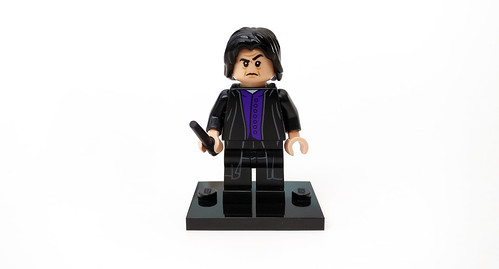 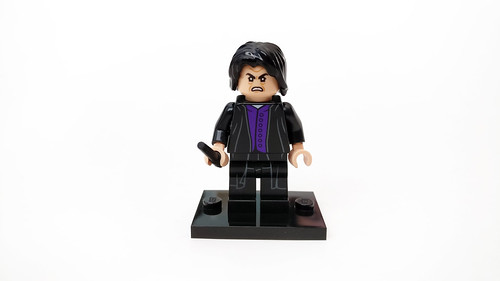 Lastly we have Hermione who has on a gray sweater and short legs. She has a double-sided head with a smile on one side and a scared expression on the other. Her hair piece is nice and looks good compared to her bushy hairstyle as seen in the movies. Her accessory is a tan wand. 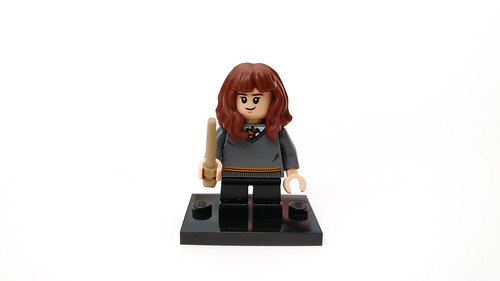 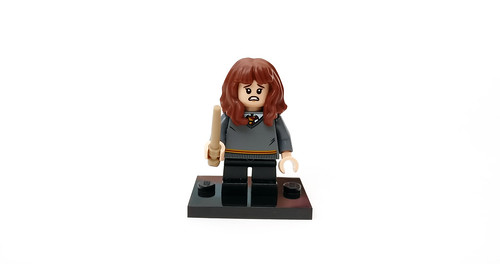 The main parts of the build are the four spectator towers that are color coordinated to each of the four houses of Hogwarts. The towers are built similarly but with slight differences to them however they all have some 1×2 Technic bricks at the base to connect them to the middle goalpost area.

The Gryffindor tower has a red and yellow color scheme that also has a swinging hatch which is just a window pane that has a large decorative sticker. This tower, like with the others, only has enough space to stand one minifigure. 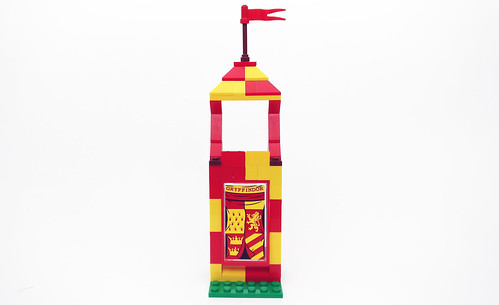 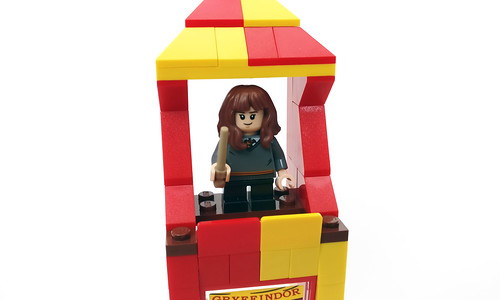 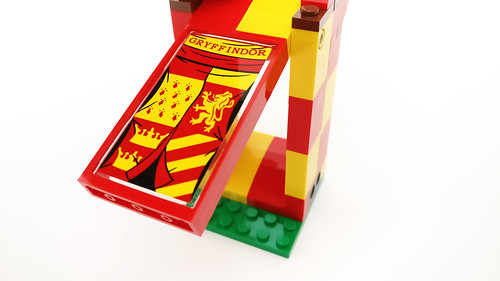 For the Slytherin tower, their color scheme is green and gray. Hanging down the front is a snake flag that says “Go Slytherin.” It’s main feature is the small fire that you can activate by turning the Technic gear on the back. This scene is taken from the Sorcerer’s Stone where Hermione sets fire to Snape’s robes during the Harry’s Quidditch match. 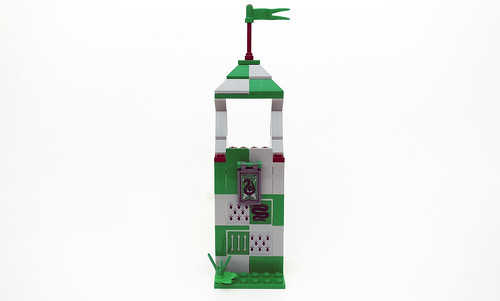 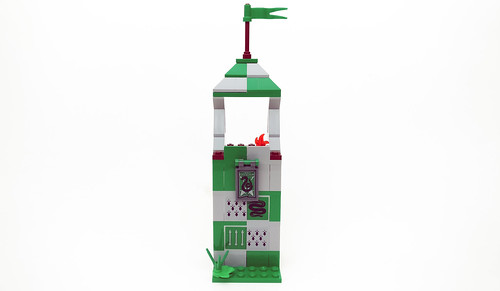 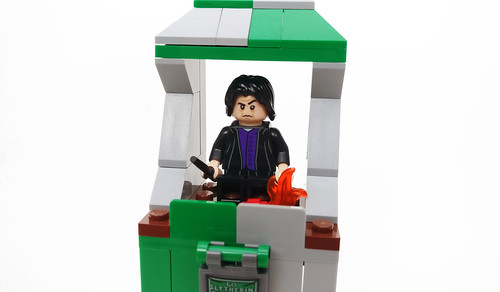 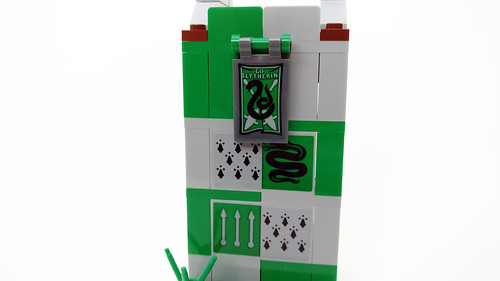 The Ravenclaw tower is probably the most bland of all the four towers. It is blue and gray and the feature here is the removeable microphone. Going down the front of the tower is a flag featuring an eagle for the house animal. 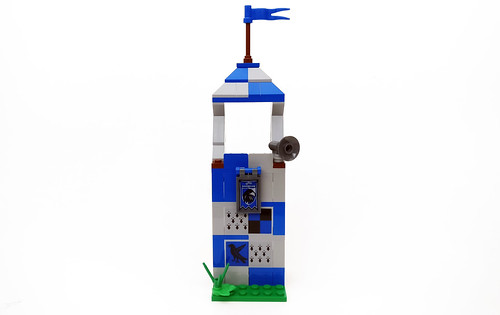 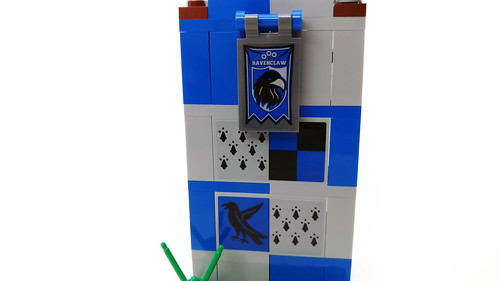 Lastly, we have the Hufflepuff tower that is black and yellow. This tower has the most detail on it with the scoreboard on the front. There are 1×1 round tiles used for the non-accurate points system and any extras are stored in the box. This part of the build also includes 2×2 stickered tiles of each of the four houses to distinguish them on top of the scoreboard. 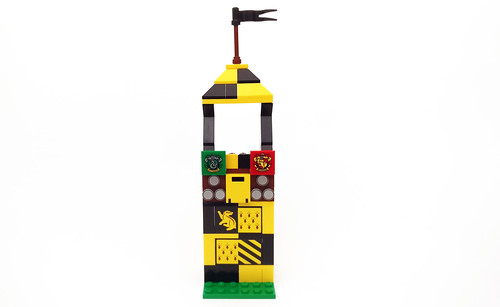 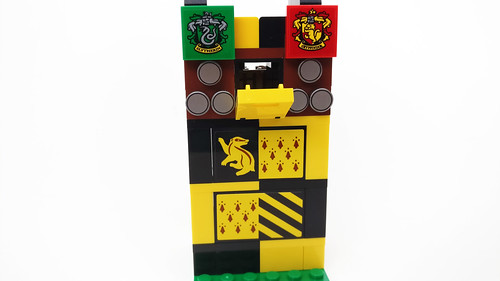 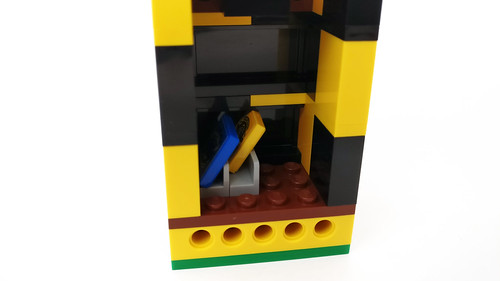 The second instruction booklet, lets you build the Quidditch Cup stand along with a treasure chest that stores the Quaffle. The rest of the parts are used to build the goalposts. Like in the movies, the goals are set at different heights and right in the middle in the front is the goalkeeper function. Attach a minifigure on the trans-clear headlight bricks and turn the dial on the back to make them block incoming shots. I will note that the goalposts will tend to get knocked off simply because they are attached to only one stud. At the grassy part of the left goalpost, there’s a stud-shooter to shoot a Bludger at an unsuspecting player. 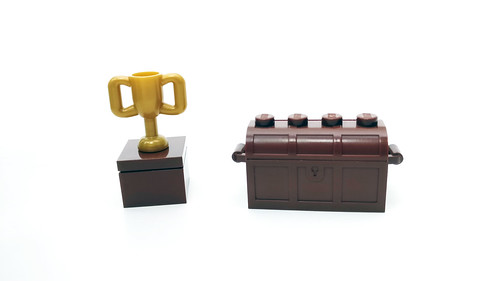 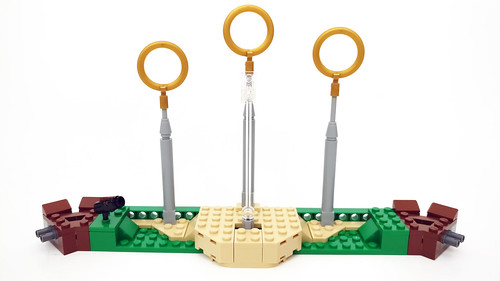 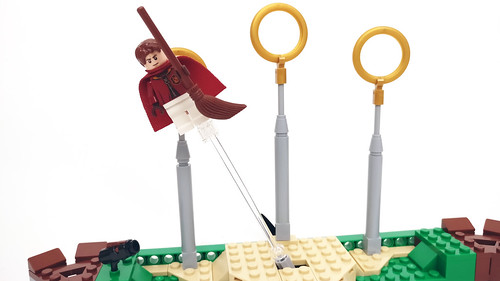 The ends of each side of the goalpost section includes some Technic pins to connect to the towers in any order you desire. This gives you the option of pitting any two houses against each other although we mostly just see Gryffindor and Slytherin in the movies. 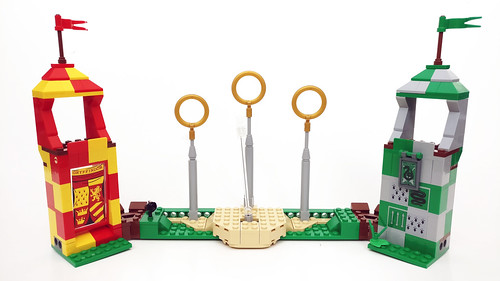 The updated LEGO Wizarding World Harry Potter Quidditch Match (75956) is a fun set with a decent amount of playabiliity. The build is kind of bland due to the towers having similar styles with minor differences between the four. Acquiring a second set would allow you to create a complete Quidditch pitch if you choose to do so. The minifigure selection is good as you wouldn’t normally see some of the characters in other sets. One thing that I don’t really like about the set are the goal posts. They are very flimsy and can get knocked off rather easily.

If you’re a new collector of the LEGO Harry Potter line, this is a good set that encompasses some new features along with some from previous sets. 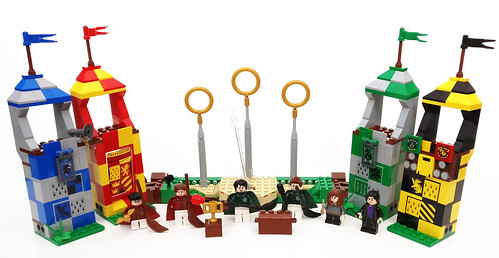