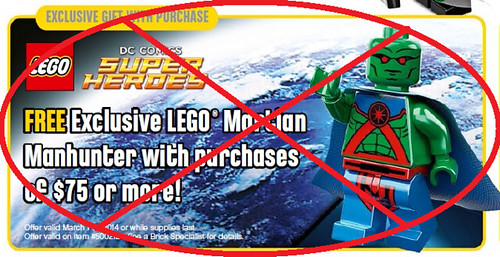 and were trying to get the exclusive LEGO DC Comics Martian Manhunter (5002126) minifigure polybag but were informed that there were no more available. That’s right. There are no more Manhunters available not even two weeks into the promotional period. I’m not that surprised since LEGO fans have been waiting for this guy to get one step closer to completing their Justice League collection. At this time, you can still see the minifigure added to your shopping cart but you will get an email stating there are no more available. Below is that email that people have been getting from [email protected] about the promo. You may still be able to find one in brand stores but I’d call first to make sure they still have some available. Plus, there is the secondary market such as eBay

or Bricklink for you to find these guys. Thanks to Zack and Jimmy for the heads up.

Due to overwhelming demand, the LEGO Shop Martian Manhunter promotion has been ended early for both the US and Canada.

Update: LEGO now lists the Martian Manhunter on the promos page as “Sold Out.”

Update 2: Ace over on FBTB also confirms that he’s also gotten one of these emails.