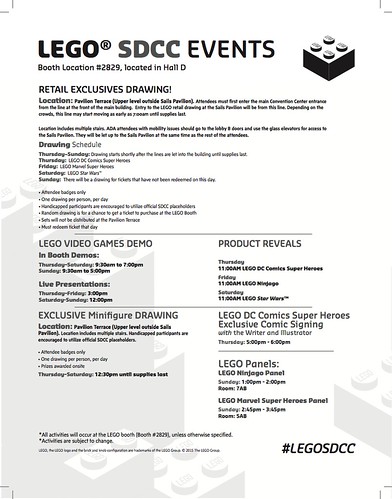 Earlier today, LEGO tweeted out their official schedule for San Diego Comic Con 2015 including details for the retail exclusives as well as the the exclusive minifigure drawings including the LEGO Marvel Super Heroes All New Captain America (Sam Wilson) and LEGO DC Comics Super Heroes Arsenal.

They have also listed out the schedule for their product reveals during the convention. On Thursday, July 9th, LEGO will be revealing the LEGO DC Comics Super Heroes Batman v Superman: Dawn of Justice Batmobile. On Friday, they’ll be revealing a LEGO Ninjago set. I’m guessing it’ll be the direct-to-consumer Ninjago Temple (70751). Finally, for their big finale on Saturday, July 11th, there will be a LEGO Star Wars reveal. We already know that the LEGO Star Wars: The Force Awakens Buildable Battle Figures Stormtrooper will be shown off there but hopefully there will be more sets displayed as well.